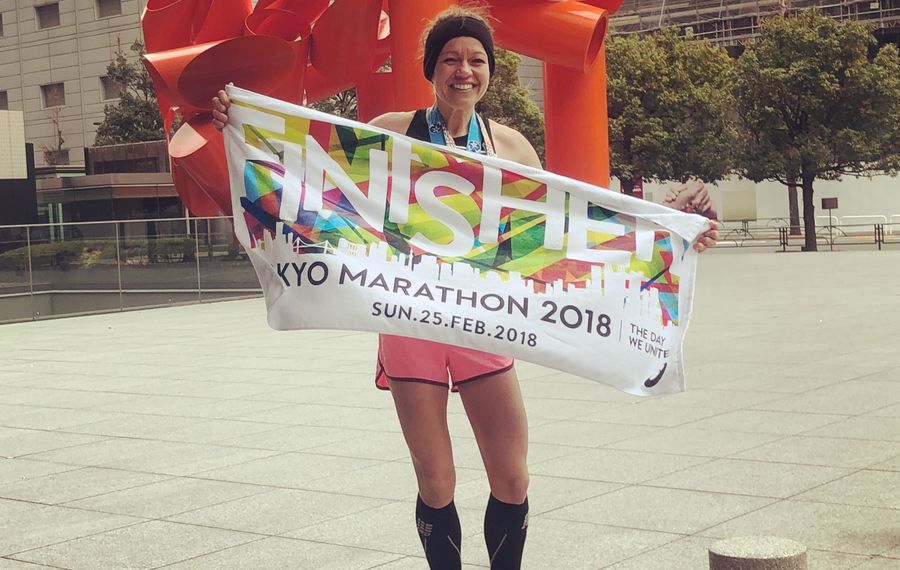 It started where so many great stories about distance running start – with the Boston Marathon.

Brooke Adams had been a decorated runner at Randolph Central High School, including winning sectionals in cross-country her senior year. In her 20s, she wanted to take that love of running into longer distances with her sights on qualifying for Boston in 2014.

There were doubters along the way. But there was a bigger motivator than the naysayers.

"My father was a big support for me when I ran in high school," said Adams, now the assistant principal for Southwestern Elementary and High School. "He has multiple sclerosis and would say to me that you should never take your health for granted. You have one body, take care of it. Use it. He really inspired me.

"When I first said I wanted to run a marathon and qualify for Boston, my uncle laughed at me. People doubted me and my father was like, 'I wouldn't doubt her. If she's going to do something, she'll give it her all.' At that point I wasn't running anything more than a 10K, but after I did a half marathon on a whim, I saw that if I kept around that pace, I could qualify for Boston."

Adams did just that.

And then so much more.

In February she completed the World Marathon Majors after finishing the Tokyo Marathon in 2:58:31.

This means she has finished all six of the major marathons – Boston, Chicago, New York, Berlin, London, and Tokyo. At age 29, she's believed to be the youngest runner to complete the challenge.

This was never really her goal. Frankly, it started a bit on a whim.

After running her first Boston in 2014 she returned in 2015 then decided to run Chicago and New York.

Chicago is a flat, fast course and she broke the three-hour mark. A few weeks later in New York City is where she learned of the World Major Marathon Challenge. There were two other women she connected with and they told her they were applying to run the Berlin Marathon and encouraged her to attempt to run the six major marathons with them. Adams wasn't quite sold.

"I made myself a promise that if I ran under three hours I'd register for Berlin," Adams said. "I thought Chicago was a fluke and maybe I just had a really good, fast day. I promised myself if I broke three hours I could register.

"Then at the end of the New York City Marathon when I hit Central Park, I found myself trying to pick it up. And Central Park is really hilly so I thought to myself, 'Obviously you really want to go to Berlin.' I finished just seconds of breaking three hours and that night I registered for Berlin."

The 2016 Berlin Marathon was her first international marathon which meant plenty of lessons to learn. Like running on a course marked only in kilometers and not miles.

"There was Red Bull on the course which was strange for me," Adams said. "After the marathon they had beer but it was non-alcoholic and they had public showers. Just a lot of things that you don't see in America."

London was the most difficult race to gain entry to for residents outside the United Kingdom. So in 2017 she went the charity runner route and applied to raise money and run for the Multiple Sclerosis Society of the UK.

"I told them my story, about my father, and about what running it would mean to me," Adams said. "Out of 1,000 applicants they only took 100 runners. I definitely put my heart into that application. That race meant a lot to me. I raised $3,000 and had great support from my family and friends to do it."

The final piece of the puzzle was Tokyo. It lined up with winter break and off she went to Asia, where she had to deal with a completely different alphabet and culture. And from a race standpoint, there was adjusting to running without her GPS watch. The buildings are so tall in Tokyo it messes with running watches. All the advice from other runners, including her coach, was to ditch the watch.

"I was pretty nervous and worked up before this race," Adams said. "I love to run with my watch and my coach said, 'No, I just want you to go with overall time and lap where you're at every 5K.' I was pretty nervous. It's all about what you're used to, but I ended up running every 5K within 40 or 43 seconds of each other."

She ran 2:58:31 and was the fourth American woman to cross the line.

While the results provide some motivation and framework and the World Marathon Major medal is pretty sweet, there was more to the accomplishment for Adams.

"It was the journey, the experience, and having a big goal and seeing where that takes you," Adams said. "It was more about getting there. I would probably never have run Tokyo or Berlin, or London either. The series was a motivation. I love traveling and I love running and my two great passions combined."