The Vegas Golden Knights long ago stopped being a curiosity. They're a legitimate Stanley Cup contender, an incredible tale of hockey history unfolding before our eyes.

It's really unfathomable what's going on with the NHL's newest team. But hanging around this crew the last two days, the secret to their success is a two-by-two approach. Two points after two points. Any way you can get them.

Skating and scoring. Grinding. Goaltending. And, as we saw here Saturday, surviving on a day when you're far from your best.

"Sleepy games aren't the most fun to play," goalie Marc-Andre Fleury said after leading the Golden Knights to their 2-1 shootout victory over the Sabres in KeyBank Center. "The building is quiet, everyone is quiet. It's a little tougher to be into it mentally but it was nice to win. It's not going to be perfect every night."

This was one of those matinees that simply lacked spirit until the second half of the third period. The Sabres don't answer the bell too often and the Golden Knights played as if their bodies were still logged at 10 a.m.

"There wasn't much emotion in the game, there weren't many penalties, not much hitting," said Vegas coach Gerard Gallant, whose Jack Adams Trophy for coach of the year is probably already engraved. "It was two teams feeling each other out and it lasted for most of the game."

(Memo to the Sabres: All these home matinees are overkill, a vestige of former GM Tim Murray's quirks to put opponents to sleep and cut down on back-to-backs. Doesn't work. The Sabres are 0-6-2 in them. Jason Botterill should tell the NHL to dump them next year.)

In the end, the Golden Knights got a fluky goal from Deryk Engelland with 4:14 left to tie the game and won it on Eric Haula's sizzler in round five of the shootout. That puts Vegas at 44-19-5 overall and 20-12-3 on the road, breaking the NHL record for most road wins by a first-year club.

After long year, Bailey cashes in his shot with Sabres

Since 1970, no first-year team has even made the playoffs, let alone won a division. And to play into May or even June? Not a remote thought. But if you pick seven or eight teams that could win the Cup, Vegas would absolutely be one of them.

Amazing. The road record really didn't faze too many of the Golden Knights. They've got bigger jackpots to score.

"It's been right from day one we've played that way," said Engelland, the longtime Vegas resident who spoke from the heart on opening night in October in the wake of the mass shooting a mile from the arena that jarred the city and the nation. "It wasn't pretty tonight but we got the win somehow. Our goalie stood on his head for most of the night and you've got to grind them out sometimes." 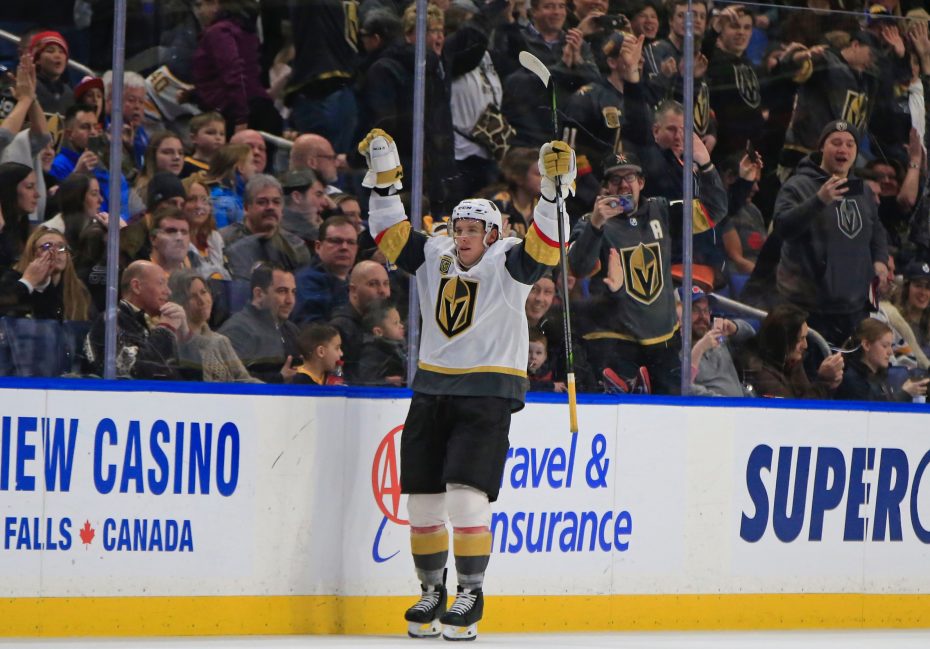 "Early on in the year, everyone was talking about the 'Vegas Flu' and how this team couldn't win on the road," said forward David Perron, whose overtime goal beat the Sabres at T-Mobile Arena in October. "But we're happy we're finding a way to win a lot of games on the road now and turn that around."

Ah, the Vegas Flu. It's what's allegedly been afflicting teams in Sin City all year. The Golden Knights are 24-7-2 at home and the thinking goes that lots of teams are likely taking advantage of the Strip's vast temptations

The day before the All-Star Game in Tampa, Washington star Alex Ovechkin had the media rolling when he was asked why the Golden Knights are such a thing.

"I think it’s the atmosphere over there. It’s not a regular rink," Ovechkin said of rollicking good time in T-Mobile. "It’s kind of like an unbelievable show. You get excited. It’s like you're in a nightclub. It’s like a party. Everybody dancing over there. It’s like, ‘Holy jeez, are we in a hockey game or is this like a pool party out there?’"

When the playoffs come, there will be no Vegas flu. Visitors are going to be all business. We're already seeing that a little now.

Instead of flying directly to Vegas after a shootout win in Minnesota last night, the Anaheim Ducks returned home immediately after the game and practiced at home the next day. Then they skippeed the customary night-before-the-game flight in and went in on gameday, scrapping the morning skate.

Day-of-the-game trips are common in preseason and unheard of when the score matters. But Anaheim won the contest, 2-0, and you have to believe others are taking notes.

The Golden Knights took advantage of the expansion draft rules to build a good club. Fleury has won three Stanley Cups. Four players have 60+ points. Five have 20+ goals. They didn't sell at the trade deadline, instead adding Detroit's Tomas Tatar.

And everyone seems to have a chip on their shoulders. Most of these guys, remember, were dumped by their former team in the expansion draft.

"There's something about it. Every night, somebody faces their old team," Fleury said. "You want to do well and we want the other guy to do well and get him a win. It's been a fun year for that with the success we've had.

"Everybody was saying we were getting a little bit lucky and it was going to stop but we kept coming. We were still consistent. The focus is always on the next game, not things about records, titles, even playoffs. It's always about the next game and being ready to play a good game and get two points."

The Wraparound: Golden Knights 2, Sabres 1 (SO)