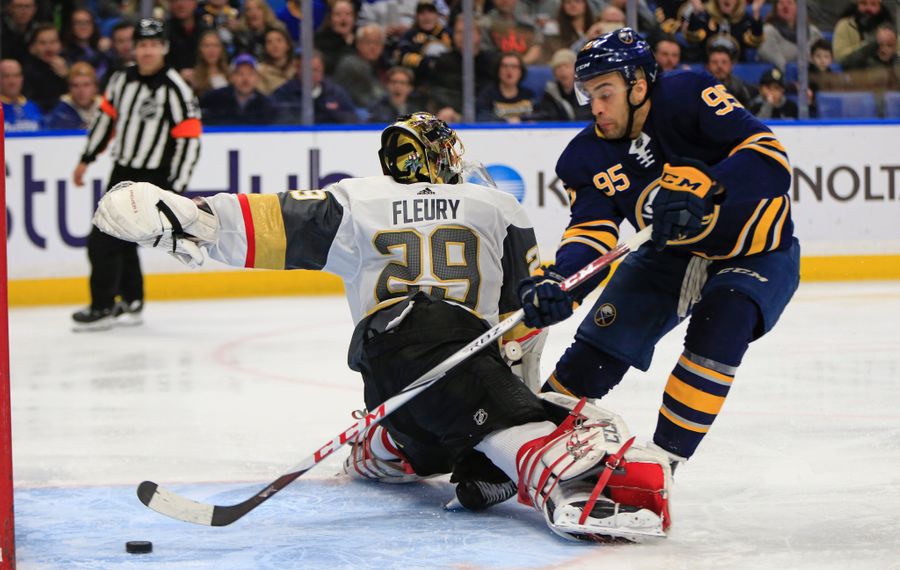 This is not the season Justin Bailey expected. It makes days like Saturday a little sweeter.

The right winger has totaled just 35 games because of ankle and thumb injuries. He went 21 games without a goal in Rochester. It added up to just one stint with Buffalo.

Things are finally looking up. Bailey put up four goals and five points in five games with the Amerks. It prompted the Sabres to recall him Friday, and he scored the only goal Saturday in a 2-1 shootout loss to the Vegas Golden Knights.

"Anytime you can help your team against a good team like that it, it's a good feeling," Bailey said in KeyBank Center. "It's been a season of ups and downs this year, so it was definitely good to get one."

Bailey hadn't played for the Sabres since Oct. 28. He had two goals and three points in seven games, but then he suffered an ankle sprain that limited him to just one game with Rochester in a seven-week span. During his return Dec. 15, he hurt his thumb and was out another month.

"It'll be a year that I'm sure that I'll look back on and be able to use later in my career," the 22-year-old said. "I've been fortunate enough not to be injured my first two years pro at all, and it kind of seemed like they all came at once.

"At the same time, it's something I'll learn from. I'm just going to do my best to finish the year strong and I know in Rochester with a playoff push as well."

Before starting his recent hot stretch with Rochester, Bailey had just two goals and three assists in 22 games with the Amerks. That's not what anyone expected from someone who recorded 43 goals and 81 points during his first two seasons in the American Hockey League.

"When you miss time like that, you forget how to play the right way a little bit," Bailey said. "It's just doing the right things, using my speed, using my size and making sure I was hard on the forecheck and letting my skill do the rest.

"It was tough. Obviously, I want to help the team in any way I can, especially being able to score goals. It was definitely a tough stretch when I first came back not exactly feeling 100 percent like myself."

He credits Amerks coach Chris Taylor for getting him back in the right frame of mind.

"He kept positive with me, just telling me to continue to play the right way and things will start to happen," Bailey said. "That's just what happened."

The final month of the season will be important for the second-round pick in the 2013 NHL Draft. His entry-level contract expires this summer, and he'll be a restricted free agent. He has a chance to show he's part of the future with the recall.

"It's definitely something I wanted to happen before the end of the year," said the Williamsville native. "I played physical. I played with speed. Those are two things I can control, my speed and my size. I just tried to come out here and use both of those. "

It was exactly what Sabres coach Phil Housley ordered.

"He's got to use his speed on the forecheck and get to the net," Housley said of the 6-foot-4, 214-pounder. "He's a big kid, so hopefully he'll bring some energy for us.

"He's been using speed. Those high-ankle sprains, they can be fickle. You can tweak them. It's a nagging injury, but he's finally found his stride and that's why he's going to get an opportunity."

Bailey made the most of his best chance, snapping a scoreless tie with 2:47 gone in the third period. Benoit Pouliot knocked away a Vegas pass at the Buffalo blue line, then chased the puck down the ice. He found Bailey in front, and the winger deked Marc-Andre Fleury to the ice and dumped the puck home while tripping over the goaltender.

"It was a great play by Benny there," Bailey said. "He worked hard to go get the puck and made a great pass. I just did my best to finish it.

"I just wanted to have an idea if the pass came to me of what I was going to do."

What he did was score his third goal in eight NHL games this season. That's a pretty good stat line after finally putting up nice numbers with the Amerks.

"What I've been doing in Rochester can translate to here," Bailey said. "Nothing should change between coming back on the backcheck, getting in on the forecheck. Everything I'm doing there should translate here."

The Wraparound: Golden Knights 2, Sabres 1 (SO)