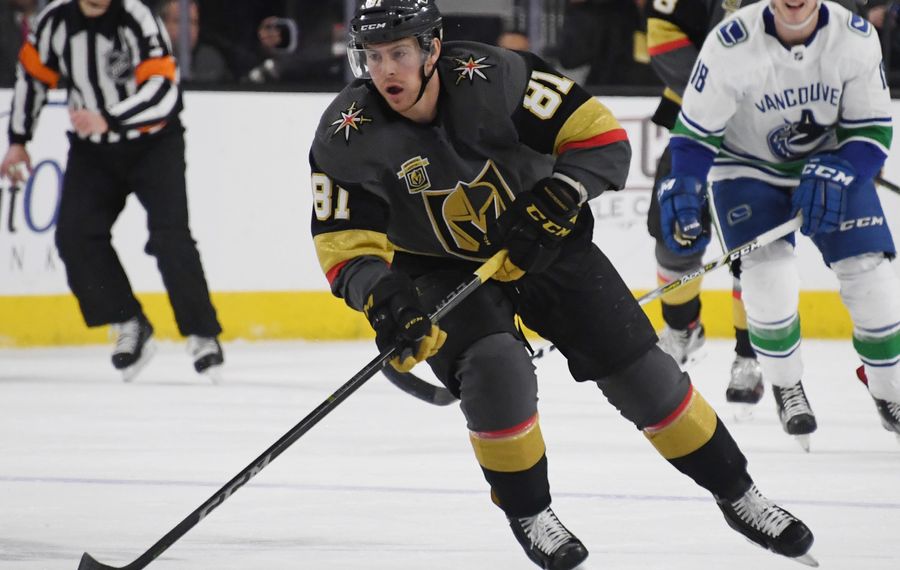 No one saw it coming in October. Most were impressed in December but wondered if it would last, if this record-setting run by the NHL expansion franchise in Las Vegas was sustainable.

With 15 games left in the regular season, including their KeyBankCenter debut at 1 p.m. today against the Sabres, the Vegas Golden Knights have become one of the favorites to reach the Stanley Cup Final. In their first year of existence.

Even the hockey gods think that’s a bit crazy.

If you’ve been wallowing in the Sabres season and have missed the Vegas story, here’s the recap:

The first-year team got off to a hot start, going 8-3-0 in October. Impressive, but the hockey world wondered if the Golden Knights could keep up all that winning.

Turns out they could.

They went 11-1-1 in December, had an eight-game winning streak carry over to the new year, and arrive in Buffalo with four players hitting the 60-point mark for the season.

For contrast, the Sabres have only two players in the 50-point club – Jack Eichel with 53 and Ryan O’Reilly with 50.

Leading the Golden Knights is center Jonathan Marchessault with 65 points, while William Karlsson, Reilly Smith, and David Perron all have 60. All were chosen in the expansion draft. All had some NHL experience.  All were looking for a place to call home.

“You look at the players they have and the depth that they have,” O’Reilly said. “They’re bringing on all these guys with a lot of them coming from successful teams. They’re all veteran players that have been around and when you bring a group like that together, you see how they’ve done, how consistent they are and how they found a way to work. I didn’t expect them to be at the top but you expect them to be at least competing every night and what they’ve done is very impressive.”

The majority of the Vegas roster is comprised of players from the expansion draft, players left unprotected by their former teams. If you think that means there’s a group of players who came together with a chip on their shoulder, Marchessault said you’d be right.

“Yeah, sure. Everybody was part of an organization that they didn’t protect you and didn’t necessarily want you,” Marchessault said Friday after Vegas practiced in KeyBank Center. “It’s definitely hard to take, but it’s a hard business also. You’re never safe. Everybody wants to be part of history, wants to be part of something great. We came in with the same mentality. We wanted to win games.”

And win games they have.

Vegas has run away with the Pacific Division and is in second place in the Western Conference at 43-19-5. Should the Golden Knights win today, they will set the record for most road wins by an expansion club with 20, breaking the mark of 19 set by Anaheim in the 1993-94 season.

“I was (surprised) a little bit early on, like if they could maintain that throughout the year,” Sabres coach Phil Housley said. “They’ve done a terrific job. You put together their speed and transition and their work level, I think that’s one of the biggest things in their identity is that they work. If you put work and speed together, that’s a deadly combination.”

Hard work has been the core identity of the Golden Knights. Because along with that chip on their shoulders, the players in Vegas realize what they achieve collectively is larger than what they are individually.

“We have no, except for our goaltender, any big stars,” said Marchessault, referring to Vegas goalie Marc-Andre Fleury. “I think it makes it fun. Everybody’s humble. Everybody’s ready to be together. We just knew right off the bat if we were going to win games it’s not because we’re talented; it’s because we work harder than the opponent. So we just got to know that and are sticking to it.”

Another piece to the Vegas success story – shedding the “expansion team” label in their own locker room.

“After the first month and a half we were in good shape,” Marchessault said. “We had a great record. But since that time we’ve said let’s keep moving forward, let’s keep playing well. As a team we don’t really talk about expansion team any more. We’re just playing and getting good and we’ve got to work hard every day and get ready for the next game.”