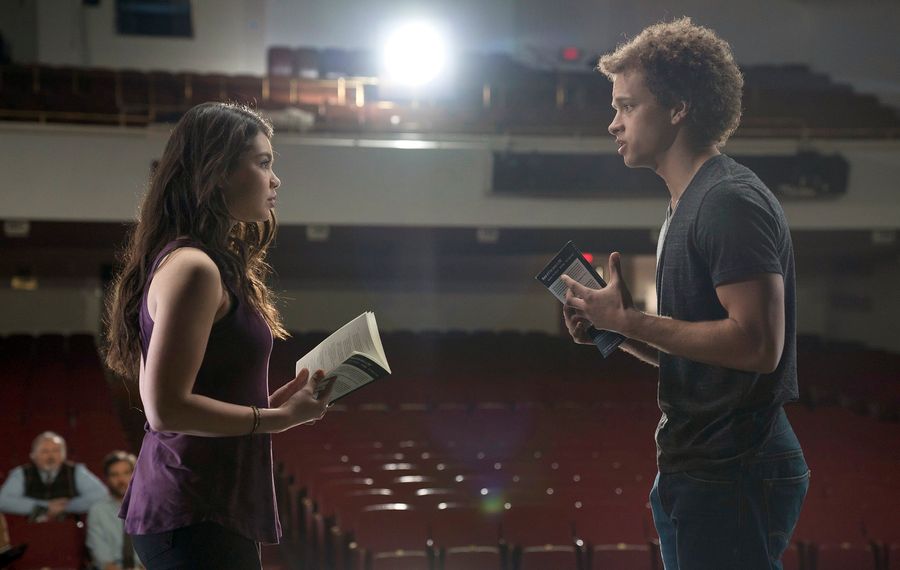 A regular reader of my columns probably realizes I was predisposed to love "Rise," the new NBC high school musical drama series that premieres at 10 p.m. March 13 after the season finale of "This Is Us."

"Rise" is created by Jason Katims, the writer and showrunner of two of my all-time favorite series that dealt with complicated family relationships, "Friday Night Lights" and "Parenthood."

I'm a huge fan of musical theater, and "Rise" revolves around a controversial high school production of "Spring Awakening," which, as luck would have it, is now running through March 18 at Shea's 710 Theatre courtesy of MusicalFare Theatre [read the review here].

But for several of the 10 episodes made available for review, "Rise" didn't do it for me in the same way as Katims' previous series.

Many of the relationships seemed clichéd. The similarities to "Glee" – although in a much more serious tone – didn't make "Rise" seem original. And some episodes were frequently more depressing than some of this year's episodes of "This Is Us."

However, it was interesting enough to stay with it. And the 10th and final episode has such a big payoff that it moved me to tears and won me over. 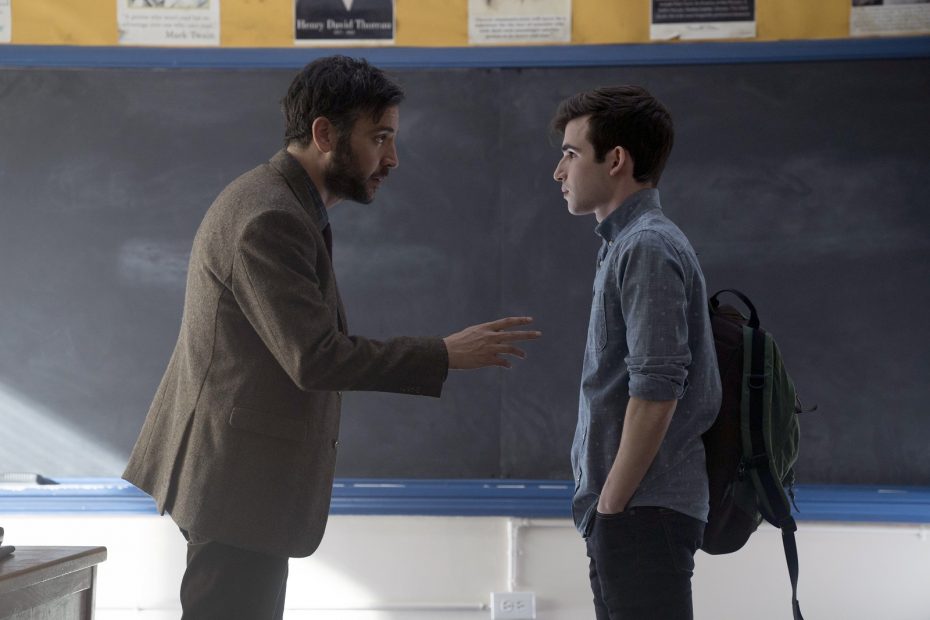 Josh Radnor and Ted Sutherland star as teacher and student in "Rise." (Photo by Peter Kramer/NBC)

As I binge-watched the episodes about a burned-out teacher played by Josh Radnor ("How I Met Your Mother") looking to bring excitement into his life while inspiring students in a small Pennsylvania town, I couldn't help but think, "I wish I could see 'Spring Awakening'" right now."

And I can. In a way, the series seems like an advertisement for the MusicalFare production.

The cast of the local production will have to be extraordinary to get close to the performance level of the cast of the NBC series that is co-produced by Jeffrey Seller, producer of the Broadway mega-hit "Hamilton."

Radnor and Rosie Perez are the big names starring as occasionally at-odds teachers, Lou Mazzuchelli and Tracey Wolfe, striving to direct an honest production with several controversial topics that some parents feel are inappropriate for a high school musical, including teen suicide, homosexuality, transgender issues, infidelity, abortion and abuse.

But the young actors in the cast steal the show, led by Auli'l Cravalho ("Moana") and Damon J. Gillespie. 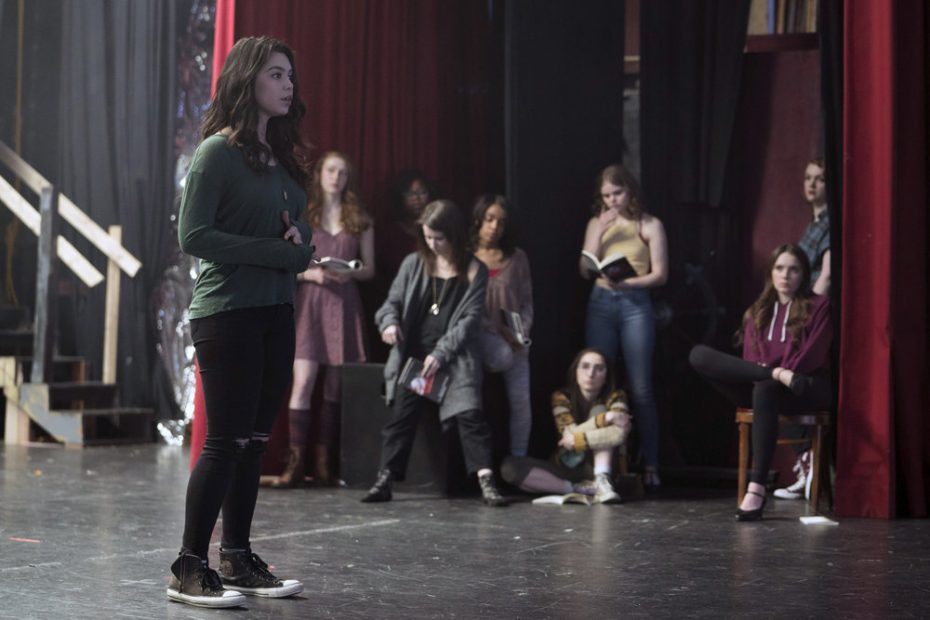 Cravalho is a revelation as golden-voiced Lilette Suarez, the adult in the relationship with her mother, Vanessa (Shirley Rumierk). Lilette tries to balance school, working at a diner, getting the lead in "Spring Awakening" and a relationship with the high school quarterback.

Gillespie, who is as charismatic as Cravalho, plays the quarterback who is trying to balance those roles while dealing with a mother with ALS and a father who thinks he is throwing away the chance to be the next Russell Wilson for a musical. A fan of "Glee" will note the obvious similarity to Finn, the football star-turned-singer played by the late Cory Monteith.

Other standouts are Amy Forsyth as Gwen Strickland, the daughter of the football coach who is watching her parents' marriage dissolve; Casey Johnson as Lou's alcoholic son, Gordy; Rarmian Newton as a foster child, Maashous Evers, rescued by Lou and his wife; and Ted Sutherland as Simon Saunders, whose religious father abhors the subject matter of "Spring Awakening."

The clichéd negative portrayal of the religious father is likely to be one of the biggest turnoffs of the series for conservative viewers. The questionable moral behavior and insecurities of some of the adults also make for some very dark viewing.

In a January interview in Pasadena, Calif., Katims was asked if NBC had any apprehension about adapting the show because broadcast television can be as antsy about controversial topics as PTAs.

"When I was writing the pilot, I had to kind of think what was the right first show for them to do," Katims said. "I knew I wanted it to be something that was going to be two things: one, material that was kind of provocative, because that was kind of what essentially was the idea of Lou coming in and taking over this program was sort of about, and also I wanted it to be a show that … thematically connected to the stories that these characters were going through.

"I was really attracted to 'Spring Awakening' because it was a story about teenagers. And it felt, to me, like the idea of seeing teenagers playing those roles would be a powerful thing."

"There wasn’t any opposition from anybody about taking that on," added Katims. "We decided that was the direction we wanted to go, that we were supported."

Another critic noted that the teacher in "Drama High," the book upon which the series is based, was married and had a child before coming out later to his wife as gay. Radnor's character is straight. The high school in that book also was referred to years ago as the "real-life 'Glee.' "

"I really felt like I needed to make it… kind of my own story," said Katims. "And I definitely didn’t want to shy away from issues of sexuality and gender, but was inspired to tell the story of Michael (a transgender character), and Simon, who’s dealing with his emerging sexuality and growing up in a very sort of conservative religious family.

"Those stories … resonated with me kind of as a storyteller, and I wanted to kind of lean into that. And then really with Lou’s family life and Lou’s family itself, there’s a lot of re-imagination."

Many of the stories do eventually resonate.

Just don't expect "Rise" to get a rise out of you at the start on Tuesday.

New upbeat 'American Idol' might be arriving at the perfect time