It's that glorious time of the year where the teams at Far West Regionals battle for victories and the right to head to Binghamton to play for the ultimate prize in New York State public high schools boys basketball.

It's also the joyous time where the Manhattan Cup champions are one win away from earning state titles and advancing to the Federation Tournament of Champions at the end of the month.

Remember the Far West Regional quintuple-header takes place at Buffalo State beginning at noon Saturday with the Class D clash between East and Clyde-Savannah. The Class C regional and Class B at 1:45 and 3:30 p.m. conclude the first of two paid-admission sessions. The second session begins at 7 p.m. with unbeaten West Seneca West facing reigning state Class A champion Irondequoit. Niagara Falls and McQuaid Jesuit follow in the Class AA showdown.

Without further ado, let's take a look at this weekend's postseason matchups.

This is the third year in a row Niagara Falls has reached the state quarterfinal round. It hopes to put in a better showing than their previous two where they got stomped by eventual state champion Aquinas (2016) and state runner-up Fairport (2017).

The Wolverines face a familiar foe in McQuaid, who they defeated back in December, 76-60. In that contest, Falls recorded roughly 20 assists on its field goals. The Wolverines will need to share the ball that well again and crash the boards as a unit in order to get past a Knights crew that has found itself since a 4-7 start. They have won 12 of their last 13 games. Part of the reason for the Knights' early-season struggles was adjusting to the loss of star player Isaiah Stewart to prep school. The junior is a five-star recruit whose suitors include Duke. 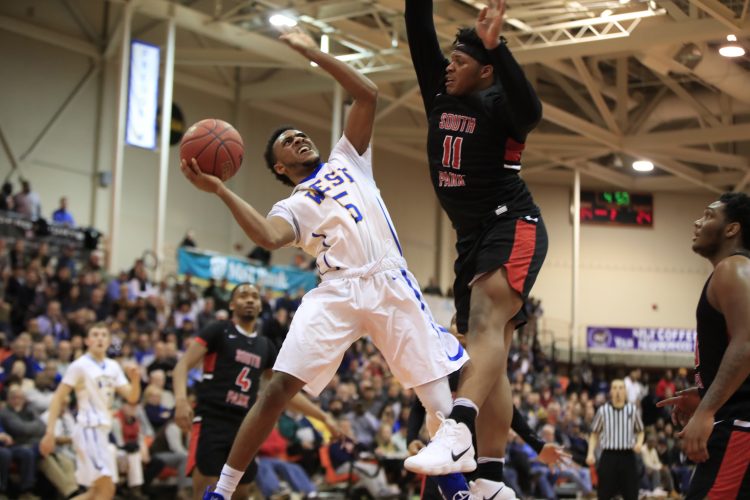 Juston Johnson has had the hot hand in the past two games for West Seneca West, which faces defending state champion Irondequoit at 7 p.m. Saturday (Harry Scull Jr./ Buffalo News)

In order to be the best, one must beat the best. If unbeaten West Seneca West (24-0) wants to reach the final four it must get past defending state champion Irondequoit (21-3).

Irondequoit is known for its stingy defense -- yielding just 44.25 points during the playoffs. The Eagles force teams to play a half-court game and held top-ranked Buffalo News large school Canisius to 48 points (roughly 25 points below its season average) in a one-point loss back earlier this season.

West loves to push the pace, breaking its foes with its press and scoring off turnovers. Still, West has shown it can play a half-court game if pressed into it. "If we can take care of playing the way we play and be ready for what they do I think we have a really good shot," West coach Des Randall said.

Look for junior point guard Juston Johnson (24.0 ppg, 7.0 apg) to have the ball in his hands a lot. He scored a career-high 43 points in Tuesday's overall Class A final win over South Park. He had 38 in the Class A-1 final win over Williamsville South.

Should the Eagles devote all their attention to stopping him, that could open room for junior Adrian Baugh (18.1 ppg, 10.2 rpg) or senior Alex Wayland who holds the West record for career three-pointers to get loose. Jared Drumgoole is Irondequoit's top player (21.5 ppg), while point guard Freddy June was the Section V Football Player of the Year. Rebounding is key as the Eagles held a 50-20 edge on the boards in Wednesday's win over Wayne.

Health Sciences (20-4) survived its encounter with B-1 champion Olean to prevent the Huskies from advancing to regionals as a Class B school for the first time since 2002.

Health Sciences, last year's state semifinalist, faces a first-time Section V champion in Greece Odyssey. Odyseey (16-8) has been solid all season and looks to rely on team ball to lead it to success again.  They do not have much height which could pose a problem since Health Sciences is led by 6-foot-7 University of Tennessee commit Davonte Gaines. He can post up or run the point.

Kameron Briggs not only is a good secondary scoring option but a tough defender for the Falcons. Tysheen Lott, Tayvion Nelson and Josiah Haygood have been known to hit shots at key times for Health Sciences, whose only losses have come against Class A or AA teams.

Tapestry Charter versus Northstar Christian could very well be a high-scoring affair. Northstar entered the postseason averaging 89.0 ppg. Top player Miles Brown is a junior who has already surpassed 2,000 career points and could very well set the Section V career points record next year. He averages nearly 31 ppg and went for 39 in the C-1 final against Pembroke.

"We have to least try to contain him as much as we can," Thunderhawks coach Mike Ester said. "It'll be hard to stop him."

It's hard to ignore that Tapestry did hang with Class B champion Health Sciences in both regular-season meetings.

The East Panthers (16-8) are back in regionals for the first time since 2015 when they played in Class B.

Coach Starling Bryant's crew faces Clyde Savannah (21-4) and the key will be to prevent Clyde from scoring easy baskets in transition. The Panthers have multiple defensive tricks at their disposal but could very well opt to use their quickness to press the Section V champ into mistakes. The Golden Eagles are led by brothers Marcus and Derrick Chance, who average 26.0 and 20.5 ppg.

East's top player is senior Willard Anderson at nearly 26 ppg. When teams tried to take him out of the scoring equation last week, however, other Panthers rose up to burn the opposition in the sectional semifinal and final. Justin Allen and Waunya Shaw each average more than 14 ppg while Jahahd Maryon is a threat from beyond the arc.

With the Manhattan Cup already secured, Park looks to add a second postseason championship in the Class A Catholic state title.

It won't be easy against Nazareth of Brooklyn. Tip-off is at 3 p.m. Sunday at Villa Maria.

The Kingsmen are an uptempo team that plays full-court pressure and if that doesn't work will opt to trapping foes, according to Pioneers coach Rich Jacob.

Park will need to protect the ball, something junior point guard Noah Hutchins does well. It also will need to slow down Naz's top players Bryan Needy and Dre Turnipseed. The Pioneers have the size advantage with three regulars in the rotation who stand at 6-foot-9 or taller.

"We feel like with our strong guard play we should be fine against the pressure," Park coach Rich Jacob said. "It's a state championship game and we have to come to play."

The Class B state Catholic final at 1 p.m. Sunday kicks off the action at Villa. Niagara Catholic (17-8) faces Regis of New York City (18-8). Catholic likes to play uptempo. Regis likes to get back fast on defense and plays man and zone. Regis also likes to share the ball. Joe Manfredi and Liam Gallagher are Regis' top scorers.

Jalen Bradberry averaged 24.5 points during the Manhattan Cup tournament for Niagara Catholic and can hit the three or take it to the basket. Haakim Siner averages 12 ppg, 11.1 rpg, while freshman Mehki Starks is a relentless defender for the Patriots.