Workers and visitors in the Innovation Center on the Buffalo Niagara Medical Campus have a new healthy dining option – The Byte Wholesome Foods to Go vending machine.

Chicken and veggie Buddha Bowls, salads and snacks, and drinkable yogurt, Blackman Farm juices and Bootleg Bucha are among the staples in the refrigerated food purveyor, installed late last month as part of a larger effort to encourage healthier behaviors on the 120-acre downtown campus. Prices range from about $3 to $10.

Farmers & Artisans Market in Snyder keeps the vending machine stocked and Elizabeth Machnica, healthy communities catalyst with Buffalo Niagara Medical Campus Inc., guides the effort. The BNMC is a nonprofit agency formed in 2002 to encourage collaboration and efficient development on the medical campus.

Machnica and Farmers & Artisans owner Julie Blackman hope employers on the campus – and beyond – will consider installing similar vending machines as part of their overall employee wellness programs, after the two learn how Byte can work best in greater Buffalo.

"The company is based in the San Francisco Bay area," Blackman said. "They have 500 units out in California and a couple in New York City but this is the first one in Western New York. We're trying to ramp up the marketing on it now, be creative. We know that people want local foods but we have to have the convenience factor. This is that next level of convenience, freshness and technology."

Q: How does it work?

Blackman: It's a very simple technology. It's radio frequency tagging of each item. There's a little iPad mini on it. You swipe your credit card and it releases the door. There are flat panels that read the tags. That happens instantaneously. You can take something out and look at it as long as the door isn't shut. When you take out things and shut the door, the machine reads the tags again and subtracts what's been removed … then charges accordingly. You can leave an email address, hit send and get a receipt.

Q: How can you track the items? 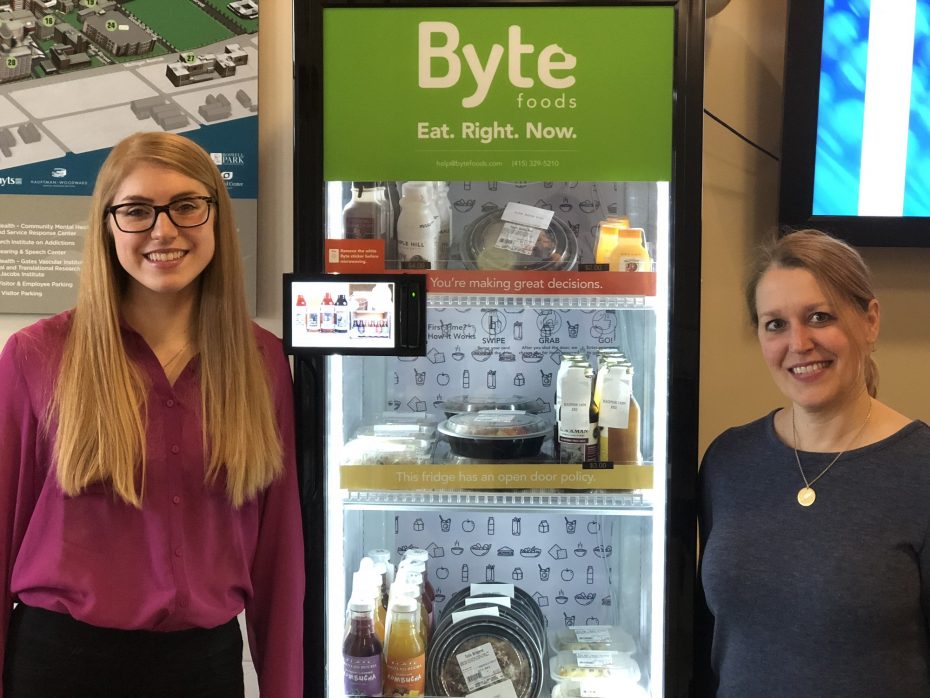 Elizabeth Machnica, left, healthy communities catalyst with Buffalo Niagara Medical Campus Inc., and Farmers & Artisans Market owner Julie Blackman, right, have teamed up on the Byte healthy vending machine pilot project. Machnica says the machine costs $2,500, roughly half what it costs for a conventional vending machine, though a monthly technology fee is part of the operating cost. (Sarah Warner/Special to the News)

Blackman: We can operate it off our computers and laptops back at the store and on my phone, at home, and know exactly what was sold. I know the inventory instantly, as well as can monitor and track transactions, refrigeration temperature, things like that. I sometimes find myself saying, "You guys, we just sold four Buddha Bowls."

We're using this pilot at the Innovation Center to work out technology. We've found we have to be strategic with our tags. There are also logistics, figuring out what days to get down here for deliveries, the shelf life of food products. But it's an exciting next level of farm-to-table.

Q: You say most of the food is prepared in the kitchen at your business. How often do you restock?

Blackman: We've been coming down daily as of late because of working on the technology. We would love to clear this out every other day and come down to restock. Some things have a shelf life of four days (or longer). We try to cover breakfast, lunch, dinner, snacks and beverages. We're working on a breakfast burrito that can be microwaved and on the packaging of deli-style sandwiches.

Q: How much did this cost to set up?

Blackman: The way we've set it up for this pilot program is that they purchased the unit, paid for the shipping, got it connected and I'm covering the monthly transaction fee ($225) and filling of the product. The tags cost 15 cents each. Byte runs the credit card transactions, too. It's a little bit higher than what we pay at the store but they're a business making their money as well. For a business, this isn't a big investment.

Machnica: Especially if you don't have a cafeteria. The other thing I've toyed with here or elsewhere is getting some sponsorship, an insurance company or a bank, to cover some costs. You could put up a banner and that's a wonderful thing, a good message, for your corporation.