Instead of marshmallow chicks for Easter, Steve's Wonderful World of Pets in Amherst is offering the real thing.

Owner Steve Lane says the baby chicks that he rents out during this season never again will have it so good.

"These come out of the food industry for a couple weeks and they get some loving by kids. I think we're doing a service for these chicks," Lane said Wednesday in an interview at his store, as he stood next to a cage on the floor filled with 3-day-old chicks.

But critics – including many on social media – say Lane's "rent-a-chick" program is a terrible idea that offers warped lessons about animal welfare to children.

Lane may not violate any laws, but that doesn't mean it's humane, they said.

"We don't think this is right," said Gina Browning, a spokeswoman for the SPCA Serving Erie County.

Lane said he has rented out chicks for 15 years from his store on Sheridan Drive, east of Evans Street. This year's program has gotten far more attention than usual because, Lane suspects, he created an event on Facebook that reached people who don't shop at his store – and who don't like what he's doing.

Lane posted a photo with the Facebook event that shows chicks dyed pastel colors. Lane said he used dyed chicks the second year he offered the birds for rent, after his supplier asked him if he wanted "Easter chicks."

He soon found out it's illegal in New York to traffic in dyed chicks. So he went back to using uncolored chicks, though he still uses the original photo to promote the rentals.

"It's a great picture," Lane said.

State law strictly regulates the selling, or the giving away, of chicks, but it says nothing about the renting of chicks, said Browning, calling it a loophole.

"Part of the problem here is that the law is so vague," she said.

Lane said he started renting out the chicks as an antidote to the habit of people buying chicks, or rabbits, around Easter and then getting rid of the pets after the holiday excitement wore off.

"The idea was to stop disposable pets," he said. The SPCA Serving Erie County, for similar reasons, used to stop the adoption of rabbits during the weeks leading up to Easter, but it ended that policy two decades ago.

Lane gets his chicks in batches of 50 from a commercial hatchery in Missouri. He's already rented out the first batch, and the second batch of 3-day-old chicks just arrived at the store. They're kept in a circular cage, under heat lamps, and they consume special feed. 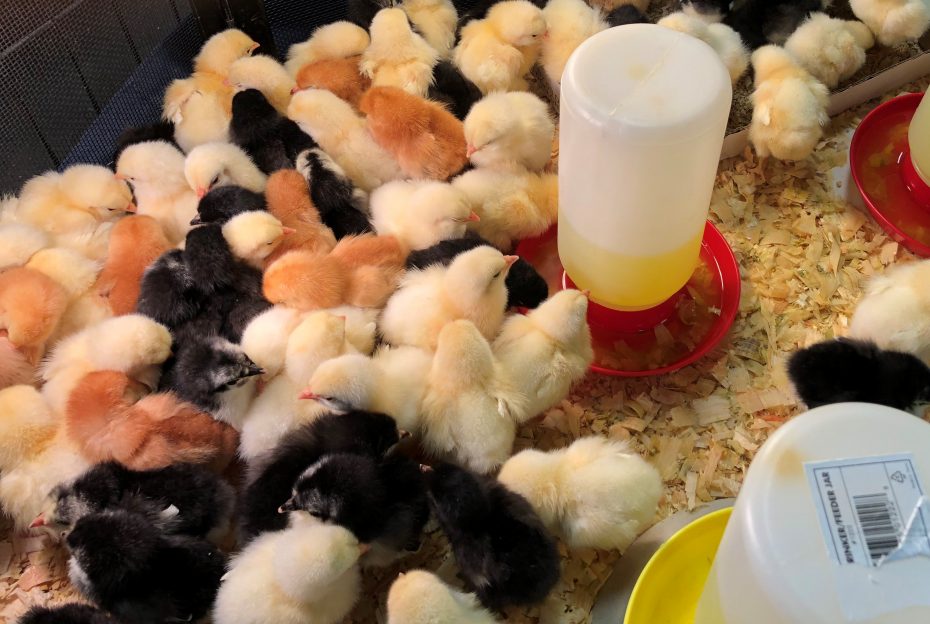 About 50 3-day-old chicks crowd each other in their cage Wednesday at Steve's Wonderful World of Pets in Amherst. (Buffalo News/Stephen T. Watson)

Customers pay $39 for a kit that includes two chicks, a container they can live in, a heat lamp, medicated feed and a device that provides water. They also pay a $10 deposit that is refunded when they return the chicks after Easter.

Lane said he doesn't screen anyone who comes in to rent his chicks, nor does he keep track of the chicks' health and care during the rental period.

He said he rented out about 200 chicks last year, including many to teachers for their classrooms, and all but two came back. He said he didn't know why one customer had two chicks die on her, but that rarely happens.

"Not only are we not mistreating them, we're giving them an extra special event in the life of a chicken," Lane said. "The normal life of a chicken is they're hatched, they go to a farmer and they either lay eggs or they become dinner and that's it."

After his customers return the chicks, he said he offers them to friends who raise chickens.

The SPCA, in a Facebook post of its own, said animal-welfare organizations consider the practice of renting chicks inhumane. Browning said she wasn't aware of any other store in the area that provides this service.

She said Steve's Wonderful World of Pets should train prospective renters in the proper handling of the chicks and should monitor their care during the rental period.

Browning said she wants to know exactly where the chicks come from and where they will go after they return to the store. And she wants to see any records that show how many chicks are returned healthy and how many have died each year.

"These are tiny little lives. These are very fragile animals. Mishandling can easily lead to death," said Browning, who said there are better ways to educate children about the raising of chicks.

As word of the program spread on Facebook, users inundated the store's event page with sharp criticism of the store and the chick rentals.

"Where is your humanity?" Linda Mann posted Wednesday afternoon.

"Are you for real? You disgust me. Cruel. Exploitative. Wrong," wrote Helen Cooper.

Lane said he's not fazed by the blowback. "I think it's a specific group of people that see animals a little differently than we do," he said.

But he will make changes next year. He said he'll plan a proactive response that better explains why he offers the chick rentals.

And he's going to swap out the picture of the dyed chicks for another one showing their natural coloring.