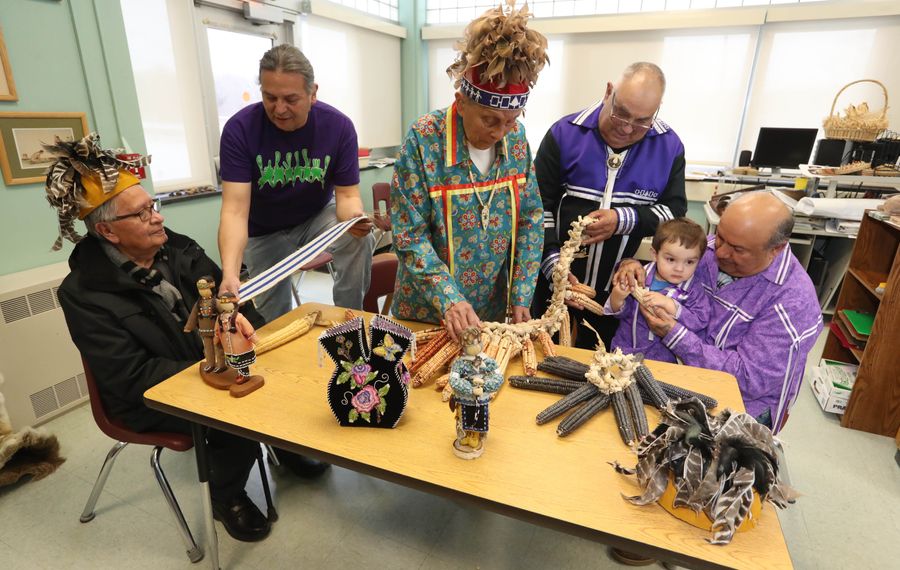 TUSCARORA NATION – When the Tuscarora History Group put together its first open house last year, members had no idea how many people would show up.

The answer: a lot.

Several hundred people, many familiar faces but some welcomed newcomers, filled seats in the large meeting room, flocked to the displays and informational tables, or purchased books, beadwork and food.

"We had a lot of really good speakers and a good program, and we hoped people would turn out for it," said Vince Schiffert, a teacher at Niagara Wheatfield High School and at Tuscarora Indian School and an active member of the group.

In fact, if there was a complaint about the day's events, it was that there was too much to do and see. With four main talks followed by 12 shorter ones offered in two rooms simultaneously, people had to choose between talks on history and activism, between language and beadwork, between the Nation's waterways and bow-and-arrow making.

"A lot of people wanted to hear the speakers and they weren't able to visit the booths," said Angela Jonathan, a member of the History Group.

So this year, members of the History Group have narrowed the focus of the "Skaru:re Rez Life" day, scheduling just one talk at a time and including a pause in the presentations for people to visit the tables. 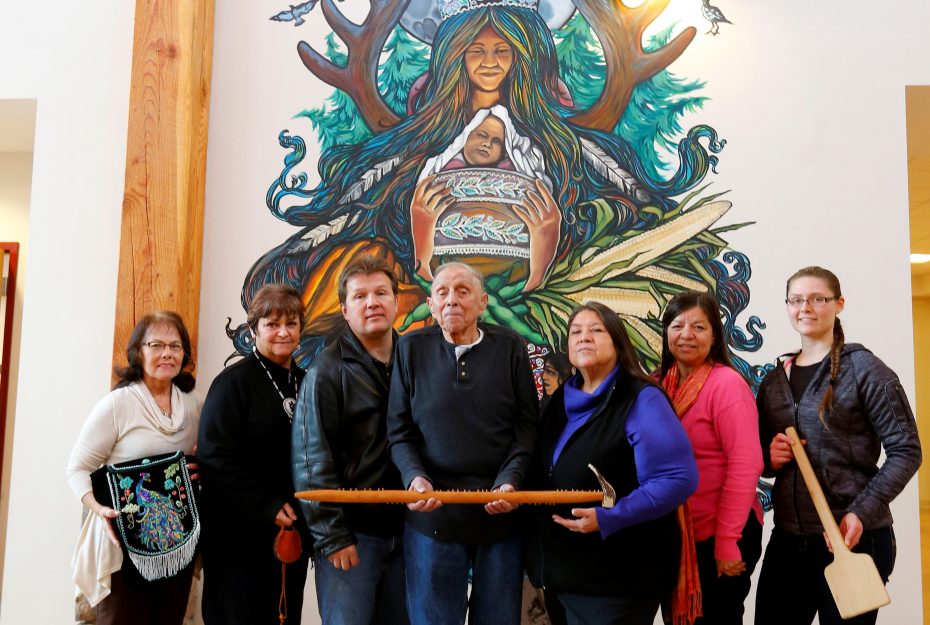 Admission and parking in the Nation House's lot are free.

Last year, "You could feel the positive energy," said Jonathan. "It made me feel so good that we did something that people enjoyed coming to, a community event that didn't cost a dime."

In fact, a young woman told Jonathan that the day's events reminded her of the beloved May culture night at the Tuscarora School, which has been going on since the 1980s.

Last year's crowd included people from the Tuscarora Nation, other local reservations, and those with no ties at all, just an interest in Tuscarora history, society, culture and language. Schiffert said some elders from other nations also attended, including people who remembered long-ago Tuscarora friends.

Perhaps more than any visitors, the day went by in a whirlwind for organizers. Schiffert himself met a few people he hopes will attend again so he can reconnect with them.

Jonathan was assigned to act as moderator in a room, making sure that presenters stuck with the schedule. "That was difficult, because many had so much to say and so many people wanted to ask questions," she said.

Jonathan had an unexpectedly emotional moment during the talks. Her cousin Isaac Brascoupe, who spoke on bow and arrow making, started off his talk by thanking his parents and his grandmother. "That moved me, the way he said it," she said, honoring immediate ancestors who encouraged the children's explorations outdoors. "The outdoors were central to our lives growing up," she said.

This year's speakers will include internationally known award-winning beadwork artist Grant Jonathan. "He is very knowledgeable and you'll definitely want to hear him," said his sister-in-law, Angela Jonathan.

Grant Jonathan said he plans to bring pieces from his extensive collection of historic beadwork made by Tuscarora people since the 1800s to sell to tourists at Niagara Falls. He plans to speak about the history of Tuscarora beadwork, a discussion of the various souvenirs, called whimsies, that were made and sold at Niagara Falls, he said. 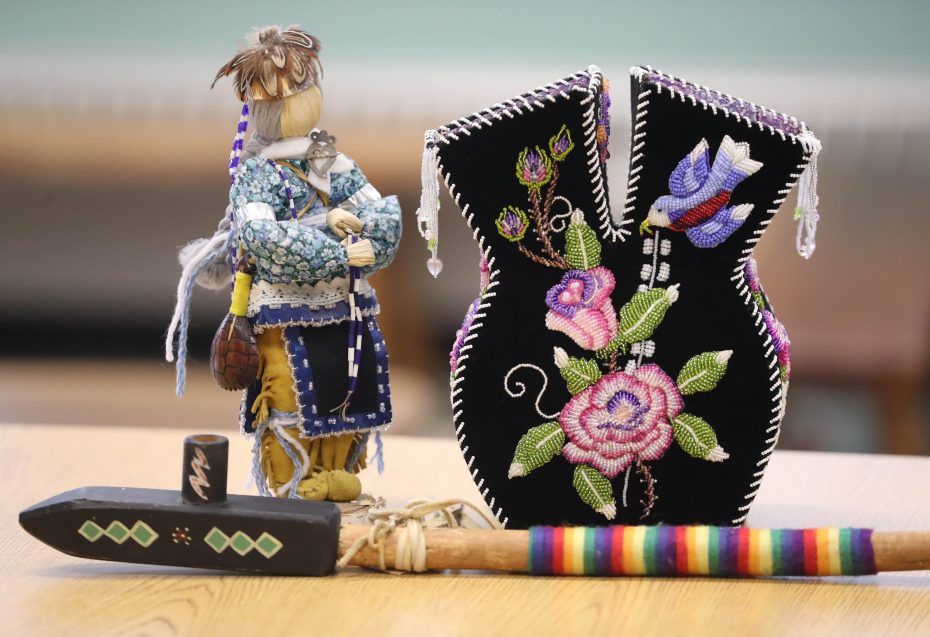 Among the artifacts that will be displayed and discussed at the open house are, at left, a corn husk doll made from Tuscarora white corn, a Tuscarora raised beaded whimsy in the shape of a vase and, in front, a pipe that commemorates the fight of the Nation against the State Power Authority in the 1950s. (Sharon Cantillon/Buffalo News)

Four traditional beaded strawberries will be hidden around the display tables, and those who find them may keep them. The strawberry is important in the Husenosauneee creation story, because Skywoman brought the strawberry to Turtle Island.

Yehsenaruhcreh Wendy Bissell is one of the founders of the History Society, which began as a book club in her home years ago. She was reading David Cusick's groundbreaking 1828 book, "Sketches of Ancient History of the Six Nations," and invited several other people to read it with her and discuss it.

Eventually the group began to tell their own family stories as they read Cusick's book.

In 2013, members of the group were among three busloads of people who traveled to the onetime Tuscarora homeland of Snow Hill, N.C., from which their ancestors were driven out in 1713 by colonists and their Native allies. After a difficult and lengthy trek north, the Tuscaroras were admitted to the Iroquois League in 1722 as the younger brothers of the Cayugas, joining the Mohawk, Onondaga, Seneca and Mohawk peoples. Their history says they were returning to the Nations to which they had once belonged.

The group, which has about 20 active members, ranges in age from Chief Leo Henry, who is still active in his 80s, to several college students. "We have both ends of the spectrum," said Bissell.

Most people in the group – and many well-known people with roots at Tuscarora who  plan to return, such as Grant Jonathan – have personal areas of expertise, whether it's art, history, food, environment, sports or music. All the churches on the Nation have been invited and are expected to have tables.

"The day will focus on all kinds of topics," said Bissell. "Together, they make up rez life."

"I can guarantee another emotionally fulfilling event," said Angela Jonathan. "I knew we had a lot of awesome people, but to have everybody together, like the scholars, Jane Mt. Pleasant, Jolene Rickard, Steve Dubuc and Rick Hill, it was inspiring and so valuable. And Chief Leo Henry always represents us well."

For more information, go to facebook.com/TuscaroraHistory or call the Nation House at 264-6007.