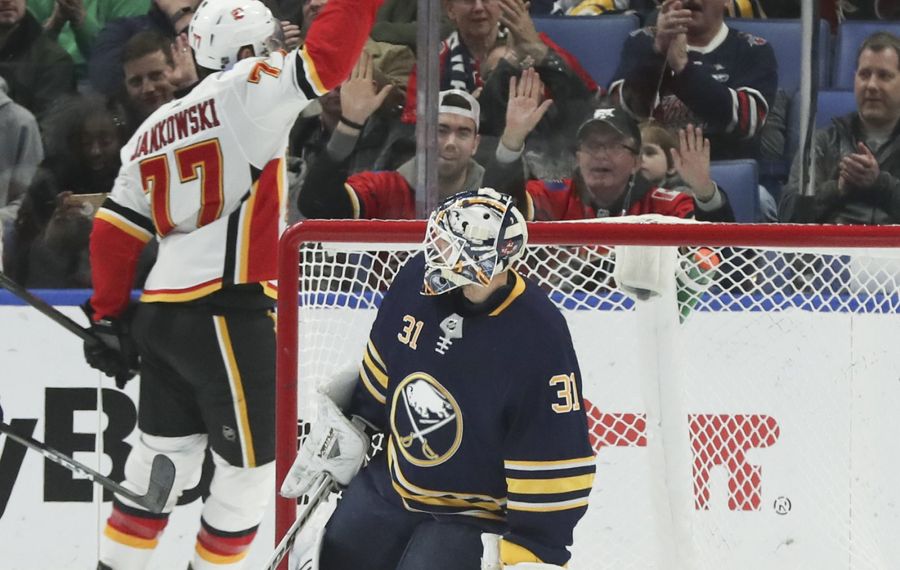 The Calgary Flames had never won in KeyBank Center. They made up for lost time as the Buffalo Sabres embarrassed their logo again.

The Flames trounced the Sabres on Wednesday, picking up a 5-1 victory. The Sabres watched the Flames skate around for good chunks of the game, tossing away the goodwill garnered from Monday's intense victory over Toronto.

As the Sabres have proved this season, past success means little. The boos reminded them.

The Sabres ended a shutout bid by David Rittich on a goal by Casey Nelson with only 17.1 seconds to play.

Inside the Sabres: It comes down to a matter of respect

In front: The puck continually found the front of the net in the opening minutes, and Sam Bennett connected with 5:35 gone. After the puck bounced off the back boards, Flames forward Mark Jankowski slipped it through goaltender Chad Johnson to the top of the crease. Bennett was alone to pounce on his 10th goal of the season.

Doubling up: Jankowski added a goal to his assist three minutes later. His shot from the top of the left circle slipped under Johnson's arm for a 2-0 lead.

Tripling up: Calgary opened its 3-0 lead with five minutes gone in the second. It won a faceoff in the Sabres' zone, and defenseman Mark Giordano carried the puck to the center of the blue line. He fired a slap shot that bounced off Sabres right wing Jason Pominville in the high slot and went through Johnson's pads.

Quadrupling up: The Sabres failed to account for the Flames' leading scorers, which was a bad move. Calgary left wing Johnny Gaudreau picked up his 55th assist with a cross-ice pass to Sean Monahan, who buried his 30th goal.

That's it: Johnson went to the bench in favor of Robin Lehner following Monahan's goal with 6:01 gone in the second. The netminder stopped 18 of 22 shots while his teammates stood around.

Quintupling up: Giordano again fired from the point during a Calgary power play, and the puck bounced off a player in front. It went directly to Dougie Hamilton, who made it 5-0 with 1:21 left in the second.

Punch, not snow: Flames scorer/agitator Matthew Tkachuk skated toward Lehner after the goalie covered a puck and attempted to spray Lehner with ice shavings. Lehner quickly thrust his left glove into Tkachuk's jaw, and Sabres forward Jordan Nolan followed with a hit that knocked down Tkachuk.

Intriguing scratch: The Sabres welcomed recent trade-acquisition Danny O'Regan to the team, recalling him from Rochester in the morning. He didn't play, however, as the Sabres reinserted Seth Griffith. O'Regan, acquired as part of the Evander Kane trade to San Jose, took part in the pregame warm-ups.

Next: The Sabres boarded their charter after the game and flew to Ottawa, where they'll face the Senators on Thursday night. Buffalo will host the Vegas Golden Knights on Saturday in the expansion team's inaugural visit.