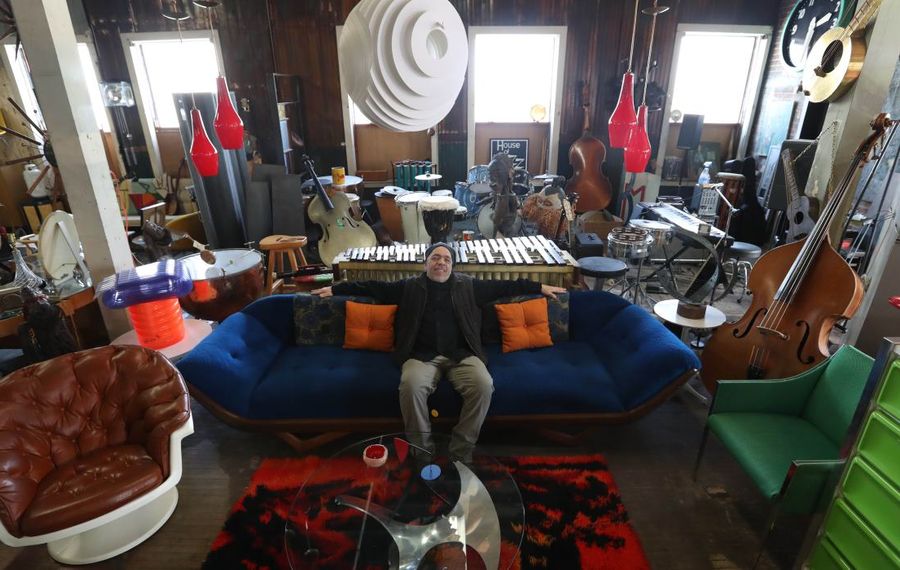 Buffalo collector Michael Merisola might not have received a thank you from stage during Sunday's Oscar ceremony, but he deserves some for the credit for helping this year's big winner look its best.

Merisola's business, CooCooU27, headquartered in a sprawling warehouse on Tonawanda Street, provided some two dozen set pieces for the Oscar-laden film "The Shape of Water," which won Academy Awards for production design, best picture, best director and best score during the 90th Oscars on Sunday.

Among the objects CooCooU27 supplied were the main character's dining room set, industrial lighting fixtures rescued from Buffalo factories, a mid-century laundry bin used to transport the amphibious creature featured in the film, an assortment of vintage cocktail shakers and one of 50 mint-condition vacuums Merisola bought from the widow of a local door-to-door Hoover salesman.

Shane Vieau, one of the film's set decorators, has long had Merisola on speed-dial.

"The guy has an amazing, very, very large collection of art," Vieau told Architectural Digest in December. "I always go back to him and I always start with him."

The CooCooU27 space is housed in a brick warehouse on an industrial stretch of Tonawanda Street. Behind a discreet metal door, stairs lead past a clanking workshop and storage facility on the ground floor and into a cavernous display room overflowing with thousands of vintage chairs, paintings, sculptures, lamps, desks and living room setups arranged in pristine vignettes.

Merisola's business, launched in 1987, has long rented and sold props to filmmakers shooting big- and small-budget movies and commercials. His 15,000 square-foot warehouse and website have become indispensable for decorators and designers looking for the kind of mid-century furniture, art and ephemera he collects from estate sale pickers, auctions and dealers throughout the northeast.

"They've been renting from me for years for different projects and films," Merisola said, adding that Vieau used about 20 to 25 pieces from his collection, including "modernist home furnishings, lighting, industrials, work tables" and surgical lamps.

CooCooU27's film rental and sales business benefits from Buffalo's proximity to Toronto, where many big-budget films are shot, and to New York, where many major commercial shoots happen.

For a film recently shot in Toronto, Merisola said, he rented out his substantial collection of African masks and sold a group of animatronic mannequins that once stood in the windows of the AM&A's department store in downtown Buffalo.

Vieau, who did not respond to a phone call seeking comment, hits CooCooU27 up for props on period films, contemporary movies, or, Merisola said, "if he needs just weird stuff.

"This last movie we did, there was like some crazy, whacked-out guy, a collector, so they needed a bunch of stuff for his office. So they rented all my African art, all kinds of weird props and crazy-looking stuff. Just for this one scene that they were shooting in Toronto."

For another recent shoot, he got a call from a crew shooting a commercial in New York City requesting next-day delivery of a turn-of-the-century prison gate Merisola speculated could might have originally been from the Attica Correctional Facility.

The local store CooCooU27 had a hand in helping to shape the look of the Oscar-winning film "The Shape of Water." (Photo courtesy Fox Searchlight)

Despite his long involvement in the film business, Merisola's reputation has until lately been contained to industry insiders. That changed with Architectural Digest's coverage of his shop's role in "The Shape of Water," a printout of which sits on a sideboard in his showroom alongside a painted bowl, a vintage ash tray, a Calder-inspired sculpture and a painting showing two figures embracing against a landscape of smoke and fire.

"I kind of specialize in weird and quirky and unusual items, not just midcentury modern," Merisola said. "I like anything with good design, unusual, from turn of the century to the '90s."

The bulk of CooCooU27's business comes from out-of-town decorators working for clients of means, dealers who drive to his warehouse from Toronto, New York City or the Hudson Valley and local retail.

But now, thanks to the national spotlight Merisola's trained eye for vintage pieces achieved Sunday, those times are likely a thing of the past.