In most contemporary museums, taking out the trash is a simple and discreet endeavor.

But at the Albright-Knox Art Gallery, which is embarking on a $155 million expansion to add gallery space and renovate its aging buildings, it's a bit more complicated. When workers at the gallery's café need to get rid of waste or transport food, they must roll garbage totes through narrow corridors, carefully navigating around priceless pieces of sculpture and some of the most important paintings in the history of art.

When those totes arrive at the cramped loading dock on the west side of the gallery's 1962 building, they share space with piles of linen waiting to be washed, the exposed guts of dated mechanical systems and crated artworks waiting to be installed in the gallery or carried off on trucks.

"Ideally, in a contemporary art museum, trash and visitors don't mix," said Albright-Knox Deputy Director Joe Martin Lin-Hill, venting one of many frustrations gallery leaders have with the limitations of Gordon Bunshaft's 1962 building.

Those challenges, which go far deeper than the co-mingling of art and trash, are at the center of a controversy over a plan the gallery announced last year to convert Bunshaft's galleries and courtyard into a grand entry hall.

As gallery officials, preservationists and others debate the shape and form the expansion will take, a question lingers in the minds of gallery fans:

Aside from the cramped quarters and the obvious need for more space to show the gallery's collection, what's so bad about the Bunshaft?

From a distance, the Albright-Knox Art Gallery's campus at the edge of Delaware Park appears to be in perfect balance. 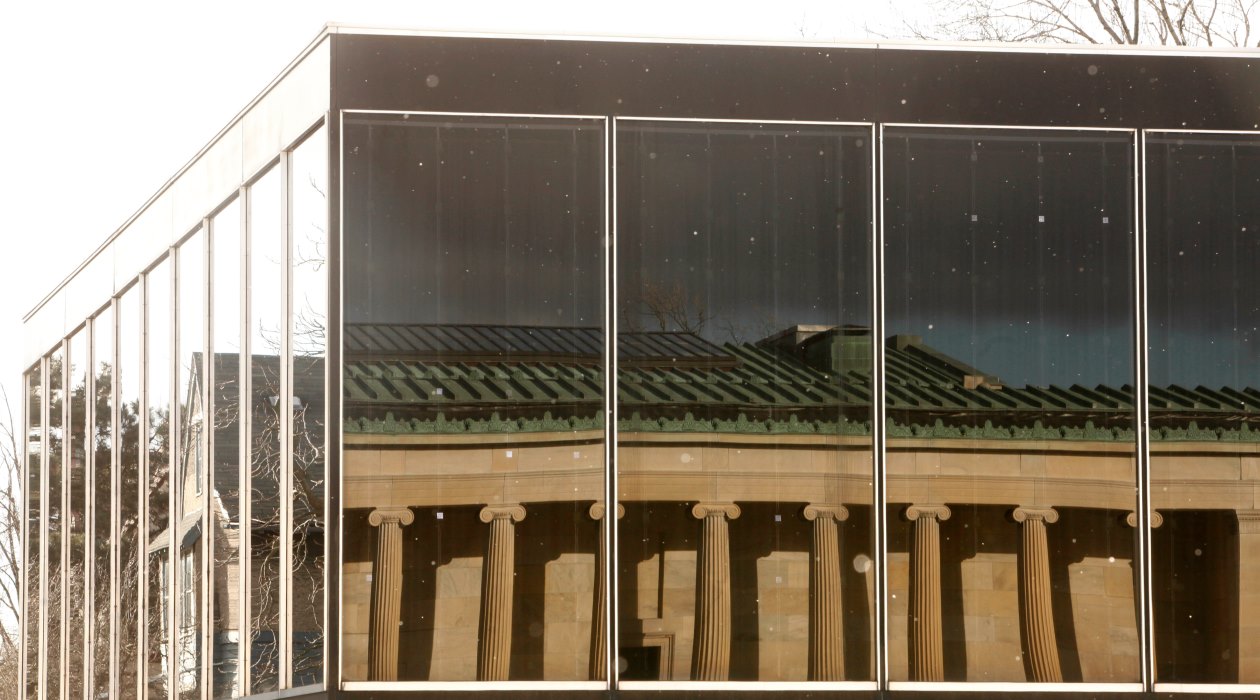 E.B. Green's 1905 building, a neoclassical marvel hailed for its airy galleries and exquisite symmetry, dissolves into the simple grace of Gordon Bunshaft's low-slung, modernist jewel-box to the south. The dark glass wall of Bunshaft's auditorium reflects the marble colonnade on the south side of Green's building, each architect addressing the other in the language of their time.

But look a little closer – into the cramped loading dock of the 1962 building, into its narrow corridors, walled-off courtyard and the artless walls of its bottlenecked entrance – and this image of visual perfection gives way to practical problems.

This contrast – between a desire to preserve the visual beauty of the gallery's campus and the need to add exhibition space and correct the shortcomings of its existing buildings – is at the heart of the debate over the expansion. 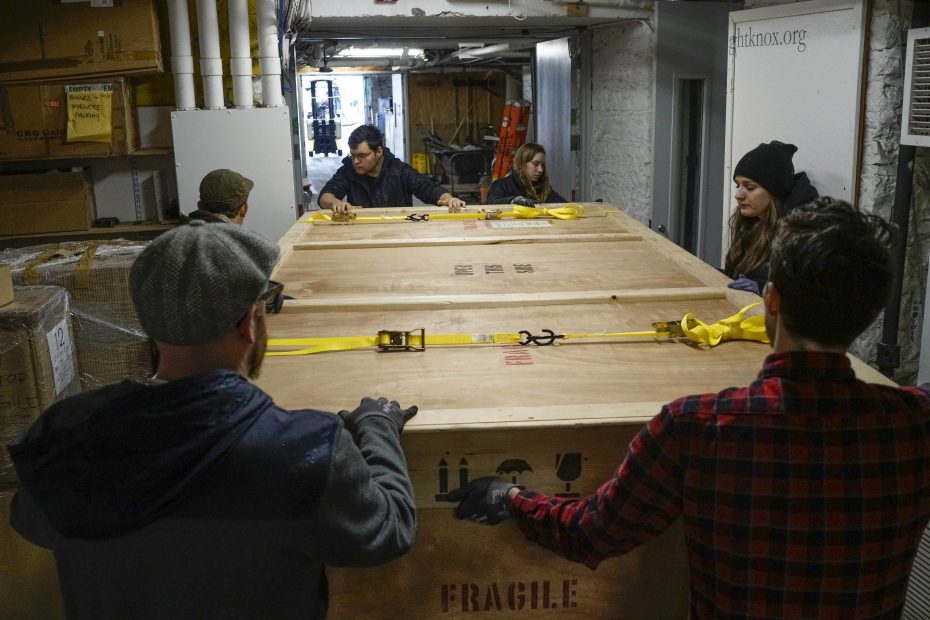 A team of art preparators moves artwork to a waiting truck for shipment in the cramped loading dock at the Albright-Knox Art Gallery. (Derek Gee/Buffalo News)

Last year, the architectural firm OMA released a concept that would have converted the building's cramped galleries into a grand entry hall and placed a large new exhibition space between Green's building and Bunshaft's auditorium. But many preservationists and architectural historians decried the approach as an insult to Bunshaft's building and his legacy.

After the controversy, the gallery hired two preservation firms to guide them through a possible alternative solution. That process is ongoing. Though the gallery announced in September it was exploring an alternative expansion on the north side of the campus, neither the gallery nor the firms would offer any comment on where the design is heading or when a revised concept would be released.

Will preservationists again change the course of Albright-Knox expansion?

On a recent afternoon, the Albright-Knox's Lin-Hill talked about the challenges of the building in the gallery's café as snow fell into the deserted courtyard outside the café's windows. 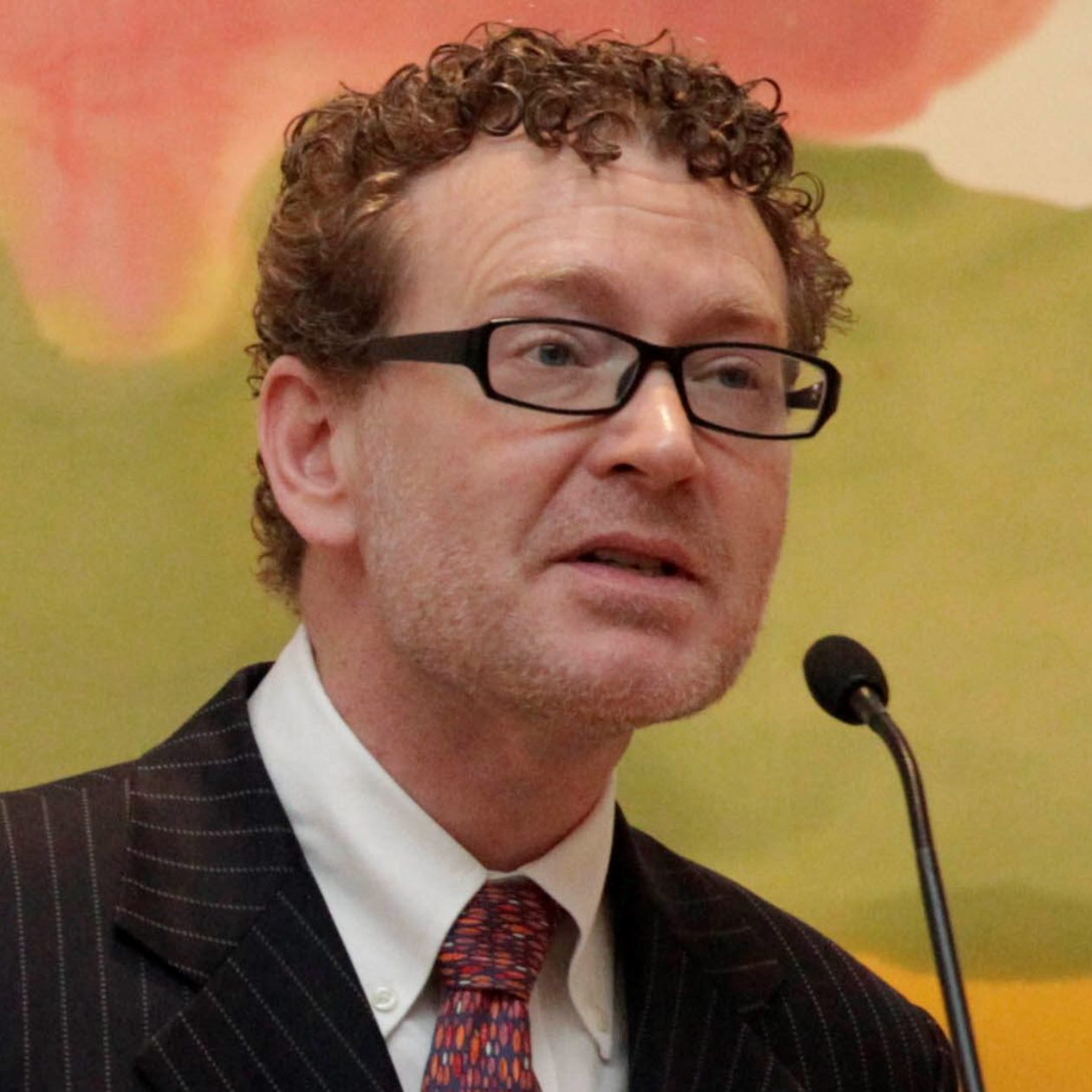 The Bunshaft building, Lin-Hill admitted, is an "exquisite sculpture" and a "beautiful, minimalist gesture."

While the beauty of Bunshaft's form is uncontested, it struggles to perform many functions required by 21st century museums.

Among the most serious issues:

The gallery's claustrophobic loading dock, on the west side of the Bunshaft building, is inadequate for large works of contemporary art and serves as the only point where the transport of waste materials and other building functions normally separated from art can take place.

As a result, large works of art – such as Jackson Pollock's famous painting "Convergence" – must be craned into the 1905 building's sculpture court and then carted to other parts of the building. This comes at enormous expense – in staff time, crane rental and insurance – in addition to the increased risk to works of art that often must be moved by hand through a series of narrow doorways and down vertiginous staircases.

Its understated entrance, facing Elmwood Avenue, creates a bottleneck during busy times, with nowhere for visitors to congregate except in the already cramped vestibule.

As a result, the building's climate control system is unable to maintain the proper temperature and humidity near the entrance, which means that, especially in cold months, precious wall space must remain empty or hung with works that can stand up to fluctuations in temperature.

There are also serious issues with low ceilings, fixed lighting that cannot easily be renovated, a multilevel floor that creates challenges for accessibility and the transport of art, and a circulation plan that requires food and trash to be transported through corridors hung with Picassos and Van Goghs.

Lin-Hill said the majority of incidents that endanger artworks, such as people bumping into paintings and sculptures, happen in the cramped corridors of the 1962 building rather than the comparatively spacious 1905 galleries.

But the courtyard, which Bunshaft designed as a contemplative space, is perhaps the most emblematic of the challenge the Albright-Knox faces at it tries to reinvent itself for a new generation of museum fans.

"It's this sacred internal space that is meant to be looked into, but maybe not ventured into," Lin-Hill said. "This is a lot of space right at the very, very heart of our campus. It needs to read as a space that belongs to the public."

'We operate in the public trust'

The secretive posture of the courtyard, the relatively unadaptable galleries that surround it and the cramped entryway that greets visitors, Lin-Hill and other gallery leaders believe, send a message that is at odds with the gallery's public mission.

"We operate in the public trust. The broad public, not the exclusive public," Lin-Hill said, citing the gallery's popular "Freedom Wall" public mural project on the East Side as an example of its expanding role in the community. "It would be great if this museum had that kind of participatory vitality at its very center in the future. … This is what the museum sector as a whole is doing because it wants to have a more vital role."

Since Bunshaft's addition opened in 1962, the art world has grown exponentially, diverging into a countless thematic streams and mediums, from monumental sculptures demanding monumental spaces to purely conceptual art requiring no space at all.

The unpredictability of the art world and its growth into countless new disciplines demands a different kind of museum than Bunshaft or his contemporaries could have conceived.

This uncertainty, coupled with a desire to reconnect with segments of the public long alienated from the art world, has driven expanding museums to favor vast public spaces and highly adaptable galleries over the more intimate spaces of the past.

Recent projects, from the Cleveland Museum of Art's $320 million expansion to the $50 million renovation of the Speed Museum in Louisville, Ky., have attempted to satisfy the public's desire for more welcoming civic spaces, museums' desire to earn revenue from those spaces and artists' demands for more flexible exhibition spaces.

OMA's original concept, which would have converted the lower part of Bunshaft's buildings into educational space while blowing out its courtyard and gallery into a large entry hall accessible from the east and west sides, was of a piece with these projects. 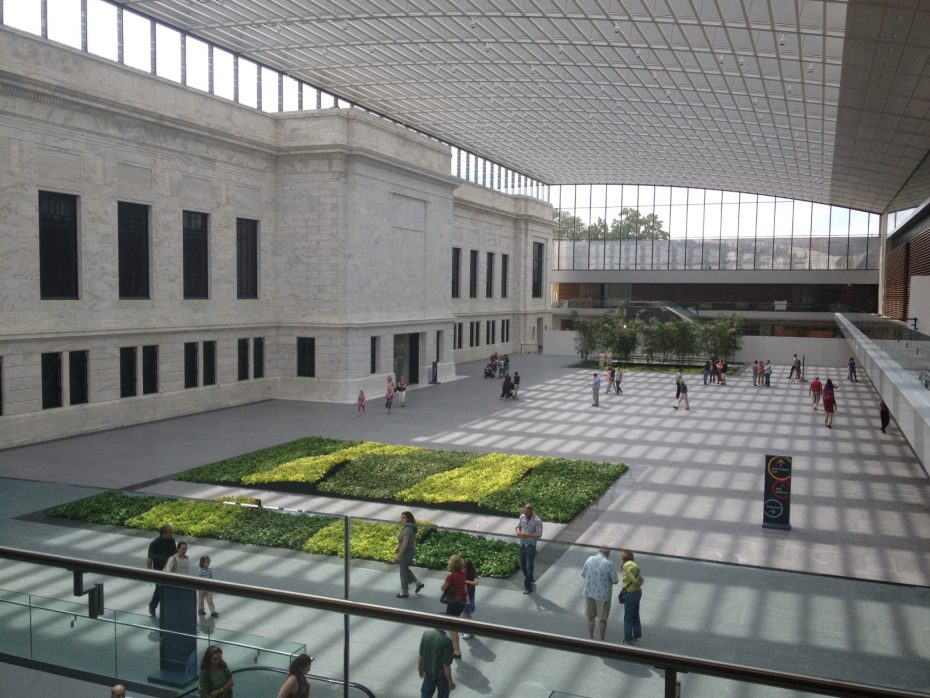 The Cleveland Museum of Art's renovation included a large, plaza-like public space between its original and new buildings.

'Change is a constant'

Louis Grachos, who served as director of the Albright-Knox from 2003 to 2013 and now heads the Contemporary Austin, made the most out of Bunshaft's building during his tenure. His "Remix the Collection" series constantly shuffled what was on the walls of the building, which had remained mostly static for decades before Grachos arrived.

Though he declined to critique the way it functions, Grachos acknowledged that it does not offer enough room for the gallery's growing collection.

"The 1962 Gordon Bunshaft building is an exquisite building, and it was a pleasure to have worked with it during my tenure," he said in an email. "The only downside to the Bunshaft building was that it did not provide enough physical space for the Albright-Knox’s outstanding collection."

Albright-Knox mega-donor Jeffrey Gundlach, who has criticized critics of OMA's original concept as "NYC elitists" on Twitter, did not respond to an email requesting a comment on the Bunshaft building's limitations.

John Massier, the longtime visual arts curator of Hallwalls Contemporary Arts Center and a frequent gallery visitor, hailed the intimate experience of being in the 1962 building, but said he was open to changes.

"I love that style of architecture, but I also understand that maybe that's not entirely useful to the future," Massier said. "But change is a constant, and even in our physical structures, change has to be acknowledged once in a while, has to be accommodated."

Others, like Buffalo-born architect Richard Gluckman, fall somewhere in the middle. 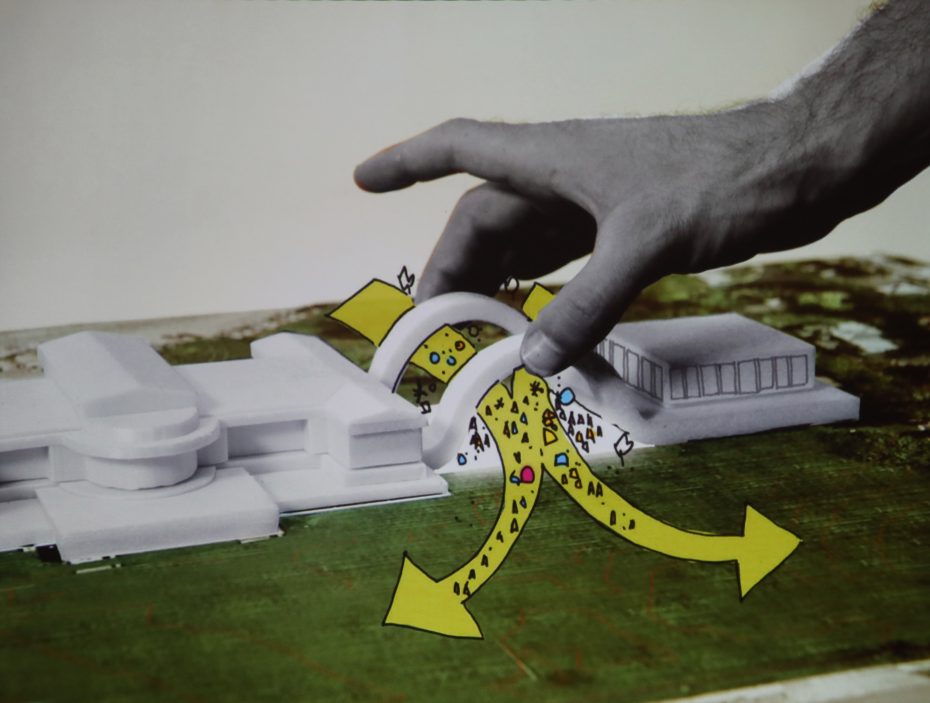 An illustration from architecture firm OMA demonstrates the drive behind its original concept to reconfigure Gordon Bunshaft's 1962 galleries into an airy entry hall while preserving his auditorium. (Sharon Cantillon/News file photo)

Gluckman, whose firm Gluckman Tang Architects submitted a proposal to expand the gallery to the east during Grachos' tenure, acknowledged problems with visitor circulation and art loading in Bunshaft's design. While he was opposed to OMA's first concept, he urged a solution that does not capitulate to the complaints of preservationists by building on the north side.

He compared that solution, which the gallery floated last fall, to "putting one of those prefabricated garden sheds in the backyard."

"If the administration and the architects have to take a bow to the preservationists, then they abrogate their responsibility to the institution, to the Albright-Knox, to the City of Buffalo and to the profession," Gluckman said. "There are ways to create a strong tripartite composition, just like it had to have been a challenge for Gordon Bunshaft to create that incredible binary composition."

Many advocates of OMA's original concept at the gallery and in the community contend the 1962 building is a rigid embodiment of a rigid era that will not yield to 21st century demands without radical changes.

For his fiercest advocates, Bunshaft's achievement is an inviolable product of its time whose functional shortcomings pale in comparison to its importance in the history of American architecture.

Right now, behind closed doors at the Albright-Knox and in the Manhattan offices of OMA, the demands of history and the needs of the future – of visual beauty and practical problems – are facing off. A compromise is likely to emerge in a matter of months.

Until then, Lin-Hill suggested, the gallery will continue to pursue its mission and push for a solution that satisfies everyone.

"The goal here is not to embalm the museum and its collection. It's to bring them to life," Lin-Hill said. "People want this building to be vital. To make this building vital, some of its challenges have to be mitigated."