At $375 million, the University at Buffalo's new Jacobs School of Medicine and Biomedical Sciences ranks as one of the most expensive buildings ever constructed in Western New York.

Designed by the New York-based firm HOK Architects – the company responsible for the ongoing $4.5 billion renovation of LaGuardia Airport – the Jacobs School occupies 628,000 square feet in the heart of the Buffalo Niagara Medical Campus. Unlike many publicly funded university buildings, it is closed to the public and designed to exclusively serve students and faculty.

So on Thursday morning, we brought you inside with us via Facebook Live, courtesy of HOK principal and project manager David Schwartz, who has spent the bulk of five years working on the project. Here's a video of the tour:

During the tour, Schwartz highlighted some of the building's most curious and progressive architectural features. Among them: 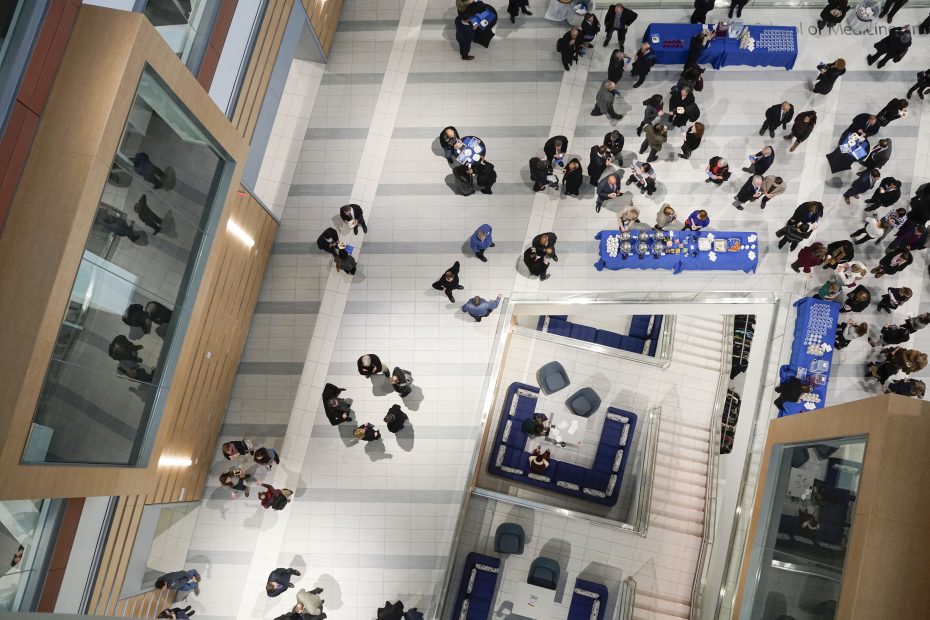 Lines of grey terrazzo tiles on the floor of the Jacobs School of Medicine and Biomedical Sciences match the exact trajectory of Allen Street, while the white tiles mimic the angle of Main Street. (Derek Gee/Buffalo News)

The grey and white terrazzo tile floors of the building's atrium – as well as its skylights and the gleaming white walkways that bridge its outsized atrium – are based on the trajectories of Allen Street and Main Street.

Those streets meet each other at a 70-degree angle, as do the intersecting grey and white lines of the floor, the cut-outs in the atrium and many other features of the building. This, Schwartz said, is a nod to Buffalo's much-praised radial street plan. It also creates lines of continuity from the surrounding streets through the building and serves as a subtle visual connection to the neighborhood. 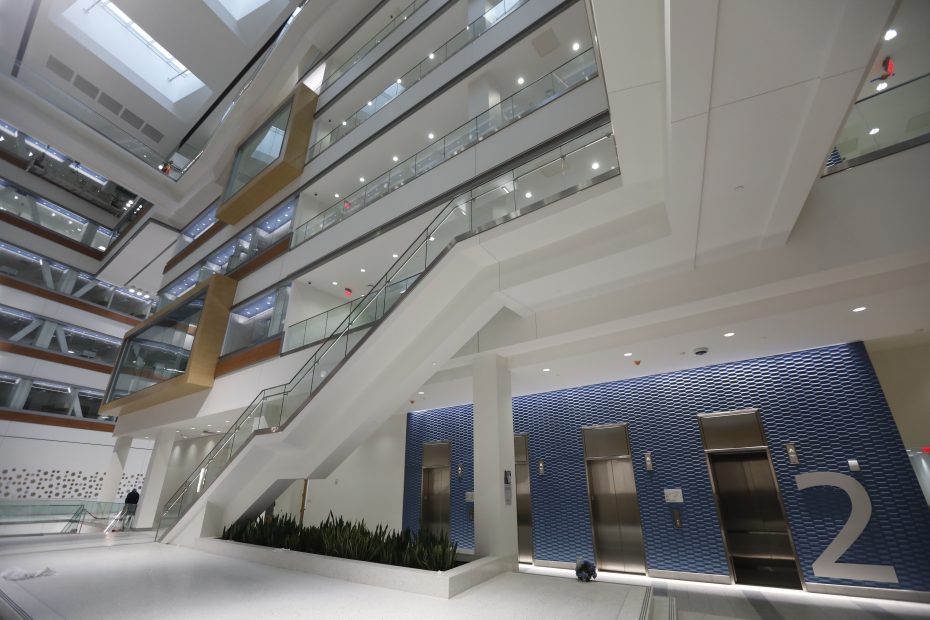 Stairways get prime real estate and Elevators take a secondary role in HOK's design for the Jacobs School of Medicine and Biomedical Sciences. (Derek Gee/Buffalo News)

Many buildings constructed in previous decades treat stairwells as necessary utilitarian evils, hidden away behind unattractive fire doors and usually made of cheap concrete. Elevators, by contrast, usually hold a place of honor. Here, following a longstanding trend in the opposite direction, HOK has de-emphasized the elevator shafts and brought the staircases into full view.

The result, Schwartz said, is that a visitor can clearly see a path from the ground floor to the top of the building seven floors higher and is thus encouraged to traverse the stairs rather than steer themselves as if by autopilot to the elevator banks. It's a strategy that makes plenty of sense in a building devoted to health and wellness.

Bracing for a breeze 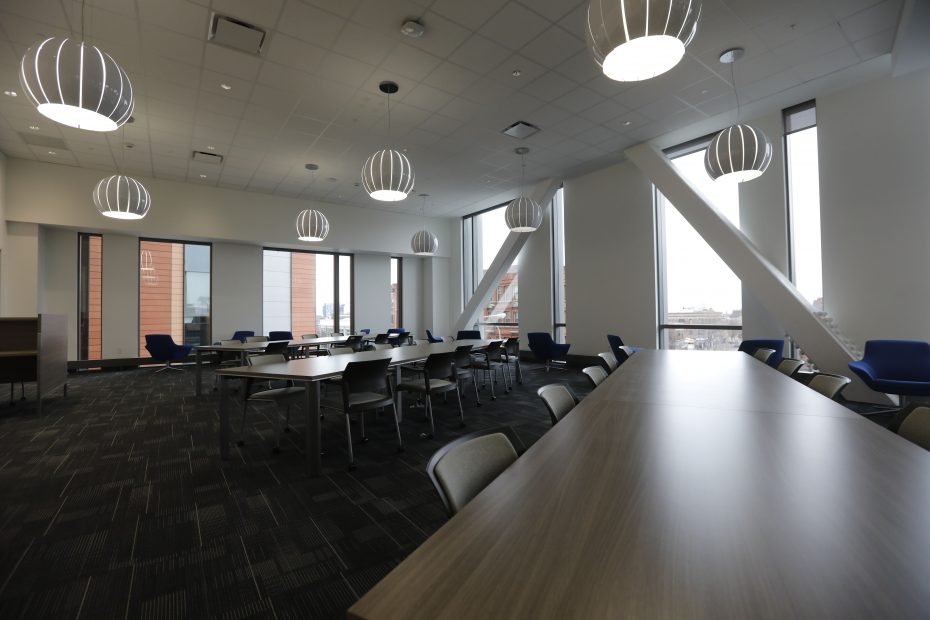 The angled structural bracing of the Jacobs School of Medicine and Biomedical Sciences is in view on both axes, making plain engineers' efforts to stabilize the building against high winds. (Derek Gee/Buffalo News)

The Jacobs School sits along High Street, which as the tallest point in Buffalo, is subject to high winds on a regular basis. As a result, the building had to be designed to withstand those winds and to prevent it from swaying too much under the pressure. The solution of HOK's architects was both to brace the building with angular steel beams that stabilize the structure on its north-south and east-west axes, and to put those beams on display.

The act of exposing the bracing rather than tucking it inside the structure gives the building a sense of visual stability as well as the concrete, physics-based kind. As you walk through the building, you see the angular white beams and get the sense that the building is solidly armored against physical forces constantly bearing down on it. 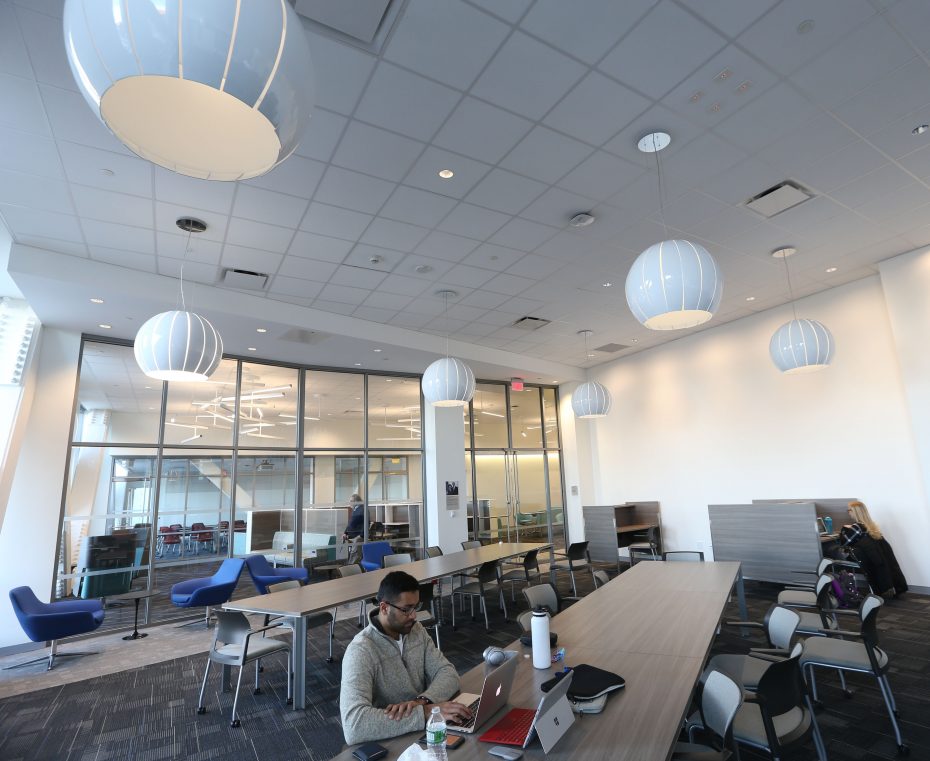 Second-year student Aman Cheema works in the reading room of the library at the new Jacobs School of Medicine and Biomedical Sciences. (Derek Gee/Buffalo News)

There is nary a copy of "Gray's Anatomy" in sight in the Jacobs School's airy, light-filled "library," which is so-named, Schwartz said, more for accreditation purposes than anything else. In practice, the space is yet another highly adaptable working space where individuals or groups can dig into their research or commiserate on projects. It comes complete with a serene, silent reading room with views out to Main Street. 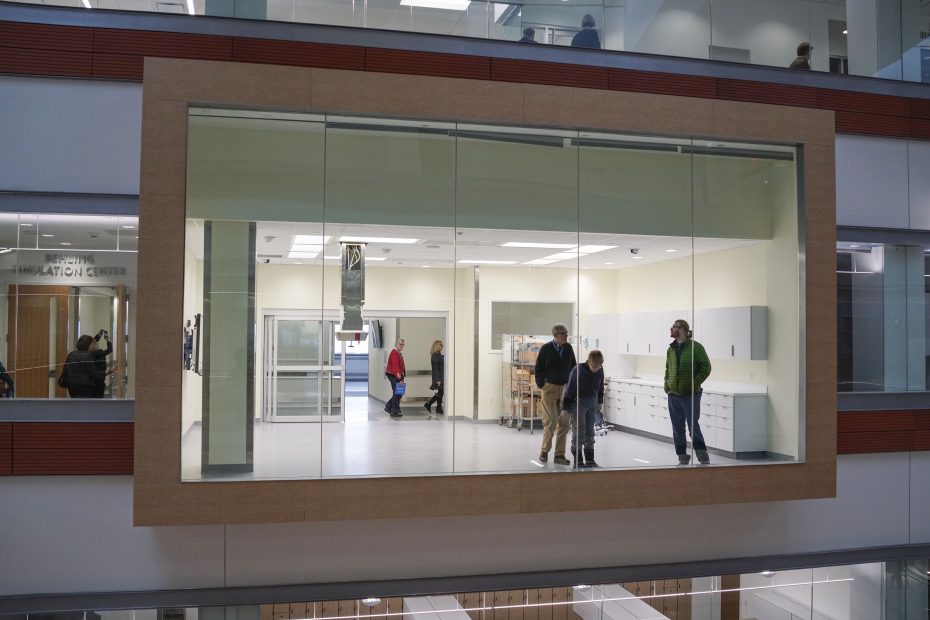 A floating operating room in the Jacobs School of Medicine and Biomedical Sciences is one of several open spaces that would be hidden away in more traditional designs.
(Derek Gee/Buffalo News)

One of the more controversial design decisions among faculty members was the inclusion of many work spaces, conference rooms, labs and other environments that put their occupants on full display. Nowhere is this more evident than when the shades are up on what Schwartz called "the operating room of the future," which looks out over the atrium – and, more importantly, allows people in the atrium to see in.

The same is true for a conference room where, during a recent tour, a professor and her students were hard at work on a project. Their scribblings and discussions, which would normally be contained behind closed doors, were transformed by the architecture into a kind of silent theater.

More on the Jacobs School of Medicine:

UB Medical School opens with aim to be 'catalyst for change'