University at Buffalo men's basketball cut down the Alumni Arena nets Tuesday night. On Saturday afternoon, it was the women's turn.

It was the final piece in an emotional postgame Senior Day presentation for the Bulls, who completed the regular season with an undefeated home record. Each of the five seniors -- Stephanie Reid, Cassie Oursler, Katherine Ups, Liisa Ups and Mariah Suchan -- gave speeches to the crowd of over 2,000. The video board displayed congratulations from the parents of the team's three Australian players, Reid and the Ups sisters, as well as a montage of the group's best moments.

"The five of us, we've been through so much together," said Oursler, a Grand Island graduate. "We're so close, and it's going to be great because we're going to be close forever."

The five women leave a strong legacy as the most successful senior class at UB since the program moved to the Division I level. The class already has 85 wins under its belt. 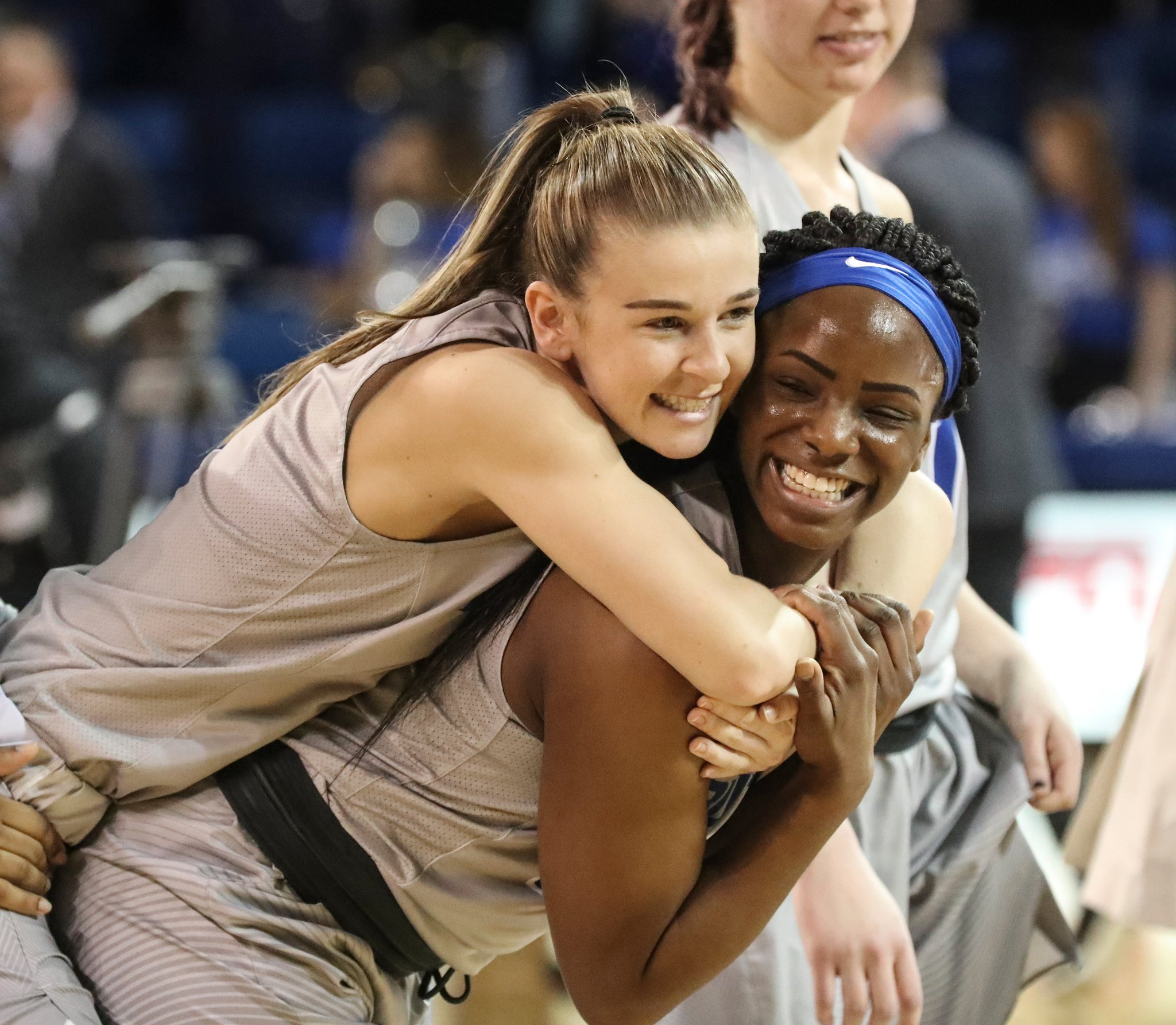 "It's not about the flowers," Legette-Jack said. "It's the steps that we've taken as a unit, as a family, to become something bigger than ourselves. By ourselves, we couldn't make this thing happen. We couldn't have a go-to player on this team. It had to be all of us."

Of course, the festivities would have been even sweeter if the Bulls had secured the top seed in the upcoming conference tournament. For a while, it looked like a serious possibility.

UB needed to win and for Central Michigan to lose to Toledo in a concurrent game to earn its first No. 1 seed in program history. The Rockets gave Central Michigan all it could handle, but the Chippewas pulled out a 72-67 victory.

"We controlled that," Oursler said. "We're the ones that lost to NIU. So, now we just control it in tournament play."

The Bulls are the two seed, earning a bye straight to Cleveland. UB will face the winner of seventh-seeded Toledo vs. 10th-seeded Kent State in the third game on Wednesday.

We will see you @TheQArena for all the #MACtion! pic.twitter.com/kTB5rLs65A

"We've done so much here and it's not over yet," Oursler said.

Reid called her shot in her postgame interview with the ESPN3 broadcast, promising viewers and fans in attendance that the Bulls will win the tournament.

"We better execute," Reid said with a laugh. "We don't really have a choice anymore."

UB won the conference tournament in 2016 but was eliminated by Toledo in the semifinals last season. Oursler said that ending is on players' minds as postseason begins.

"We're looking toward reclaiming and advancing," Oursler said. "We want to reclaim our title that we believe is ours. We're going there ready to kick some booty and give it our all."

While the ceremonies were filled with emotion, the Bulls were cool and collected in the dominant victory. Bowling Green hung around in the first quarter, trailing by only four after ten minutes. The Bulls pulled away from there, going on long runs to clinch a ninth straight victory. The defense was stingy, forcing 25 turnovers while holding a team under 40 points for the first time this season.

"We executed well defensively," Reid said. "I think we did a good job getting stops and steals."

Autumn Jones scored a team-leading 13 points, while Oursler had 12.

Legette-Jack said she expects UB, which finished the regular season with a 25-4 record, will be in the NCAA Tournament no matter what happens in Cleveland. The Bulls have made a serious case for an at-large bid, especially considering their top 20 RPI. The six-year UB head coach doesn't expect her players will lean on that insurance, though.