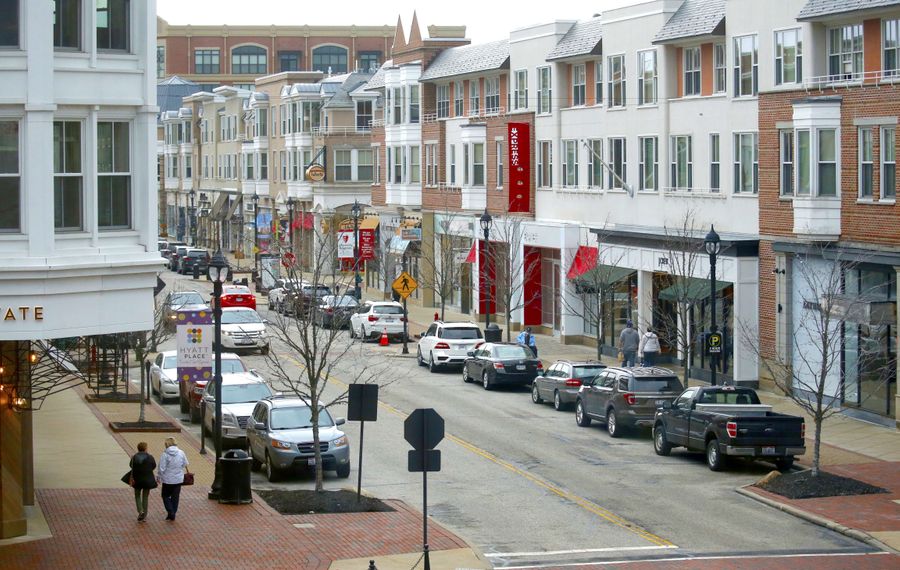 WESTLAKE, Ohio – Mountain Development Corp. is champing at the bit to bulldoze Eastern Hills Mall and redevelop the valuable land underneath it into a town center.

Brick-and-mortar stores have been battered by competition from Amazon, and malls like Eastern Hills have seen the worst of it. Now that consumers know the convenience of shopping online, slogging through cavernous mall corridors has lost its appeal. Retailers are scrambling to get shoppers off their phones and into stores, and one way they've been successful has been through the town center model.

Eastern Hills wants to build the shopping center of the future

The town center concept strategically groups retail, restaurants, entertainment, apartments, offices and green space to create a city within a town. When successful, it returns a higher profit per square foot than a traditional enclosed mall, organically building foot traffic and diversifying development beyond retail and into high-end residential and class-A office space.

Eastern Hills owner Mountain Development Corp. is in full pursuit of the town center model. It is in talks with Uniland Development Corp. about its possibly taking an investment stake in the property as part of a potential redevelopment, and has worked with the Town of Clarence on zoning changes that would make it possible.

But many people in Western New York still can't wrap their heads around the very concept: What is a town center, really?

It helps to look at Crocker Park – a thriving town center near Cleveland that Eastern Hills Mall officials have long held up as a model for the future of the Transit Road site.

The first step toward grasping what Crocker Park is, is to understand what it isn't.

Crocker Park feels like the Elmwood Village, if the Elmwood Village were designed by Walt Disney. There's an eclectic mix of architecture, lending the appearance that buildings filled its 12 city blocks organically over the decades, rather than springing up at once from 75 acres of vacant farmland in the early 2000s. There's none of the grit or anxiety associated with the real world. There's an impression that everything is predictable, safe and clean inside the Crocker Park bubble. It's an instant, self-contained village, optimized for the upper-middle-class pursuit of happiness.

Residents and visitors stroll the tree-lined streets pushing strollers or walking dogs on leashes. An empty nester stops to tie his shoe at a park bench. A college grad sips a drink at a sidewalk cafe on a break from his job at the Apple Store across the street. Office employees pop into the salon for a quick manicure or into the spa for a lunchtime massage. 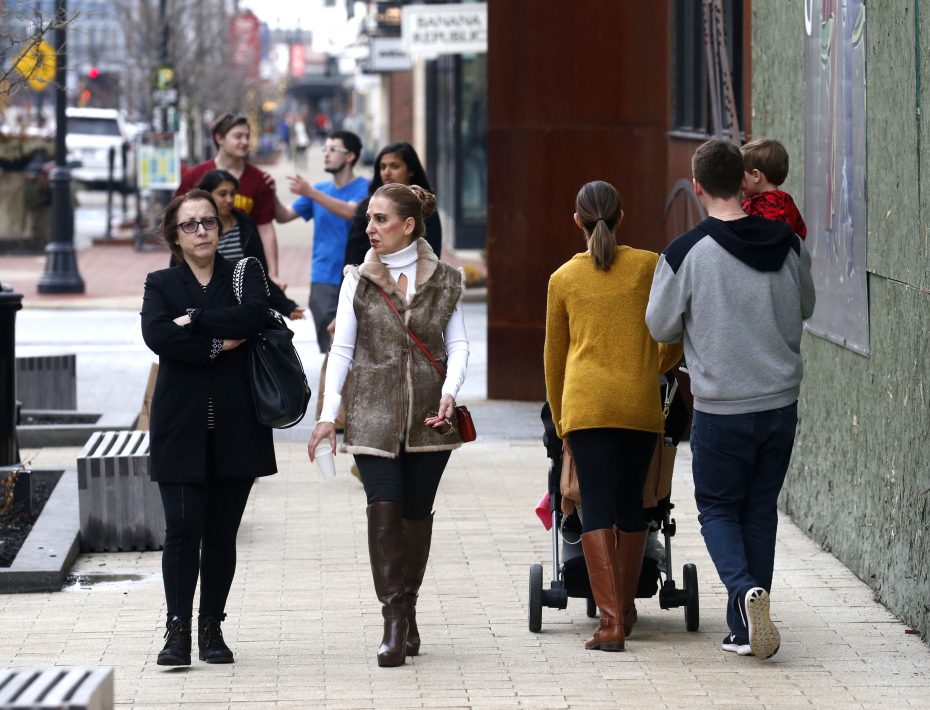 Walking the city-like streets in the middle of suburbia in Crocker Park near Cleveland. (Robert Kirkham/Buffalo News)

In the warmer months, the grassy West Park and East Park host concerts, outdoor movies and yoga, wine, art and music festivals. There are races, community events, even a splash park.

It's not a plaza with shoppers rushing from their cars to the stores. It's not a shopping center, it's a thoughtfully integrated living space.

But what about the weather? It's a common first objection when trying to fathom Eastern Hills' switch from an enclosed shopping mall. But that's what makes Crocker Park such a good comparison: Its weather is similar, with cold winters and snowfall topping 68 inches, but it doesn't keep people away.

Crocker Park was bustling on a rainy Tuesday afternoon last month. Teenagers Jared Meecha and Sara Chandler made the 20-minute drive to the center for lunch at the B-Spot, owned by Cleveland-native celebrity chef Michael Symon, a co-host of ABC's "The Chew."

"The weather doesn't matter," he said. "People love it up here."

The center is a winter destination during the holiday season, when it unveils a 50-foot Christmas tree and decks out the entire complex with lights and decorations.

"You would be surprised. It could be snowing and blistery cold and people will still come," said Tina Roberts, vice president of commercial operations at Stark Enterprises, which owns Crocker Park.

The parking setup helps. There are eight free parking garages tucked close behind the retail strips, and additional metered parking in front of stores, which allows shoppers to get in and out quickly. And town centers tend to attract first-in-market brands that draw outside shoppers from a wider radius, no matter the weather.

It also has a captive audience.

Crocker Park has more than 10,000 people on site before adding a single retail customer. It is home to 23 offices, including the world headquarters for greeting card company American Greetings, which employs 1,700. Added to that are the people who live in the center's 536 apartments and 129 town homes, and those who work in its more than 135 stores and restaurants.

That built-in density – and all of those residential and commercial leases – make the retail stores easier to support.

Aisha Patel moved to Crocker Park from New Jersey in January with her new husband.

"I'm new to Ohio and I don't know where anything is, so it's perfect," she said as she carried a bag of Trader Joe's groceries back home. "Everything is so close."

Her townhome tends to be the gathering spot for evening get-togethers with friends from the Cleveland area, unless they meet at one of the center's pubs or at its 16-screen Regal IMAX cinema for a movie. Other times, a girlfriend will come visit during the afternoon and they'll grab a smoothie together, go for a stroll or do some shopping.

The community has everything a resident needs – a two-story LA Fitness, spas, salons, two grocery stores, a farmers market on weekends. On the rare occasion Patel ventures outside Crocker Park, the interstate is less than a mile away.

Crocker Park, attracts singles, professionals, empty nesters, young families – people who want the buzz, the bustle, the convenience and charm of a hip, urban neighborhood, with the lower crime rates and better school district of the suburbs.

But the price of admission can get steep. Rents for Crocker Park's high-end apartments fluctuate, but they tend to start around $1,070 for a 596-square-foot studio and can exceed $3,000 for a 1,500-square foot three-bedroom.

The center also sweetens the deal. Residents get special perks, including discounts, admission to special events and, soon, concierge services. In May, they'll also get the LINC, a private social club for residents. It will have a gaming lounge, business center, party space, gym and a full kitchen, where residents can entertain or reps from Crocker Park's restaurants can hold cooking demonstrations for residents.