Is the start of March too early to begin celebrating St. Patrick’s Day? That depends.

Are you passionately connected to your Irish heritage? Were you raised to cherish Ireland’s culture, history and heartbreak? Do you read Samuel Beckett in the summer, spin The Chieftains in the fall and appreciate the enduring on-screen beauty of Maureen O’Hara all the days between?

If so, then no: it’s not too early. And in a city so reverential of its Irish lineage that it needs a three-day weekend and a pair of parades (not including the famed “World’s Shortest” around South Buffalo’s Talty’s Tavern) to properly pay homage, there’s no shortage of activities or events across the area to provide a festive lead-in to the official feast day.

In honor of St. Patrick’s March 17 date of distinction, here are 17 things to do before this year’s holiday.

Support the Gaelic games—with guesses. Ease into your St. Patrick’s season with a few pints amid the Celtic charm of the Irishman Pub while flexing your mental muscle throughout a Buffalo Gaelic Football-sponsored pub quiz.

Struggle through the Shamrock Run. It’s cold, windy, and always way longer than you or your weezing buddies think it is. But for 40 years, Buffalo’s 8K jaunt through the Old First Ward and surrounding points has signaled the official start to the Irish holiday season.

Serious and delusional runners can ramble as one, then limp off to the inviting bar stools of neighborhood favorites Adolf’s Old First Ward Tavern, the clandestine Cook’s or the shimmering emerald of Buffalo’s holiday options, Gene McCarthy’s.

Celebrate Irish folk music. Whether native Irish, Irish American or those green with envy, it’s necessary to remember the most vital part of the St. Patrick’s season isn’t the stout. It’s the music, thumping and reeling throughout March.

One of the bands that has perfected this stomp is South Buffalo’s Crikwater, who’ll join The Brothers Blue and Rochester’s Dady Brothers for a celebration of Irish and Appalachian folk inside Black Rock’s legendary Sportsmen’s Tavern.

Remember The Great Famine. Starting in 1845, Ireland was devastated by starvation that led to the deaths of more than one million Irish, and the emigration of an estimated two million. Those forced from their birthplace found new lives in places like Buffalo, and helped to build the city into what it is today.

The limestone and granite-laden Western New York Irish Famine Memorial—dedicated in 1997, and tucked off the Erie Basin Marina near Templeton Landing—honors their struggle and families lost, and should be a must-visit this time of year.

Info: Open for visitation at all hours off Marina Park South.

Pick a side in step-dance superiority. Hatfields-McCoys. Red Sox-Yankees. Ireland-England. Do these historic rivals compare to Buffalo’s battle for local step-dancing prominence between internationally renowned troupes Rince Na Tiarna and Clann Na Cara? Probably not, but one thing is certain: No matter your favorite, both organizations and their medal-festooned dancers shine throughout the holiday season, and are an indispensable accentuate at local celebrations all month.

Sing through a session. A Celtic session (or the Gaelic word “seisún”) involves acoustic musicians—armed with fiddles, guitars, flutes and a hand-held drum called a bodhran—cycling through traditional favorites in the corner of a pub.

In Buffalo, the most cherished session happens in the art-house confines of Allentown club Nietzsche’s (248 Allen St.). Sounds and songs echo under the eclectic locale’s ceiling graffiti and, surprisingly, provides patrons an unexpected authentic Irish experience.

Get some Celtic ink—for a good cause. How committed are you to your Irish ancestry? For those ready to answer that question with a needle and permanence, know that South Buffalo’s Grey Havens Tattoo is ready to help—and allow you to feel altruistic about your ink. The shop’s first Tattoo Fundraiser will donate proceeds from a day’s worth of Celtic skin art to the ongoing literary efforts of neighborhood beacon, Dog Ears Bookstore.

Devour a boiled dinner. Though corned beef and cabbage are available (and delicious) all year, those keen on this Irish-American dish seem to only develop a taste for the platter in March. Thankfully, many of the region’s favorite pubs—including South Buffalo’s Blackthorn (2134 Seneca St.), downtown’s D’Arcy McGee’s (257 Franklin St.) and Brennan’s Bowery (4401 Transit Road, Clarence), prominently feature servings of the entrée around your mandatory Lenten fish fry.

Enjoy a “Night" at the theater. Playwright surnames like Behan, O’Casey and Wilde crafted Irish work so timeless that it’s still interpreted by and inspiring theater troupes today. One these troupes is Irish Classical Theatre, which regularly produces the work of these and others sprung from Ireland’s rich artistic reservoir. Through March, they’ll take on the colorful Dubliners depicted in the Conor McPherson comedy, “The Night Alive.”

But in the absence of a proper monument to the man known simply as “Slats,” fans can now thankfully raise a glass to his fighter’s pose posted inside Elmwood’s newest Irish watering hole, Forty Thieves.

Dance with The Druids. Can you find a reason to patronize the Buffalo Irish Center every night between today and St. Patrick’s Day? Yes. Its schedule of events and entertainment is stacked, including a date with visiting County Kildare quartet, The Druids.

Dealing in rebel songs, heartfelt ballads and the pulsating percussion necessary for any holiday show, the Paddy Mangan-led outfit will make a fine warm-up for the holiday weekend.

Erin go shopping. St. Patrick’s Day is not Halloween. It doesn’t require you to don a Guinness top hat, dangling shot glass, or dress like an extra from Disney’s “Darby O’Gill and the Little People.”

But if you’re looking for an authentic Aran sweater for parade day(s), woolen cap or a Celtic-knotted gift for your significant other, there’s no place better than the import-laden Tara Gift Shoppe (250 Abbott Road), which is conveniently located across the street from the Irish Center. 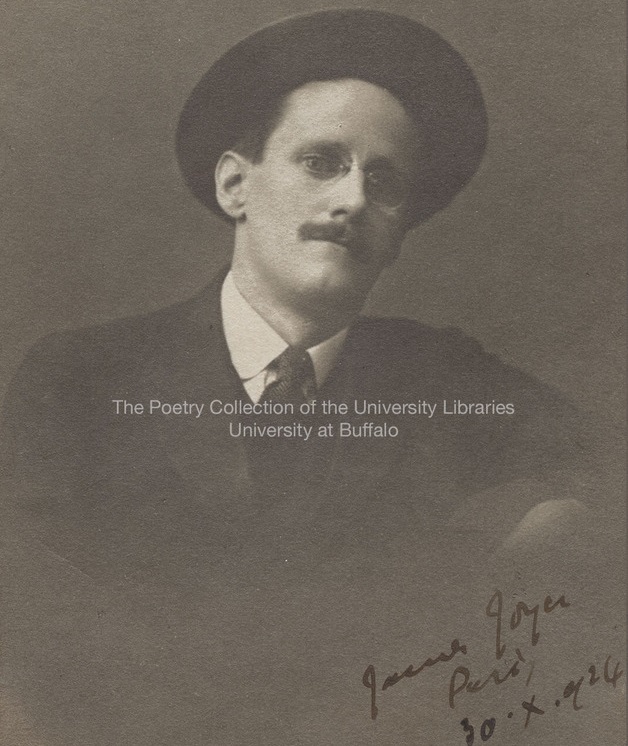 James Joyce's manuscripts are worth a peek. (via Poetry Collection from University at Buffalo)

Revisit the work of Joyce. The sprawling prose of “Ulysses” isn’t for everybody. But for those enthralled with the work of Dubliner James Joyce, a trip to the University at Buffalo’s Capen Hall is a necessity. The locale hosts an impressive collection of Joyce manuscripts, photos and notebooks—including the 66 needed to devise the author’s “Finnegan’s Wake.”

And after a nine-month closure for renovations, Capen’s Special Collections section has a tentative reopening date of March 9 inside The Poetry Collection (420 Capen Hall) at UB North. Once open, the collection is available 9 a.m. to 5 p.m. Monday to Friday.

Say a prayer for your ancestors—on your lunch break. Remember: St. Patrick’s Day is a holiday honoring a man known as the Apostle of Ireland. Amid the jigs and Jameson, it’s a spiritual affair that reminds those of Irish decent to remember ancestors responsible for their existence.

Luckily, those looking for solemnity near downtown offices will find no shortage of Catholic confines, whether inside St. Michael (651 Washington St.), St. Louis (780 Main St.) or St. Joseph Cathedral (50 Franklin St.) which was built on land secured by the Buffalo Diocese’s first bishop and revered friend to the Irish, John Timon.

Patronize your favorite suburban pub. For 11 months a year, neighborhood taverns clad with Irish monikers exist as multifaceted entities, as equipped to host a Bills game-day crowd as nightly allegiance to the auld sod.

But in March, locales like North Tonawanda’s Dwyer’s, Hamburg’s J.P. Fitzgerald's and Getzville’s Sean Patrick's Emerald Isle become go-to joints for those who want a festive pint or to masquerade as Irish, if only for an evening. Either way, ‘tis the season.

Limber up in Larkinville. Once the holiday is mere hours away, eager celebrants can flee cubicles for the annual Seneca Street-hosted hooley known as Live at O’Larkin.

Flank this with the locale’s usual fleet of food trucks and tap lines and you’ve got an ideal early start to the holiday weekend.

Pregame on Parade's Eve. Via a short trip from Larkin Square, partygoers can transition to the Buffalo Irish Center (245 Abbott Road) for an impressively expansive St. Patrick’s Eve program.

Entertainment includes a full-band tribute to The Cranberries and recently passed singer Dolores O'Riordan by Buffalo musicians Maria Sebastian and Zak Ward; Rince Na Tiarna on the dance floor, a swirling Irish session in the pub, and readings of chosen Irish prose by such local luminaries as WGRZ’s Pete Gallivan and Buffalo Sabres forward Ryan O’Reilly.

And if you’re not for sitting, Slow Roll Buffalo will be leading an eight-mile bike ride through South Buffalo, leaving from the Irish Center parking lot at 6:30 p.m.