The downtown Buffalo project at 500 Pearl includes an Aloft Hotel and a host of banquet spaces.

This winter's bitter temperatures and snow slowed progress by a couple of months on the nearly $70 million project, the Buffalo firm's largest-ever construction project. But work continues, with crews now on the upper levels. Ellicott is preparing to award the job of installing a decorative screen over the facade of the completed pre-cast concrete parking structure. Work is also beginning inside the former Buffalo Christian Center building.

The company has developed new renderings of the building's exterior while it finalizes other elements of the entire design, including for the inside of the Marriott-branded hotel chain.

"We're excited by it," Tom Fox, the firm's director of development, said during a presentation to the Buffalo Place Board of Directors Wednesday.

Ellicott purchased the former Christian Center property in September 2014. It is transforming the site bounded by West Tupper, Pearl and Franklin streets into a 374,000-square-foot complex, located between downtown and the Buffalo Niagara Medical Campus, next to the Theatre District. The site had also included the former Bachelor Building, a narrow four-story apartment structure, which was torn down in preparation for the construction.

The project features the renovation of the four-story Christian Center building – formerly the Fraternal Order of Eagles – plus 12 floors of new construction on adjacent vacant land totaling 307,000 square feet. The buildings will be seamlessly integrated.

The development will be anchored by the new hotel – Ellicott's flagship and its first in downtown Buffalo.

Aloft is one of the newer brands in the Marriott portfolio, aimed at a younger and more technologically-oriented clientele.

Aloft will include 110 guest rooms on the 10th through 12th floors, with "a good mix" of queen and king bedrooms, and a half-dozen suites, Fox said. The Christian Center space will be used largely for the hotel lobby, lounge and bar, professional meeting and banquet or event space, and a fitness center with a pool, sauna and locker rooms.

"It's a different target group, just a different feel to it, very high-tech, from the sundries area to the guest rooms," he said. "It's also a product you don't see currently in downtown Buffalo."

The company has eight hotels in the suburbs and two others in progress.

The project adds to the array of new hotels in the region, especially in downtown Buffalo. Ellicott Chairman Carl Paladino said "there's a lot more room" in an area like this.

"The most recent new hotels, they're doing OK," he said. "What they've done is encourage people ... to come downtown. For years, people would just stay out in the suburbs or the airport, and you're seeing a big change."

This will be one of the first Aloft hotels worldwide to use the brand's newest design, Fox said. That includes its high-tech ReFuel food area in the lobby, space for musical performances, interactive giant LED display panels hanging from the ceiling and special soft seating in the XYZ Bar lounge – so named because Aloft is the "sequel" to Marriott's "W" brand of hotels, Fox explained.

The first floor of the complex will be used for the lobby, a restaurant and additional retail space, totaling 11,000 square feet. The entrance on Pearl Street will feature a canopy gateway with Aloft's swoosh logo. The Christian Center's first-floor lobby also will be restored.

The next five floors will consist of structured parking, with 380 spaces, with about 110 spaces for hotel guests, 20 reserved spaces for residents, plus another 125 to 150 spaces for the offices and other hotel or restaurant activities. That still leaves at least 100 to 120 spaces for public use, Fox said. 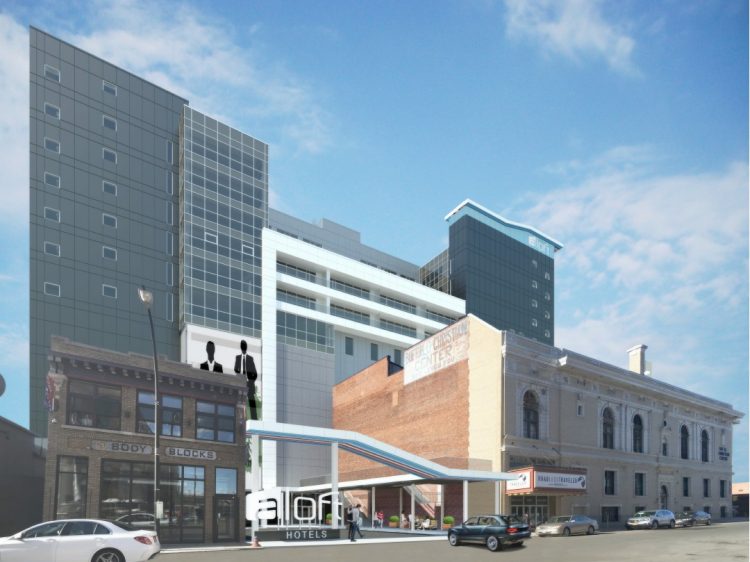 Rendering of Ellicott Development's 500 Pearl project, with the Buffalo Christian Center, as viewed from Pearl Street.

To dress up the pre-cast concrete parking ramp, which is completed, the facade will be covered over by a textured metal perforated screen, with articulated panels and blue-and-purple bands of light washing across at night in the Aloft brand colors.

Two floors of commercial office space will total 26,000 and 24,000 square feet, respectively, with terraces. Paladino said the company has already leased about half that space. He declined to identify the confirmed tenants.

Above the parking but below the hotel floors will be one level of 12 apartments on the 9th floor, with a mix of one-, two- and three-bedroom apartments ranging in size up to 1,800 to 2,000 square feet.

Fox said one of the most attractive features of the property will be large event and meeting spaces inside the Christian Center building. That's a key element that Ellicott has lacked in its portfolio, he said.

The main 6,000-square-foot banquet space – once the grand court for the Eagles and later used as a roller rink under the Christian Center – can seat more than 350 people. Additionally, events can also be held in a former billiard room of 1,000 square feet, where workers will strip away the drop-ceiling to reveal the original glass, as well as the former gymnasium that will be reconfigured.

Road Less Traveled Productions currently operates in the building's historic 13,000-square-foot Forbes Theatre, with its ornate architectural detailing. Ellicott may relocate it to the gym space to give it more room, while reusing the theater for special events, concerts or other performances.

"We're very happy with the 500 Pearl project, bringing all those different kinds of spaces into downtown," Paladino said. "When you look at the building, it doesn't look that big, but it has some nice spaces."

The developer also plans to reconstruct the basement pool, making it a little shallower at 5.5 feet and creating more room for seating, while adding locker rooms, a sauna, and a connection to the retail area, to be located in the building's former bowling alley, Fox said.