Expect some early March snow in Buffalo on Friday, but don't believe all the maps you see on social media just yet.

The National Weather Service today downplayed the North American Global Forecast System's model projecting a major snowstorm across upstate New York State and parts of New England as "an outlier" at this point. Forecasters said a storm system tracking through the Plains states into the Ohio Valley is forecast to be absorbed into a large East Coast storm system.

How all of that comes together will determine what weather the Buffalo Niagara region can expect on Friday.

"It's going to be the temperature," said Tony Ansuini, a meteorologist at the weather service.

Western New York can bet comfortably on significant precipitation. The type of precipitation will make all the difference, and forecasters went so far as to call the weather system "very untrustworthy." 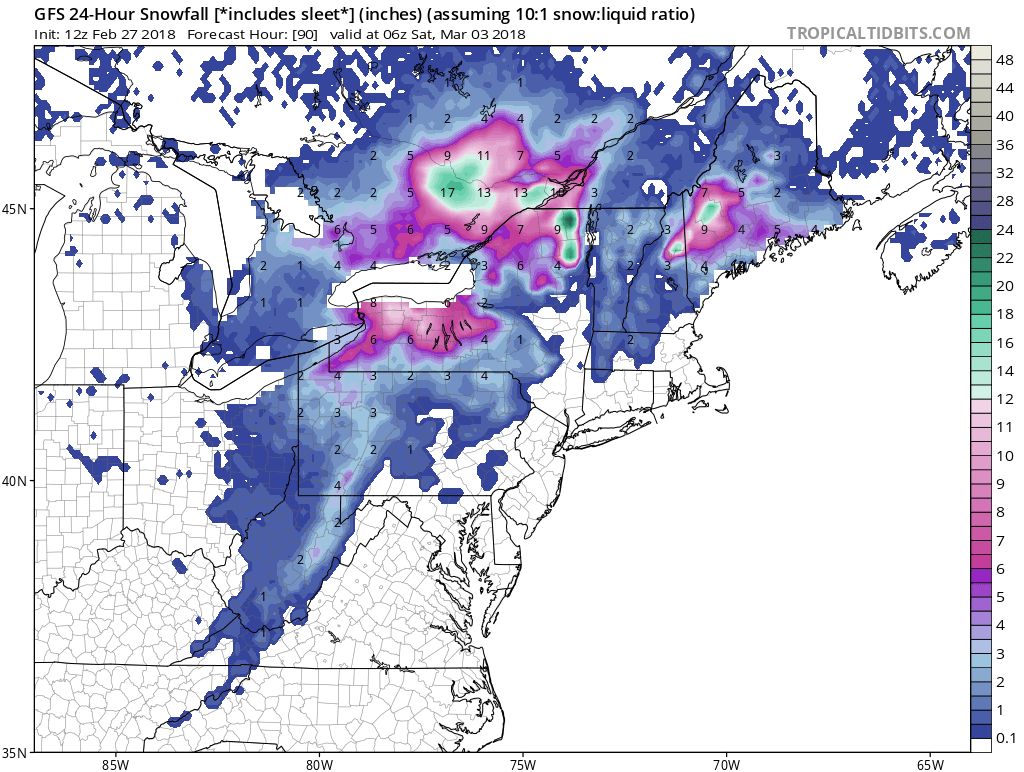 The Global Forecast System, a North American-based weather forecast model, suggests 8 inches of snow could fall by Friday night across Western New York. The National Weather Service, however, is taking a much more cautious approach to the impending storm system. (TropicalTidbits.com)

Looking closer at the details, forecasters said things are most uncertain about the track of a center of low pressure. That will appear to be the most determining factor, at this point.

If it takes a more southerly track, forecasters said that could mean more snow for the Buffalo Niagara region because it would pull colder air across the area sooner.

"So where does this leave us?" forecasters asked.

As of today, the weather service called for up to three-quarters of an inch of rain late Thursday with overnight lows near 32 degrees. Forecast projections show the transition from rain to snow is expected to happen after midnight, and continue throughout much of Friday.

The weather service calls for a 90 percent chance for snow on Friday.

Another question forecasters are still grappling with is "how much?"

"The range of possible outcomes remains quite large at this point with respect to snow amounts," forecasters wrote in their discussion this afternoon.

Ansuini said that, as of Tuesday afternoon, that it's generally looking like 2 to 5 inches across most parts of the Buffalo Niagara region with higher amounts expected in the higher elevations of Wyoming County and across the Southern Tier and lesser totals — like an inch or two — around metro Buffalo.

"It's still three days out, the models can change," Ansuini said.

Don Paul: Don't count winter out — at least, not before Friday