Resurgence Brewing Co., the popular West Side micro-beermaker that helped transform part of Niagara Street, will anchor the redeveloped Cooperage complex near Ohio Street along the Buffalo River.

Resurgence will occupy 25,000 square feet as the lead tenant for the $7 million project at 55-59 Chicago St., said Tom Fox, director of development or Ellicott Development Co.

The project planned for the old industrial site will also include an open-air beer garden, a distillery and a rock-climbing gym, as well as apartments.

It's a significant transformation for a facility that was constructed a century ago, initially to make the very kind of barrels that could have stored the beverages that will now be produced there.

The brewery will occupy all of the existing two-story Pattern Building, which is the only part of the historic three-building manufacturing complex that Ellicott plans to preserve. It also will take up an entire addition that is being proposed as part of the redevelopment project, to house Resurgence's brewing facility, canning operation, storage, an elevator and a loading dock.

Additionally, the interior courtyard of the current complex, which is surrounded by the three existing structures, will become an open-air beer garden for Resurgence, Fox said.

Fox said the new site would allow the brewery to expand significantly. "This facility is certainly a much larger space and upgrade for them," Fox said. "It's four times the size."

In a post on the Buffalo-Niagara Brewers Association blog, Resurgence officials said tentative plans call for a two-story taproom with food service in the Pattern building, plus banquet space for parties. Meanwhile, Resurgence's existing brewery and tap room operation at 1250 Niagara St. would become a research and development facility.

A separate small-volume distillery business will occupy about 7,000 square feet on the first floor of a second three-story building that Ellicott plans to construct. Fox declined to name it yet, but said it would be the first location for the company, which will produce "barrel-aged spirits" like whiskey and bourbon.

Fox also announced that Central Rock Gym will operate the rock-climbing gym planned for a 40-foot-high portion of a third building.

Founded by brothers Joe and Ed Hardy in Worcester, Mass., Central Rock offers indoor rock-walls and other fitness activities through its membership-based clubs, which also include yoga and weight-training equipment.

"They're a world-class operation," Fox said. "They were looking in the area for some time."

Fox said the Buffalo location will feature 300 linear feet of rock climbing surfaces, with a 45-foot tall main wall. "There's limited facilities for access to rock-climbing in Buffalo," he said. "With their operation, they target their product to a full range, from kids up."

The announcements, made during a public hearing before the Buffalo Planning Board, provided more clarity about Ellicott's plans for the Cooperage.

"It's been a good practice for us to have a mix of uses," Fox said. "It'll provide an exciting venue for people to both live and play."

Originally known as the E&B Holmes Machinery factory, the facility is a single rectangular building made up of three sections of varying sizes, built at different times and encircling an enclosed central courtyard.

It was historically used for making wood barrels and wood-working equipment and other specialty machinery. But the wood-framed buildings were abandoned and left to deteriorate after Holmes went out of business, and subsequent owners could not sustain them. Even now, Fox said, one of them is being supported by scaffolding on the inside, and outside evaluations concluded both are structurally unsound after years of exposure to the elements.

"It's really a shame what happened with the buildings in the last few years," Fox said. "It's just too bad we couldn’t have picked it up sooner." 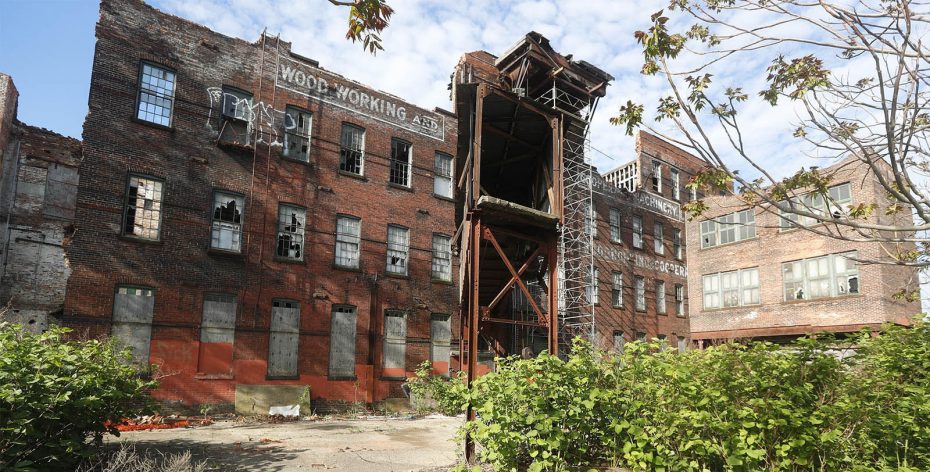 Ellicott bought the property from Clinton Brown early this month for $526,100, and plans to demolish two of the three structures that are beyond saving – the four-story Mill Building, dating to 1870, and the three-story Forge Building, dating to 1912. The developer already received approval from the Preservation Board last year and will start demolition in two weeks, Fox said.

Besides retaining Pattern for Resurgence, Ellicott will construct another 55,000 square feet of space to replace the buildings that will be torn down.

The three-story, 21,000-square-foot building with the distillery on the first floor will be constructed on the north end of the side, across the courtyard from Pattern. It will include 10 apartments on the upper two floors, with a mix of one- and two-bedroom units of about 1,000 to 1,200 square feet each. The building will stretch along Chicago Street to Mackinaw Street. Behind that will be the 40-foot tall rock-climbing gym.

The design by CJS Architects features a red-brick facade crafted to resemble the historic design, along with red flat metal panels wrapping the rest of the complex to blend in. "It's really a simple facade," Fox said.

Residents would get spaces in a gated parking lot in the back, but the rest of the parking would be off-site on land Ellicott owns on the other side of Mackinaw, Fox said.

The Board approved the project. "With the rock-climbing, it's really going to become more of a destination," said Planning Board member Martha Lamparelli.

Fox said construction would begin as soon as demolition is done. Officials hope to finish by the end of the summer or early fall.

"It was a long time coming to see this property restored," he said. "There's been past attempts, unfortunately failed, but the momentum that we're seeing along Ohio Street, on both sides of the river, it's a perfect time. We're starting to see the creation of a neighborhood in this area."