Some of the area's newest and planned recreation destinations are described as "slam dunks" and "home runs."

But they have nothing to do with basketball or baseball.

The Town of Tonawanda's 4-mile rails to trails path has been getting rave reviews from joggers, bicyclists and dog-walkers for nearly two years. The City of Tonawanda is trying to capitalize on its confluence of trails by enticing users to visit its downtown shops. Construction of an 8-mile trail along the western shore of Grand Island begins this spring. And the town and village of Hamburg are getting serious about a trail system that would connect the communities.

"In my opinion this is the best thing they've done in a long time in Tonawanda," said Andrew Lange, who interrupted his jog on the rails-to-trails path Saturday just long enough to answer a reporter's question. "This is free, so this is for me."

Municipalities nationally are still building and maintaining expensive complexes like ice rinks and aquatic centers, experts say. Participation in organized field sports and leagues is showing signs of decline, but it's still strong.

But the passive pursuits offered by trails and pathways are increasingly becoming a municipal priority, said Adam Bossi, a project consultant for Colorado-based GreenPlay, which advises towns on their recreational offerings.

"There's definitely a shift in people's focus to want to do these types of trail-based activities locally in addition to playing baseball, swimming or any of the other things towns, YMCAs or private organizations are providing," Bossi said.

Last week Bossi presented to Amherst officials the draft of a yearlong update to the town's recreation master plan, including the results of a survey of town residents.

"When it comes to trails, especially, we did see a strong desire across the board for better walking and biking experiences," he said. "Folks want to be able to get to different places without getting in the car."

The trail trend is real, and it's growing.

• New York State soon will close to vehicle traffic the West River Parkway in Grand Island. Construction beginning in April will turn the seasonal state road along the Niagara River into an 8-mile RiverView Connector Trail for bicyclists, joggers and walkers. The $2.5 million project is expected to be complete by late fall.

• In 2010, the 4-mile Heritage Trail opened in Lancaster, ending at the Alden town line.

• In the Southtowns, members of Erie Cattaraugus Rail Trail, an all-volunteer nonprofit trail sponsor, said they're close to acquiring control of the discontinued 27.6-mile Buffalo & Pittsburgh Railroad right of way. The trail would stretch from Orchard Park south through Springville to the Town of Ashford in Cattaraugus County.

• And in Tonawanda, the rails-to-trails path along an old railbed opened to acclaim in 2016.

"I can't believe how many people use it," said Jeffrey Ehlers, the town's youth, parks and recreation department director. "They love it. I've heard nothing but compliments about it."

Residents have taken a proprietary attitude toward the trail. On Saturday, two sisters were out picking up litter. An annual Earth Day cleanup is scheduled for April 21.

"It's kind of like the kickoff to the season," said Ehlers, whose department took over maintenance of the trail from Erie County, including cutting grass and picking up trash.

Native wildflowers have been planted in certain areas along the seasonal trail, and all but three benches are sponsored, with bronze plates, he added.

"When the weather turns nice, it's just hoppin'," Ehlers said.

In fact, the town is enhancing the trail's connectivity by adding a loop trail around adjacent Lincoln Park. The loop is about 75 percent complete, and it uses "green infrastructure" such as subsurface infiltration beds to prevent ponding of storm water on fields.

Sometime this year, the northern terminus of the rails-to-trails path at State Street in the City of Tonawanda will be extended north to connect with the Canalway Trail.

Also, the city in August opened its Blue and Greenways Intermodal Hub, a rest stop and plaza for bicyclists and hikers using its trails and pathways. The $1.14 million facility is designed to evoke a turn-of-the-century carriage house with concrete sidewalks that resemble a bicycle wheel from above.

To Mayor Rick Davis, there's an opportunity to create an economic impact from the presence of four trails within a quarter-mile.

"We really wanted to capitalize on the frequency that those bike trails get used to provide people with a place to stop and rest and hopefully frequent some of the businesses in our downtown area," Davis said. 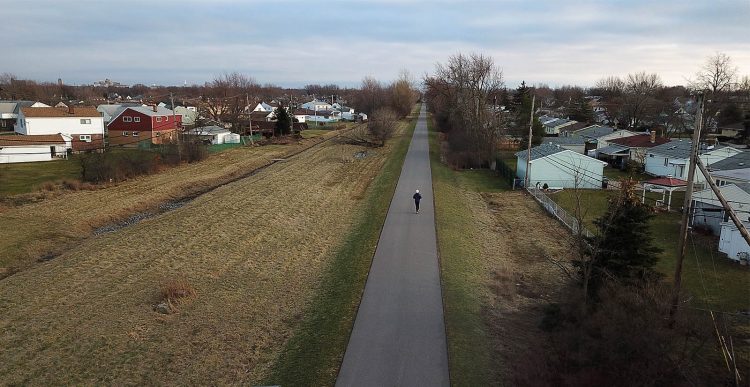 An aerial shot of the he Town of Tonawanda's 4-mile rails to trails path, which has been getting rave reviews from joggers, bicyclists and dog-walkers for nearly two years. (John Hickey/News file photo)

A 2014 American Planning Association study found that two-thirds of millennials and baby boomers agree that improving walkability in a community is directly related to strengthening the local economy. In fact, trails are popular across generations. A "cultural shift" is driving interest in trail-based activities such as walking, jogging and cycling, Bossi said.

The Amherst report cites the American Planning Association study, which found that 46 percent of millennials and baby boomers place a high priority on having sidewalks, hiking trails, bike paths and fitness choices in their community.

"We see a lot of baby boomers maintaining a more active lifestyle than maybe their grandparents did at that age," Bossi said.

In an earlier era, municipal recreation meant building things for residents and then passing on the cost, either through user fees or taxes to maintain them. The region is still rife with public golf courses, tennis courts, playgrounds and pools. But tightening budgets combined with declining usage has led towns to think twice about building big ticket items.

The Hamburg Town Board in late November terminated a contract with the Toronto firm that was planning to build a $30 million public-private sports facility in the town. The contract, approved in July 2016, became controversial when details about where it would be built and how much it might cost  were not immediately disclosed.

The Town of Tonawanda is looking at replacing its aging Brighton ice arena – one of two in the town — but that has proven to be a tougher sell than the rails-to-trails project.

"Certainly there is that sticker shock that goes along with it," Bossi said. "A lot of these types of facilities are in the tens of millions of dollars to start constructing. Then it's a substantial commitment to staff, operate and maintain it. That said, communities that really want to do this will do it."

The Town of Tonawanda is also home to an aquatic and fitness center – considered one of the jewels in its recreation system. It was built in 1991 for $3.8 million, or $7 million in today's dollars, on the spot where an outdoor pool once stood. By contrast, the entire four miles of Tonawanda Rails to Trails cost $3.5 million and was funded mostly with federal and state grants.

The center faces challenges, including competition from national chains of fitness clubs and state-mandated increases to the minimum wage paid to the center's 130 part-timers, Ehlers said. The increases have driven the center's personnel costs to $950,000 of its total operating budget of $1.27 million.

Could the town build the aquatic center today?

"It's a different time," he said. "When we made the aquatic and fitness center, the economy was totally different than it is today." 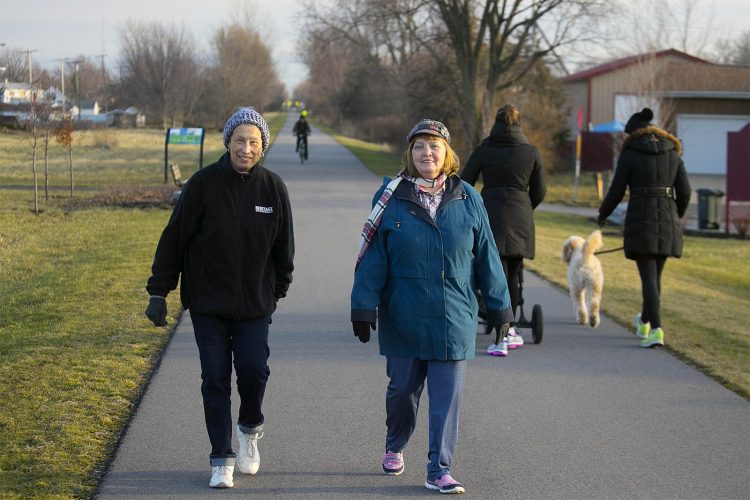 Joan Staples, left, of Tonawanda, and her friend Kathy Coe of Williamsville, walk on the rails to trails bike path in Town of Tonawanda on Saturday. (John Hickey/Buffalo News)

Trails don't bring in revenue, but there's a demand for them from residents.

Creation of an interconnected system of pedestrian and bicycle trails and paths was identified as a priority in the Amherst report.

The Amherst study found that the town has limited connectivity of neighborhoods to parks, and parks to parks, via trails. "The existing system of multi-use paths, sidewalks, and trails has potential to be expanded to provide better pedestrian and bicycle connections within the town," the report found.

Erie County is also in the midst of an update to its parks master plan, and in both the town and county studies trails and pathways rose to the top as the most important amenity in the region.

Towns are changing their recreation game plans in response, Bossi said, while trying to offer something for everyone.

"One of the challenges for towns, especially one as large as Amherst, is there's a huge diversity of people and everyone wants to do something different," he said. "Being a public provider of recreation services, you're really trying to cater to a huge segment of people with a variety of interests."