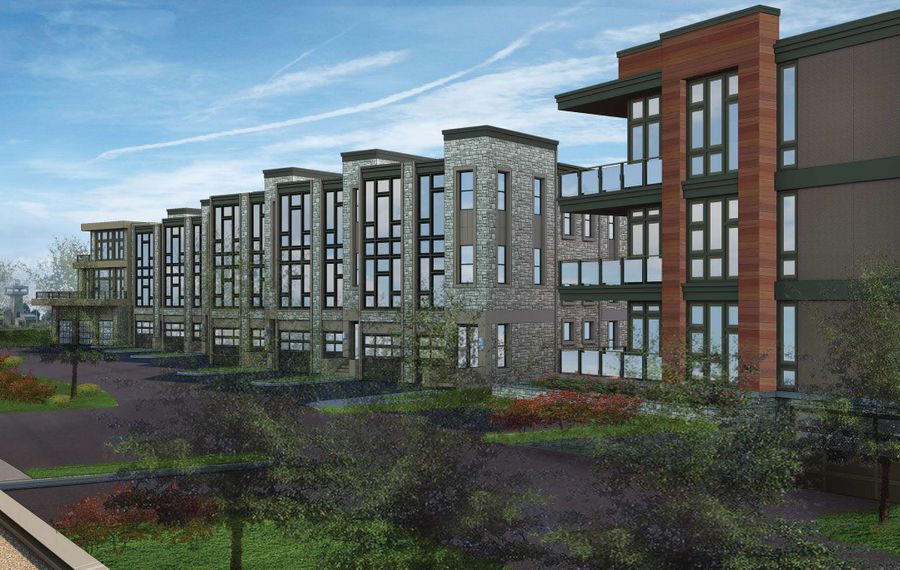 Ciminelli Real Estate Corp. squared off Monday against a well-organized neighborhood opposition from Waterfront Village – as the developer sought its first city approval for a proposed new West End condominium and townhome project.

Nearly three dozen people turned out for the public hearing before the Buffalo Planning Board at City Hall, mobilized for battle against a plan many saw as damaging to their way of life, their neighborhood and especially their waterfront views.

The project was tabled for at least two weeks.

The development firm, owned by Paul Ciminelli, wants to construct 31 for-sale residences on an L-shaped plot that is one of the last remaining greenspace parcels within the waterfront community.

Plans by architects at Carmina Wood Morris PC would include seven townhouses set back from the road and four separate condo buildings along Lakefront and Ojibwa Circle, with six units in each.

Ciminelli officials say the plan complies fully with the Green Code, with no variances required.

"We're there. We've made the submission. We're asking for your approval," architect Steven Carmina said. "This is where the road ends and the new road begins."

The surrounding community already includes 11 other developments dating back nearly 40 years, in some cases, with about 360 units and more than 700 residents in all.

The site has long been identified for future development.

Even so, neighbors object strenuously to Ciminelli's proposals and turned out to voice their positions.

Instead of the typical scattered comments among a host of speakers in no particular order, the Waterfront Village Advisory Council organized a coordinated response: a series of six speakers each assigned to focus on a specific point the group wanted to convey, and a seventh – Mark A. Flint from Breakwaters – to summarize.

Aside from the developer, no one else spoke.

One speaker hammered at the project's impact on life quality issues, citing increased traffic, parking and stress on city resources like water and sewer capacity or police presence.

Three more opposing speakers hit on other key issues: that, in their view, the condo buildings are much too high for the neighborhood at 44 feet, even though Ciminelli said they're three stories; that the project is not far enough back from the water and the road, at 100 feet and 30 feet, respectively; and that, to opponents, there are too many units concentrated in such a small area compared to other nearby developments.

A fifth opposing speaker touched on landscaping, and the need to avoid planting shade trees or high grass above two feet that could block the water views even for pedestrians and bicyclists.

The sixth speaker tried to criticize the environmental declaration that found no significant adverse impact.

The two sides even provided dueling data -- comparing the heights, setbacks and density for other neighboring developments, and argued over which ones were most applicable for comparisons.

Ciminelli sought to use the entire Waterfront Village, including Admirals Walk and Rivermist. Opponents sought to focus comparisons on the low-scale Marina Park and Portside.

"Both the city and the developer refer to this as the final piece of the puzzle," said Randy Bergman, of the Portside development. "We say that the puzzle piece they're presenting us just does not fit. It is too big and will overwhelm the surrounding communities… We just want a plan that protects those of us who are already here."

Planning Board member Martha Lamparelli called it "probably one of the most organized, well-put together" responses she has seen.

"You touched on everything," she said, complimenting the group.

Opponents raised enough questions that the Planning Board felt it needed more time to digest the information before making a decision, so the project was tabled for another meeting.

But not before some members voiced their own reservations, requested more information from the developer and even asked Ciminelli to consider reducing the project scale further by replacing one of the four condo buildings with three townhouses.

"We are not against development, but what we are requesting is that that development be consistent with the rest of the community," said Flint, who had recommended removing one condo building and one townhouse to bring the total down to 25 units.

Ciminelli was named designated developer of the 2.43-acre parcel by the Buffalo Urban Renewal Agency in January 2015, and company representatives repeatedly noted that the agreed-upon purchase price for the site has not changed since then. As a result, they said, they must achieve at least a certain density on the project in order for it to make sense financially.

"We've made significant changes," said Amber Holycross. "We can't give everybody everything, so we feel this was a strong compromise."

But they agreed to come back with the requested information and to explore the proposed changes.

"Hopefully, the developer will meet with us to refine some of our concerns," Kim Fiedler, a Marina Park resident, said after the meeting.