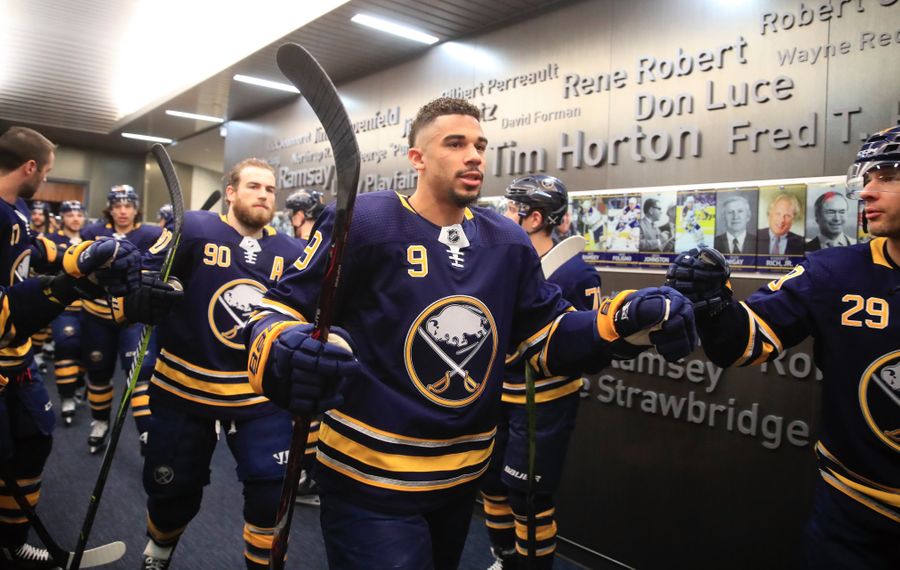 Evander Kane wished things worked out in Buffalo, but he got his wish Monday: A trade to a contender with a legitimate chance to make a run in the Stanley Cup playoffs.

"For me, this is a great opportunity. Excitement probably doesn't do it enough justice to how I feel," Kane said on a media conference call after being traded to the San Jose Sharks. "I'm looking forward to have the opportunity to possibly play in the playoffs and add what I can to that group and hopefully go on a long run."

Kane said he's familiar with several of the Sharks, as he played with Brent Burns at the World Championships and Joe Pavelski in the KHL during the 2012 NHL lockout.

"They've been a team that has had a lot of success, not just the last couple years but dating back 5-10 years," Kane said. "They were in the Cup final a couple years ago (losing in six games to Pittsburgh in 2016) and they have some great players like Logan Couture, guys like Pavelski and Burns. I'm hoping to add to what they already have."

Kane was in scramble mode packing his belongings to get to the West Coast as the Sharks' next game is Tuesday night at home against Edmonton. The Sharks won both meetings against the Sabres this season, with each game played in October, and San Jose has no road games the rest of the season against anyone in the Eastern Conference. So Kane is long gone after a shade over 2 1/2 seasons with the Sabres.

"I really enjoyed my time here in Buffalo," Kane said. "On the ice we didn't have the success as a team we envisioned and all wanted to and that was the hardest part. But I was able to create a lot of good friendships outside and inside the organization and those were friendships I'll always have moving forward here. I have great memories of the community work I was able to do and it was great playing in front of the fans in Buffalo."

Sharks GM Doug Wilson said his team did plenty of due diligence on Kane's checkered past, both on and off the ice. He said he even consulted the team's veterans for their thoughts on the deal.

"He's played with several of our players and I did include several of our veterans in this process," Wilson said. "We have a tremendous leadership group. ... Our guys were well aware of this. I also think Evander would admit he's grown up and matured. He's 26 and a man. He wants to be a dominant player in this league. I don't know about you guys but I know we're not all perfect angels when we're 20 or 21.

"We want to bring in professionals, people that can help us win and also do the right things ... We feel comfortable bringing him into this team, this dressing room and this city."

Kane said he doesn't feel he has a reputation he has to live down with his fourth NHL team.

"I don't know if misunderstood is the right word," he said. "It's something that creates headlines for people, the things that happened. We're not talking about last year or last month. I've grown up a lot since then. I think I've shown that the last 2-3 years. It's put behind me. If you ask any of my teammates in Buffalo, they would have good things to say. For me it's not a concern."

Sabres' Botterill: 'The group that we have is not working'