Since we are getting the mild finish to February I wrote about earlier in the month, it can be psychologically tempting to write winter off and assume we’re cruising into an early start to spring.

I’m not suggesting we are going to backslide into midwinter cold. I am suggesting March can be a cruel month for those pining for extended periods of balmy weather, especially when you’ve already had a good taste of it in February.

During this past weekend, I had a somewhat wintrier forecast for Friday, with some mixed precipitation and even some slush on the hills in my Channel 7 forecasts. That trend has actually grown stronger in Monday computer guidance. There is potential for a deep coastal storm to develop late this week close to New England, with a trailing “tendril” that could extend back our way in Western New York.

Rest assured, snow haters: You may be in the majority, but there are snow lovers out there too, including skiers and snowmobilers, who have seen their seasons disrupted. For snowmobilers, the disruption may be final for this season. For skiers, things aren’t looking good early this week, but the book on skiing is not closed.

I could engage in the poor science practice of cherry-picking some models, a couple of which have some heftier snow reaching us by Friday and Friday night. In meteorology, cherry-picking is usually a byproduct of “wishcasting.”

Social media, especially Facebook, is filled with wishcasters, mainly amateurs who are adept at downloading models available to the public. An American model, called the GFS, goes out 384 hours/16 days in time. If the GFS shows a whopper coastal low near the Virginia Capes on day 15, you can always count on wishcasters posting amateur doomsday forecasts that no schooled or experienced meteorologist would take seriously. Models can often forecast temperature trends out to that time range and beyond, but precipitation events are an entirely different matter.

However, since my weekend work shift, the GFS has upped the ante for measurable snow at week’s end. That’s five days out, not 16. Here is GFS total accumulated snow in inches by the end of Saturday: 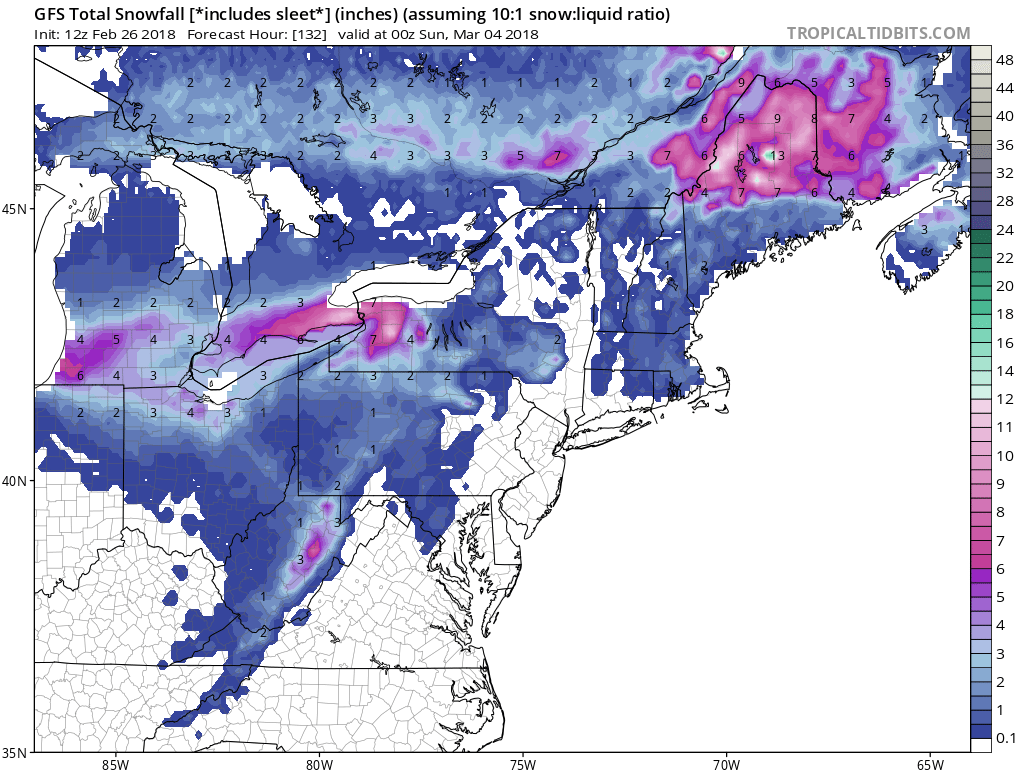 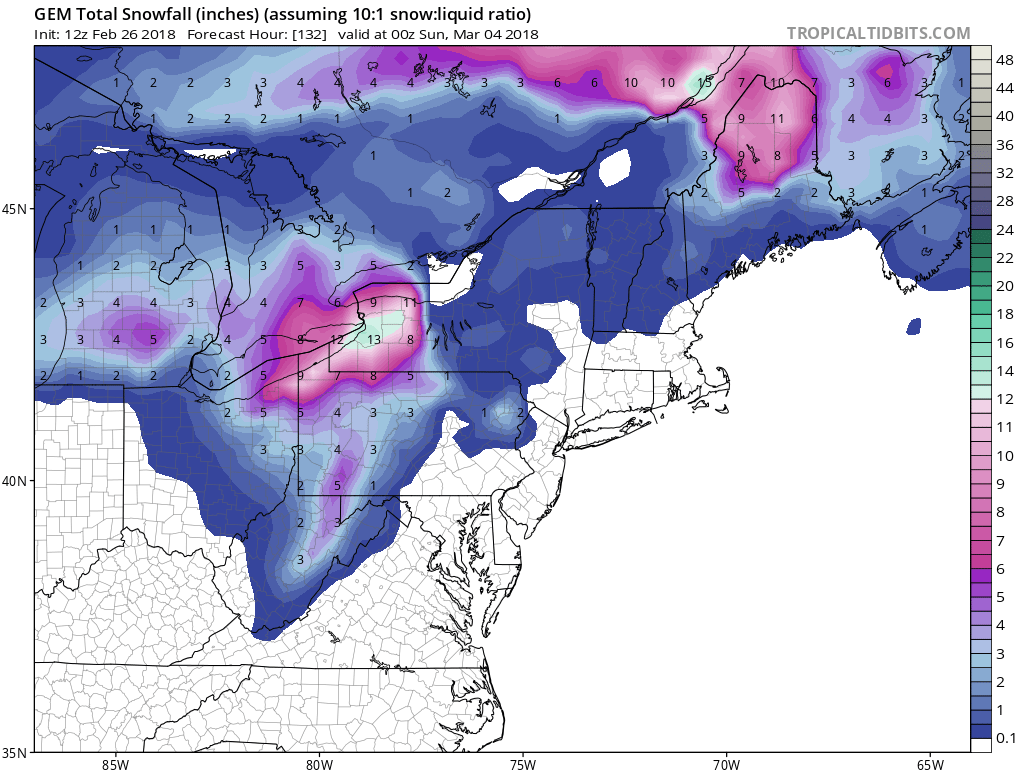 The Canadian model, left, outdoes the American model in accumulations. To which I say, yikes!

My gut/pattern recognition/experience tells me both these models may be overdoing the snow. For one thing, marginal temperatures will allow some melting even in these bigger totals. It’s not a matter of these two models offering out-of-the-question accumulations. Such events have happened with high frequency in the active month of March.

Let's now discuss the most reliable of the global models, the European. It now has joined the American and Canadian crowd with a depiction of more than 6 to 8 inches at higher elevations in Western New York and moderate accumulations closer to the metro area, lighter amounts closer to Lake Ontario.

So, I suppose I’m calling an audible in a print medium. Friday and Saturday are looking wintrier, in my view, than they did over the past weekend. I already had a slightly wintrier forecast Sunday for Friday than other sources did, but this would be something of upping the ante.

To be sure, snow that accumulates with these temperatures will be water-laden and not powder. It simply won’t be cold enough. Yes, models can flip several times between now and the end of the week.

When I’m seeing a trend like this in three global models simultaneously, however, it’s time to call that audible. I offer a moderate confidence Heads Up.