With the issue of mental health awareness ad treatment regularly taking over the news cycle, the Tonawanda City School District is hosting a Community Awareness Forum this week to focus on the subject.

The featured speaker will be retired NFL linebacker Keith O'Neil, who earned a Super Bowl ring with the Colts when they beat the Chicago Bears in Super Bowl XLI but also struggled with an undiagnosed bipolar disorder in his playing days.

O'Neil, an Amherst resident who played for the Sweet Home Panthers, has written a memoir about his illness, "Under My Helmet: A Football Player's Battle with Bipolar Disorder," and he has been an outspoken advocate for those suffering from mental health disorders.

Karl Shallowhorn, a founding member of the Erie County Anti-Stigma Coalition, will address the stigma and myths surrounding mental illness.

"It's our role as a community partner to take some of these issues head-on," said Oldenburg. 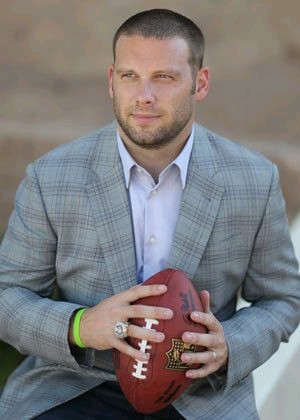 He said school districts have evolved to support students and parents beyond the classrooms. He said part of their role is to be present and visible outside of school so that students are trusting enough to share their concerns.

"I'm proud to say we intercept a lot of issues before they escalate," said Oldenburg.

He said that although it is a small-city school district with 1,785 students, as a first-ring suburb Tonawanda faces some of the same problems as urban districts like Buffalo. In December, the district held a forum on internet safety with the Tonawanda Police Department in December and it is planning a future forum on drug abuse and the opioid epidemic.

"You work so hard to prepare for the unimaginable event, the unthinkable situations," said Oldenburg, who noted disconnects that may have led to tragedies such as the Florida school shooting and Sandy Hook. "These difficult conversations in our homes and in our community, are conversations we have to have now."

The forum, which is free and open to all, will be at 6:30 p.m. Wednesday in the Riverview Elementary School auditorium, 55 Taylor Drive. There will be supervised play for young children in the gymnasium.