ISIS captured Mahya Alqasim and her family in 2014 and forced them into a front-end loader – and into service as human shields.

ISIS drove Jameela Omar, her family and thousands of others of Yazidi descent out of their homes and onto an Iraqi mountain where many, including Omar's young daughter, starved.

So began their lives as refugees – which, last year, brought them to Buffalo.

They brought their trauma with them. Speaking through an interpreter, Alqasim wept as she told of how she lost her husband and her brother as terrorists ravaged her homeland.

Alqasim, Omar and their families joined a small Yazidi community in Buffalo that had been expected to grow until President Trump cut refugee resettlement.

"I have nightmares," said Omar, 32, who lives with her husband and four children in a modest West Side apartment. "I have flashbacks. I have seizures related to anxiety...Still, it is better than the place we left."

Life as a human shield

Alqasim and her husband, Ibraheem Kaleel, led a simple life in northwest Iraq, farming the land their families farmed for generations.

Then ISIS soldiers arrived in Sinjar, Iraq, in August 2014. They forced her and her family and her neighbors into the front loader and drove them two hours into Syria.

"The first thing they told us was that we had to change our faith and start reading the Koran," Alqasim recalled. "They said if you are not going to do this, we will kill you."

Over the next two weeks, ISIS kept its promise.

"We saw genocide on both sides of the street," Alqasim said. "Parents and their children were killed. We saw dogs eating the human flesh."

Amid the chaos, ISIS separated husbands from wives. That's the last Alqasim ever saw of her husband and her brother.

"We have no idea what happened to them," she said, wiping away tears.

The family then found itself shuttled between Syria and Iraq as their terrorist captors used them as human shields wherever the battle happened to be. 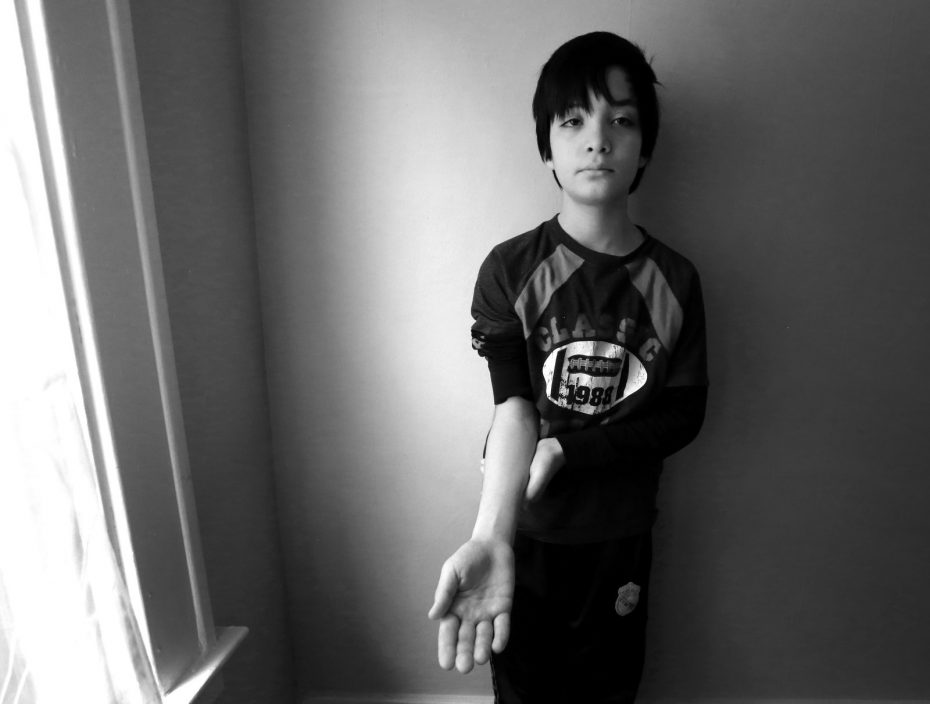 Fadhil Khaleel, 12, reveals the knife scars on his arm made by an ISIS soldier when Fadhil told his captors he was hungry. (Robert Kirkham/Buffalo News)

Proof can be seen in the scars on the right forearm of her son Fadhil Khaleel, now 12. Living on tiny rice rations, Fahdil told his captors he was hungry. A soldier responded by grabbing a knife and slashing his arm.

Fearing for her children's lives, Alqasim made a plan. One night she sneaked past her captors and over to the school where ISIS kept her children. She opened her window, called for her kids and pulled them out one by one.

A friendly Iraqi family hid her and her children until they could flee to a refugee camp in Duhok, Iraq, about 100 miles to the northeast.

Looking around that collection of tents that made up a city of 30,000 outcasts, Alqasim thought: "We've seen death. And now this is going to be life for me and my kids."

A history of horror

The genocide that drove the Yazidis from their homes was the latest and the worst of many.

Ethnically Kurdish, the Yazidis date back more than 6,000 years. They believe in one God, seven holy angels and the reincarnation of Yazidi souls.

Yazidism is nothing like Islam, which is why some Muslims have been trying to wipe out the Yazidis for centuries. The repression started under the Ottoman sultans, and it flared up again after the 1991 Gulf War and the 2003 Iraq War disturbed the fragile peace in northern Iraq.

Then came ISIS. Brian Glyn Williams, a professor of Islamic history at the University of Massachusetts/Dartmouth, visited the Yazidi homeland twice last year. There he saw the remnants of a historic people.

ISIS demolished the Yazidi city of Sinjar and killed upwards of 10,000, most of them men. Williams said untold numbers of girls and young women – far more than were kidnapped by Boko Haram in Nigeria – were turned into sex slaves. Many who survive now live in plastic tents in refugee camps in Iraq and Turkey

"This is a fascinating, peaceful, ancient race that's lost in time," Williams said. "They are the last of the ancient founders of Babylon. To see what's happened to them broke my heart."

Life and death on the mountain

Omar, her husband and four children joined them. Nine months pregnant, Omar trudged past starving refugees who pleaded with passersby to take their children. 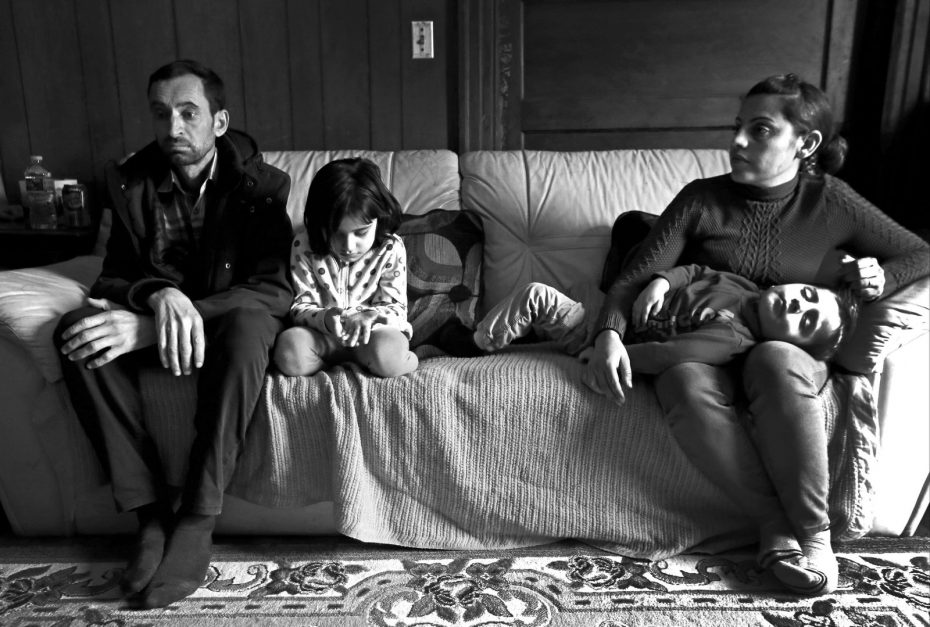 They walked until they came upon thousands of Yazidis together in one spot. There they huddled on the ground in their clothes to sleep at night. They had no food or water.

"People were feeding their kids leaves from the trees to survive," Omar recalled.

Omar and her family did the same.

Like many people on the mountain, Omar's 9-year-old daughter, Nadiman Nyf Kju, grew weak. Five days later, she died. Omar and her husband buried her in a shallow grave and mourned as best they could.

"I cried a lot," she said. "I suffered. But in my mind I knew I had other kids to take care of, so that's what I focused on."

Among them: Majed Alomar, who was born on that mountain. Days later, with a newborn boy in tow, Omar and her family started making their way toward the Duhok refugee camp.

Omar and her husband returned a year later to visit their daughter's grave, only to find the body missing. 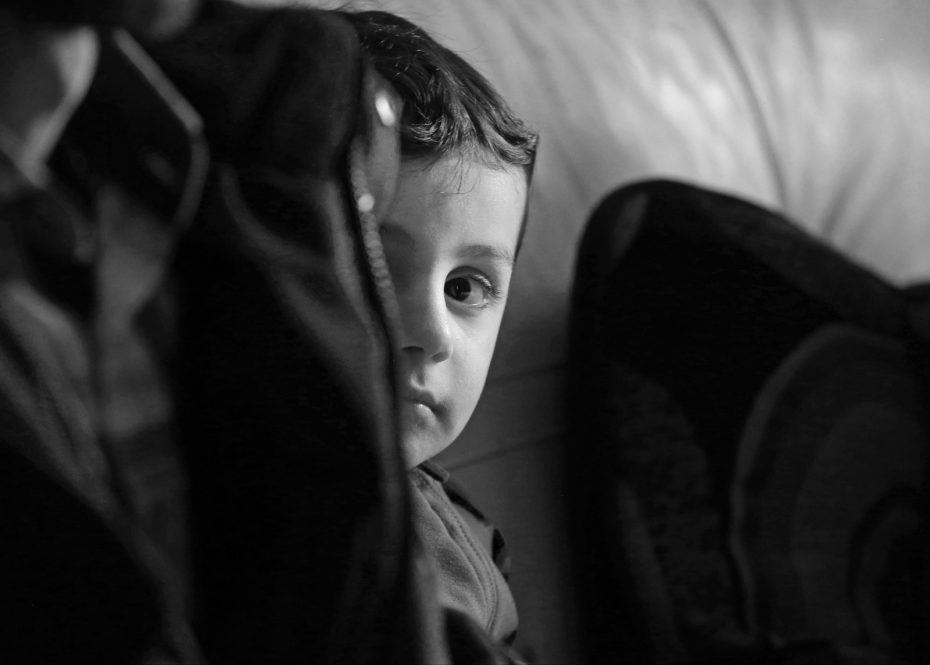 Majed Alomar, 4, listens to his parents talk about the hardships of their escape from ISIS and the long road to America. Majed was born on Mount Sinjar in Iraq, where Yazidis fled seeking refuge from ISIS forces. (Robert Kirkham/Buffalo News)

As Yazidis waited in refugee camps, U.S. and UN officials devised a plan in keeping with America's decades-old policy of welcoming large numbers of foreigners driven from their homes.. The United States, which had accepted a small number of Yazidi refugees since the 1990s, decided in 2016 to invite more.

At least 500 Yazidis were to come to America in 2017, and they would be settled in six cities, including Buffalo, said Gulie Khalaf, a board member of Yezidis International, a nonprofit that uses an alternative spelling of Yazidi.

Then Donald Trump won the presidency. In January 2017, he cut back refugee resettlement and imposed a ban on travel from eight countries, including Iraq.

Trump's policies short-circuited the Yazidi resettlement program. Only about 30 Yazidis refugees made it to America last year, Khalaf said.

Others wait in anger, both in America and the Middle East.

Sadar Balasini, who has lived in Buffalo for several years, has been waiting for his brother, sister and mother to arrive.

"We have families divided because of what's happened," said Balasini, 32. "We want to be one family here to help each other."

By the luck of the draw, Alqasim and Omar and their families found themselves in a city with a dwindling Yazidi population: Buffalo.

About 200 Yazidis lived here in the early 2000s, but many left for Lincoln, Neb., where the nation's largest Yazidi population – 2,000 strong – came together, said Khalaf, one of those who left.

So now Alqasim and Omar rely on a tiny local Yazidi community of about 90 for help as they struggle to adjust.

Five months after arriving in Buffalo, Alqasim's children suffer separation anxiety, fearing that when they go to school, they will never see their mother again.

So instead of working, Alquasim devotes her time to mothering, to trying to calm five children who seem shy and nervous and not quite certain of their place in this new place. 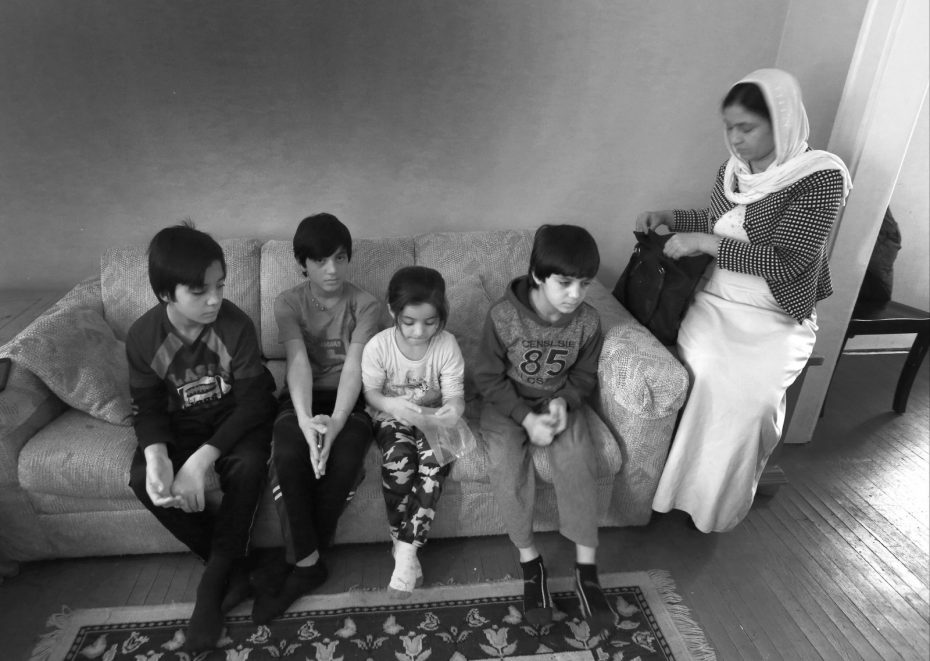 Mahya Alqasim, 37, organizes her children's identification cards in the family's living room in Buffalo. They are, from left, Fadhil, 12, Fadi, 13, Fadya, 7, and Foad, 10. Her husband was taken away by ISIS soldiers.  "It's so difficult being a single mom," Alqasim said. (Robert Kirkham/Buffalo News)

"It's so difficult being a single mom," Alqasim said between sobs.

Members of the Yazidi community visit the Alqasim family frequently and take them out for errands and shopping. They're always fielding calls from her, too, about routine details of living an American life.

"It is so difficult to do this by myself," Alqasim said. "I have too many questions."

And those who try to help her acknowledge there is only so much they can do, given that they, too, are still trying to fit into the Western ways.

"For us, we're an unknown people, and there are so few of us," said Kebbo Kassem, 55, who resettled in Buffalo several years ago and who tries to help the Alqasim family when he can. "It's difficult to create our own place."

That's especially true for a single mother such as Alqasim, who, when she's not taking care of her children, struggles with a larger question.

As recent survivors of genocide, the Yazidis have a harder time adjusting to life in America than refugees who spent a decade or more in a refugee camp before moving to America, Domingo said.

"Their suffering is very fresh," she said. "They are very fragile."

Omar and her family arrived in Buffalo eight months ago, and in some ways, settled in quickly. Her husband, Naif Alomar, quickly got a construction job to support the  family, and the older children enrolled in Buffalo schools, where they are starting to learn English.

Kebbo and other older Yazidis visit frequently and help the family, but outside their West Side apartment, the family feels alone. 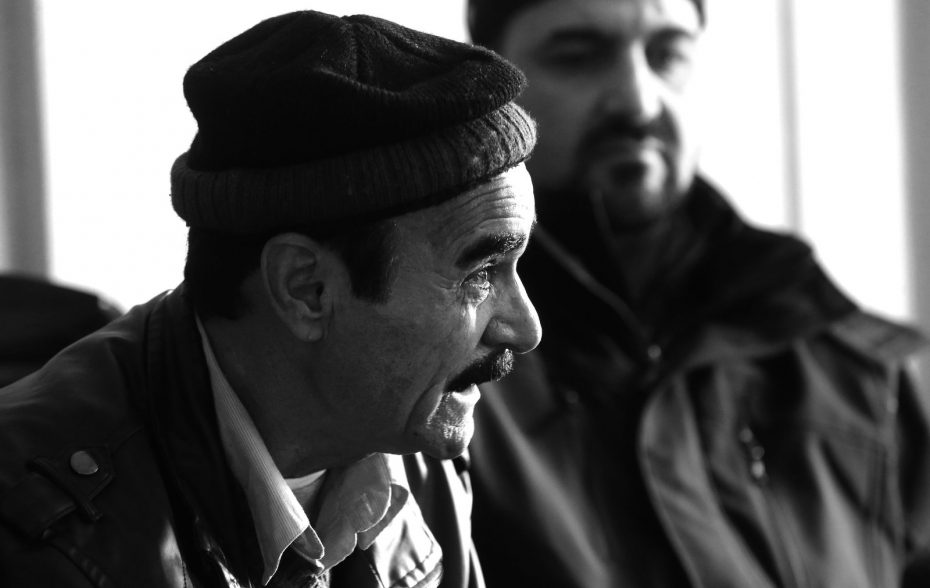 "We don't trust anyone," said Kebbo Kassem of the Yazidi refugees in Buffalo. "Yazidi families, they don't feel safe in Buffalo. They don't know where to go."  (Robert Kirkham/Buffalo News)

"We don't trust anyone," Kebbo said of the Yazidi refugees in Buffalo. "Yazidi families, they don't feel safe in Buffalo. They don't know where to go."

As for Alomar, he worries about his wife. She's tried different medications for her seizures, but still they come and go, sometimes striking when she's cooking dinner.

Even so, Alomar knows their life would be much worse in Iraq.

Alqasim agreed. She said America offered her family one thing that Iraq never could.

When Alqasim first heard about coming to America, she made a vow.

"I will do this just to save my kids," she said. "And I was successful."