Sometimes the way a person walks is enough to inspire another person to follow in the same footsteps.

That was the case for Edward B. "Andy" Enterline.

As a boy growing up in a Pennsylvania coal town, he would watch his Uncle Harv, who had served in the Marine Corps, walk with military bearing on his way to jobs at people's homes. His uncle had quit working in the mines after surviving a cave-in, and the way he walked made it easy to spot him above ground.

Following through on that inspiration, Enterline contacted the Marines and informed them of his interest.

"They sent me a test and I took it and mailed it back to them. That's how it was done in those days if you were from a small town. I was notified that I was accepted in 1938, but my mother didn't want me to join. I was 18 and could have, but my mother was an angel," he said of why he respected her wishes.

Working with the Civilian Conservation Corps, he said, had been a good deal, earning him $15 a month until "war clouds" appeared on the horizon.

"World War II had started in Europe and there were lots of opportunities in Niagara Falls in the chemical industry, and I moved there and made $40 a week," said Enterline, who sent some of his paycheck back home to his mom.

He not only loved her, but admired her. Nancyjane Enterline had been abandoned by her husband, leaving her to raise their two sons on the wages of a seamstress.

But after America entered the Second World War, Enterline said he felt compelled to enlist. He not only wanted to follow in Uncle Harv's footsteps but those of the brave young men who had fought in the first major battle against the Japanese in the Pacific Theater at Guadalcanal.

"It was all over the news and it was the job of the Marines to take islands in the Pacific, and I wanted to be part of that. I enlisted in Buffalo on a Friday afternoon and on Monday I was on my way to Parris Island," he said of Marine boot camp in South Carolina.

A member of the 4th Marine Division, known as the "Fighting Fourth," his first battle was for Roi-Namur in the Marshall Islands in February 1944.

"The battle for Roi Namur lasted four days. Then we returned to Maui, our advance base, and trained for our next mission."

The Battle of Saipan began in mid-June 1944 and went on for a month.

"Saipan was a real battle. We had never been in a battle of this size. It had big hills, massive vegetation and a big beautiful beach we landed on. The Japanese were peppering the beach.  But the sergeant told us, 'Don't worry about that. It's only our engineers blowing up a reef.' "

"We stepped into water up to our waist and everyone had their gas masks attached to their belts and we all took them off for convenience. Later on the beach we were told 400 Japanese planes were on their way to bomb us and they had gas. Well, you should have seen how everyone scrambled to get their gas masks. We'd thrown them in a pile."

"We figured the Navy had shot down most of them. We saw only one plane. It came in low and you could see the pilot. We were all shooting at him," Enterline said, adding he does not know what became of the plane.

After winning the Battle of Saipan, the Marines turned their attention to nearby Tinian and sent the enemy packing in approximately two weeks.

"I was evacuated from Tinian because of Dengue fever. My temperature was 105 degrees and every bone in my body ached. I also had jungle rot on my legs and battle fatigue. I was sent back to Maui on a Coast Guard ship and put in a little hospital with four or five beds.

"I was there about 10 days when this doctor said to me , "Marine, we have a new drug that will take care of the sores on your legs.' You know what that drug was? It was penicillin and in two days I was up and able to walk. I went back to my unit and began training."

The next battle was even more intense. 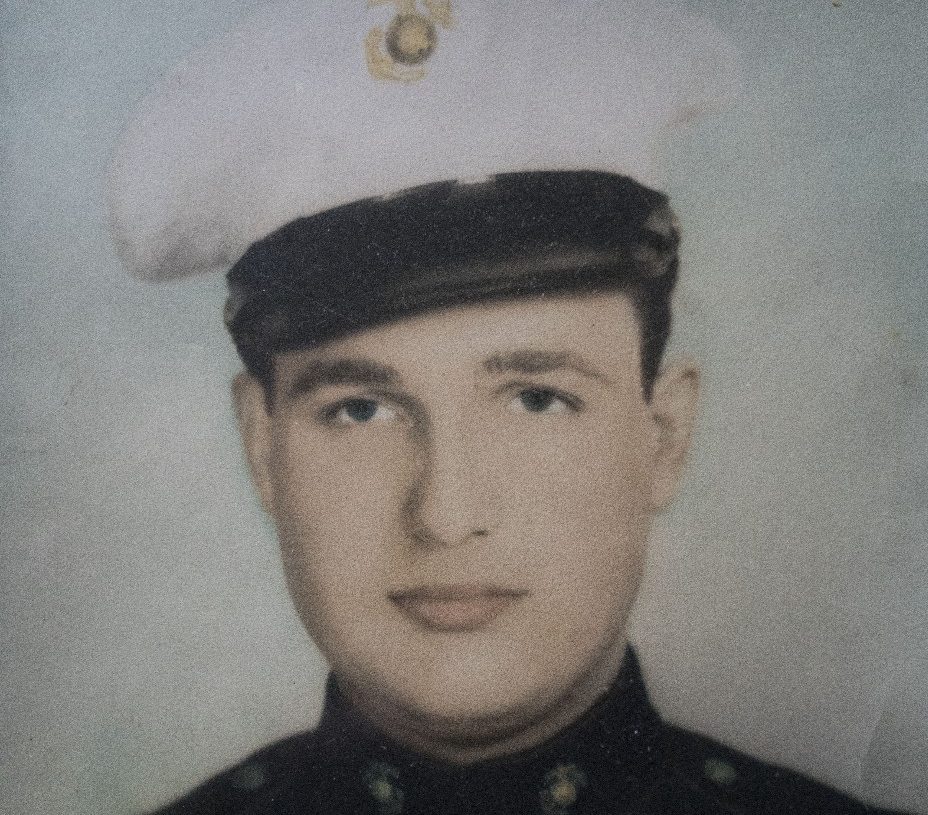 Radio lineman Edward B. "Andy" Enterline used a flashlight and his knowledge of Morse code to summon help from a nearby ship. He sent the message after the engine died on the small boat transporting him and five other Marines to shore for the Battle of Iwo Jima.

On Feb. 19, 1945, Enterline was among the first waves of troops to approach the shores of Iwo Jima, but the engine in the small boat carrying him and five other Marines quit. By late night, they had drifted 7 miles out to sea.

"I spotted what looked like a destroyer in the darkness and asked for a flashlight to send signals and the young lieutenant was concerned that it might be an enemy ship. I said, 'I don't care. This boat has a bilge pump, but it doesn't work when the engine isn't working. We gotta get out of here. We could end up in rough seas.'"

Enterline, who as a radio and telephone lineman knew Morse code, signaled the nearby vessel, which turned out to be a Coast Guard cutter.

"They towed us back to a landing ship and we went up the rope ladder. Then they got us into an amphibious landing craft and took us into shore, and that was my introduction to Iwo Jima. There was an awful lot of shelling. It's almost impossible to describe."

He recalls often taking cover in foxholes he says were easy to dig in the island's sulfur soil, which was warm.

"The next day my captain said they were wiped out and he told me to go up and get their radio. He didn't want the Japanese to get it. When I went up, all three were lying under a poncho and their feet were sticking out.

"My friend Thompson had been wearing a new pair of boondocker boots and they were all white. That's how I knew they were our men. I got the radio and looked for the lieutenant's pearl-handled pistols, but they were gone."

As if to counterbalance the sadness, Enterline recalled a moment of triumph.

He says he watched from a distance as five Marines and a Navy corpsman raised the American flag atop Iwo Jima's Mount Suribachi on Feb. 23. That sight was captured in a photograph and became an iconic WWII image.

"The ships out on the water started blowing their horns and whistles. It was a joyous feeling. It was like at a football game when a touchdown is made."

But the battle continued throughout most of March before it was won. After that, Enterline said, his division received orders to serve as "floating reserves" for the upcoming Battle of Okinawa, "but we were too badly shot up and sent back to Maui."

The Fighting Fourth began training for the intended invasion of Japan, which proved unnecessary. In August 1945, the world's first atomic bombs were dropped on Japan, and the war swiftly ended.

"I remember there was quite a bit of cheering. The officers brought out the booze. It was quite a celebration."

When Enterline returned home to Pennsylvania, he visited for a number of days with his mother before making the nearly five-hour trip to Niagara Falls and resuming his job at Hooker Chemical. A year later, he married the former Edith Patterson, who was known as Pat and hailed from Rural Valley, Pa., not far from Kittanning.

Enterline later became an electrician on construction projects in the Falls, but in the 1960s again changed careers.

"I worked at different recreational vehicle dealerships as a salesman on commissions. I worked until around 1983 but sadly never had a pension. I live on Social Security," said Enterline, whose wife, a nurse, passed away 14 years ago.

He says he does not think of the war, but rather the people with whom he served.

"Right now there is only one person I am in communication with that I served with," he said. "We are getting old."

But there is another person he also stays in touch with.

"I have a brother two years younger than me and he served with Gen. Patton's Third Army in Europe during the war. He lives near Pittsburgh and we talk every week. You know my mother had her two children serving in the war, and she was very proud."