Three minutes into an otherwise friendly interview on MSNBC, the host turned to the corruption trial underway of Cuomo's longtime confidant Joseph Percoco.

“While I have you," interviewer Ari Melber began, "we’re speaking in the middle of a trial of one of your former top aides on bribery (charges)."

It was a moment that showed there are few escape hatches for Cuomo in the Percoco matter.

Though he has spent considerable time in Albany the past couple of months, Cuomo has shielded himself from the Capitol press corps that would, if given the opportunity, regularly ask him about revelations in the trial.

Cuomo took the same approach on MSNBC. Citing a respect for the judicial process during an ongoing legal proceeding, Cuomo would not discuss the case.

The restricted access has not stopped or reduced coverage of the trial. In the five weeks of testimony in a lower Manhattan courtroom, the Percoco case has both underscored the ugly ways in which state government sometimes operates and opened up potential political vulnerabilities for the governor as he seeks re-election this year.

It’s not over. The more sweeping Buffalo Billion trial, over pay-to-play allegations involving some of Cuomo’s top economic development projects in Buffalo and elsewhere upstate, is set to begin in front of the same federal judge in three months.

The predicament has left Cuomo’s critics to try, at least, to have a political field day at his expense.

“This is the beginning of the end of Andrew Cuomo’s governorship,’’ said Edward Cox, the state Republican Party chairman.

There are tweets and news conferences by GOP candidates hoping to take on Cuomo in the fall’s general election.

Democrats strongly push back, and relish in noting that Republicans had – and still have – their own corruption-related problems.

A case with many potential pitfalls

For the governor, who is not charged by prosecutors with any wrongdoing, there are no wins in the Percoco trial.

Cuomo rode into office in 2011 promising to clean up Albany’s reputation. But he is now viewed by 49 percent of registered voters as part of the state government’s ethics problems, according to a Feb. 15 Quinnipiac University poll. A separate Siena College poll found the governor’s favorability and job performance ratings sliding.

With his name coming up each day in the trial, Cuomo could feel backlash from a number of trial revelations:

* Someone high up in the administration let Percoco keep his government-issued security swipe card to gain access to his former state office in Manhattan – adjacent to Cuomo’s own government office – for eight months in 2014 after he left the state payroll. At the time, Percoco was running Cuomo’s re-election campaign as a private citizen.

* At one private fundraiser, Cuomo took $125,000 from five limited liability companies connected to Cor Development, the Syracuse company that saw its state-funded projects soar after it began making the donations and hired a now-disgraced former lobbyist, Todd Howe. Howe's connections with Cuomo go back decades and he advised Cor officials how to best “leverage” their donations with politicians in New York.

The donations, long-practiced by Democrats and Republicans, are legal under New York’s campaign finance laws. But they are slammed by watchdog groups that say these types of donations offer a way around contribution limits from companies.

* Cuomo administration officials turned to private emails to conduct official state business, making the communications all but impossible to obtain by the public through the Freedom of Information Law.

* Schedules released by Cuomo’s office pertaining to who the governor meets with in an official capacity are hardly forthcoming when it comes to revealing everyone who attends gatherings where major government decisions can be decided. Linda Lacewell, Cuomo’s chief of staff, testified that deciding who goes on the scheduling documents – released to the public months after they occur – is “not an exact science.’’

* Cuomo oversaw an office where some staff members were pressured into not leaving their jobs. The pressure, testimony showed, would go so far as to include calls to a company or agency wanting to hire a Cuomo staffer to tell them to halt the job offer.

* Some policy and fiscal decisions were influenced by people who prosecutors say used bribes given to Percoco in ways only subpoenas could reveal in order to enrich their companies and themselves.

* Donors with key work before the state were afforded access to decision-makers in Albany, according to email evidence released during the trial. One of those companies, Competitive Power Ventures, whose former executive, Peter Galbraith Kelly, is on trial with Percoco, was asked to line up a private jet for Cuomo during the last days of his 2010 campaign, according to testimony. 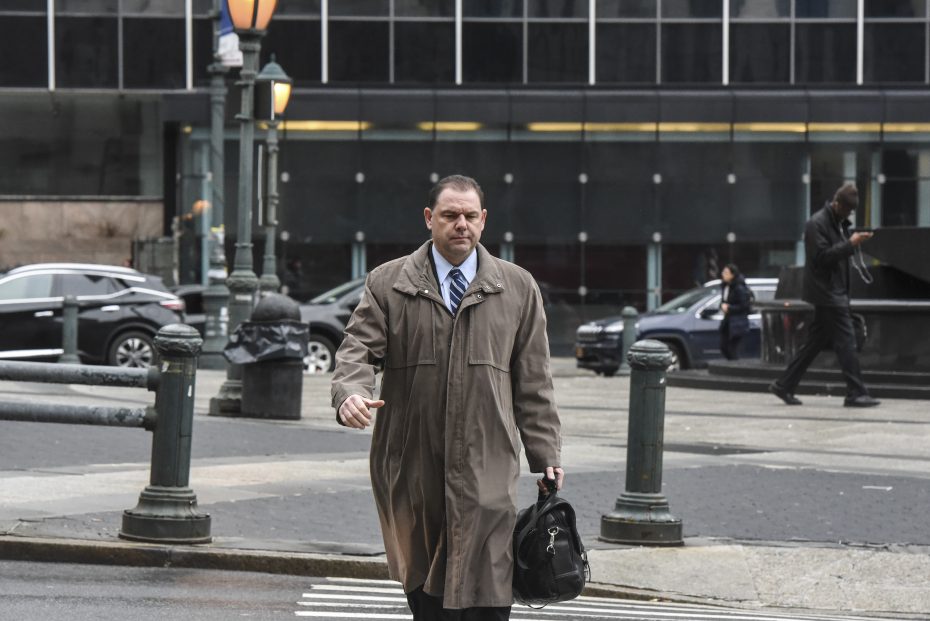 Joseph Percoco arrives for his corruption trial in New York City on Feb. 16, 2018. (Stephanie Keith for the New York Times)

Beyond the trial’s bribery, extortion and conspiracy allegations, the lingering question in Albany is how Percoco could have so misled Cuomo. Prosecutors say Percoco was involved in a two-pronged bribery scheme involving more than $300,000 in payoffs funneled through Percoco’s wife, allegedly to pay for Percoco’s power to influence government decisions that financially benefit Cor Development and CPV, the energy company.

Percoco and the three business executives on trial with him maintain no illegal acts were committed. On the first day of presenting their defense cases Thursday, their lawyers urged a federal judge to dismiss the charges on a number of grounds, not the least of which, they said, is that the government has failed to prove corruption occurred after nearly five weeks of prosecution witnesses and evidence.

In a hallway near the courtroom where he’s spent the last five weeks listening to lawyers, witnesses and a judge talk about him, Percoco, who led both of Cuomo’s successful gubernatorial runs, was asked if he believed his trial could politically harm Cuomo. Percoco shook his head, declined comment and went back into the court.

A dark time in Albany

In the world of Andrew Cuomo, it wasn’t supposed to be this way.

On his second day in office as governor in January 2011, Cuomo issued one of his first executive orders: mandating ethics training for top officials in his new administration. “Honor and integrity will be a hallmark of this administration, and I am confident that we have assembled a team that reflects that commitment,’’ Cuomo said at the time.

Seven years later, his close ties to one of his aides has come up repeatedly in court.

Percoco’s lawyer, Barry A. Bohrer, didn’t disagree. “He moved to Westchester (County) to be closer to the governor who lived in Westchester. The governor got to drive his motorcycle by Joe’s house.’’

Republicans are trying to use those connections to paint Cuomo as politically damaged.

Cox points to former New Jersey Gov. Chris Christie, whose political fortunes declined after his allies were caught up in an embarrassing – and, it turns out, criminal – episode called Bridgegate. No criminal case was ever brought against Christie, but three key Christie allies were convicted for their role in shutting down lanes going onto the George Washington Bridge, causing a massive traffic jam for days in a political revenge scheme against a mayor who didn’t support Christie’s 2013 campaign.

Democrats dismissed Cox’s criticisms as, at best, hypocritical. Geoff Berman, executive director of the state Democratic Party, which Cuomo controls, said Cox “and this anemic field of Albany insiders and lobbyists” are trying to divert attention from the “weak candidates” the party is considering to run against Cuomo this fall.

As Cuomo prepares for a likely third-term run and with allies talking of him as a potential contender for the White House, the impact of the Percoco trial remains to be seen. His team, meanwhile, is fighting back against critics who on a near-daily basis try to remind voters of the Manhattan proceedings and the Buffalo Billion trial that will follow.