Every girls basketball team going up against Cardinal O’Hara knows the keys to keeping the game competitive.

No. 1 is limit turnovers. The Hawks play 32 minutes of relentless, in-your-face defense and force turnovers in bunches. O’Hara can put a one-possession game out of reach faster than anyone around.

To avoid turning the ball over, opponents must slow the game down on both ends of the floor. The second key is to maximize offensive possessions by working it around efficiently and then get back on defense before the Hawks race the ball down the court.

Sounds simple, but it’s easier said than done. Just ask anyone who has faced the No. 1 team in Western New York over the last five years.

Even after spotting No. 4 St. Mary’s of Lancaster a 7-0 lead to start the game, top-seeded Cardinal O’Hara cruised to a 60-35 win in the Monsignor Martin Class A semifinals Sunday afternoon at Villa Maria College.

In winning their 88th straight game against local competition, the Hawks advanced to Friday’s Class A championship against rival Sacred Heart at 7:45 p.m. at Villa Maria. The winner of that game will advance to the Class AA state playoffs. The loser will represent Buffalo in Class A.

The second-seeded Sharks won the second semifinal over No. 3 Mount St. Mary, 60-49.

Despite the double-digit wins, it took total team efforts for O’Hara and Sacred Heart on Sunday.

All eight players in the regular rotation scored and played big minutes for the Hawks, who started the game with star junior Angel Parker on the bench because she was late to the pregame shootaround.

That’s part of what allowed the Lancers to race out to the 7-0 lead, but O’Hara scored the next 10 and ended the first quarter with a 15-10 lead.

“Once she came into the game, the tempo went up,” O’Hara coach Nick O’Neil said of Parker. “She’s like our MVP – to me she’s the best player in Western New York – and she does everything for us to change the tempo.”

Senior forward Kiara Johnson picked up the slack on the offensive end. The Eastern Michigan commit scored 14 of her game-high 18 points in the first half, helping O’Hara take a 31-19 lead into the break.

“She’s one of the better big girls in the area, and we think games like this she should dominate,” O’Neil said. “I expect a little more out of her, but I just think today she did an outstanding job.”

O’Hara turned up the defensive pressure after halftime, ending the third quarter on a 9-2 run to take a 47-27 lead heading into the final frame.

“Our defense is what carries us,” O’Neil said. “I haven’t seen a lot of teams that can play defense like us, and it is an advantage for us to have that and be able to pull that out the bag every game.”

Senior Cierra Harrison had 13 of her 17 points during the final 16 minutes, including a pair of threes. The other six players on the scoresheet added between two and six points.

“It’s really tough to just say we’re going to shut down this one player because we have three or four other players that can step up and do the same thing,” O’Neil said.

The start of the second semifinal was similar to the first, with Sacred Heart opening on a 10-0 run and taking a 19-12 lead into the second quarter.

Sharks senior Micaela Ryan (11 rebounds) had eight of her game-high 21 points and junior Jennifer Grimm scored seven of her eight over the first eight minutes. 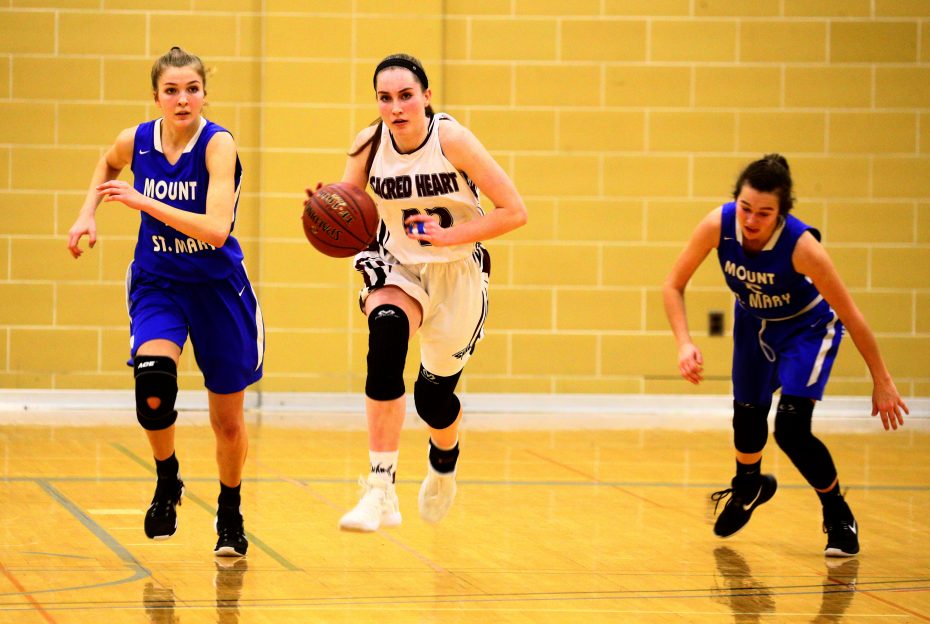 Micaela Ryan on the break during Sacred Heart's 60-49 win over Mount St. Mary in the Class A semifinals. (John Hickey/Buffalo News)

The Thunder settled down and pulled within two points three times in the second quarter and got within 25-24 with about 1:30 left in the half before Sacred Heart sank three free throws to take a 28-24 lead at half.

A three-pointer by Lauren Mucica (14 points) and a Jillian Fittry bucket gave Mount St. Mary its first lead, 29-28, 1:15 into the second half. Another three points by Grace O’Brien (13 points) gave the Thunder their largest lead at 32-28.

Sacred Heart was held off the scoreboard until past the midway point of the third quarter, which forced first-year coach Carrie Owens to make a lineup change.

“In the second half I took away the post play and I went back to five guards, which is how we played them last time,” Owens said, referring to her team’s 73-58 win on Feb. 9. “We were able to kind of control the game in that manner.”

The Ryan sisters, Micaela and Siobhan (11 points), a sophomore, took over the rest of the third quarter. They went on an 11-3 run as a duo in the span of two minutes to help the Sharks regain the lead and take a 42-37 advantage into the fourth.

After that, it was the Sacred Heart’s supporting cast that stepped up.

Eilzabeth Hill, Kayleigh Colleary and Erin Hardick combined for 13 points, and the Ryans added five during the last eight minutes after Mount pulled within 42-39 a minute in.

“It’s honestly the best feeling having everyone score and being an overall team,” said Micaela Ryan, who’s headed to Elon University in the fall. “That was awesome that those players stepped up. We really needed that. We wouldn’t have won without them.”

The Sharks turned the ball over a season-low 11 times against Mount St. Mary. That’s a recipe for success against their next opponent, Cardinal O’Hara.

In 59-48 and 72-55 losses to the Hawks this season, Sacred Heart has nearly 80 turnovers. That’ll be the No. 1 focus for Owens during practice this week.

“I tell my team all the time that you can’t win against any great team with that many turnovers,” Owens said. “With O’Hara, as athletic and as fast as they are, you turn the ball over and they’re taking it in and scoring. We need those possessions and we need to take care of the ball. If we don’t, it gives them twice the opportunities to score.”

The Sharks handed O’Hara its last local loss in the 2013 Monsignor Martin championship to win its fourth straight league title. The Hawks have won the last four since and look to make it five during Friday’s showdown.

“O’Hara’s a great team,” Micaela Ryan said. “We just have to work on not turning it over and getting flustered with their press because they’re really fast. As long as we minimize our turnovers and just play as a team, I think we have a chance to beat them.”