Wendy Miller Backman may just have one of the best jobs in Western New York – she grants people their wishes.

Backman has helped reunite a mother and her son after a nine-year absence; set up a World War II veteran in a Buffalo Bisons’ box with his family; delivered what would be the sole Christmas present one elderly woman said she would receive; and has made guitar lessons possible for Saturnino “Nino” Burgos.

"I know three notes," laughed Burgos, a Niagara Falls resident. “I start from scratch. I ask, ‘Do you think I can learn?’ And the teacher said, ‘Yes.’ ’’

Burgos was granted his desire for guitar lessons through Senior Wishes, a program of the United Church Home Society (UCHS). Backman serves as the society’s executive director and started Senior Wishes four years ago, fulfilling the dreams of low-income seniors. The program has granted 139 wishes to date.

“My thinking is that just because you are aging doesn’t mean that there aren’t still things you want to do and people you want to see, but if you are living on just Social Security, and most of our seniors are, you can’t afford to do these things,” Backman said. “This is for people who don’t have family who can do these things for them.”

Burgos is taking lessons from Jason Beaudreau, owner of the Guitar Woodshed, located in the Niagara Arts and Cultural Center at 1201 Pine Ave., Niagara Falls.

“I will practice in the house,” Burgos promised. “I want to play guitar to worship the Lord.That is my hope.”

Having served as caretaker for his grandparents, Beaudreau said he was “thrilled” to be contacted by Backman to be part of the Senior Wishes program.

“Our community-based music school’s whole idea is to improve quality of life through music,” Beaudreau said. “And the Senior Wishes program is really in alignment with this, honoring and recognizing the accomplishments of seniors and improving their quality of life.”

The program has income guidelines but they are waived if an applicant is a permanent resident of a care facility.

“We’ve granted a couple of wishes for residents at the Odd Fellow and Rebekah Rehabilitation and Health Care Center in Lockport, for example,” Backman noted. “One woman there wants to see Niagara Falls at night, to see the lights, and we’re waiting for the weather to break for that.” 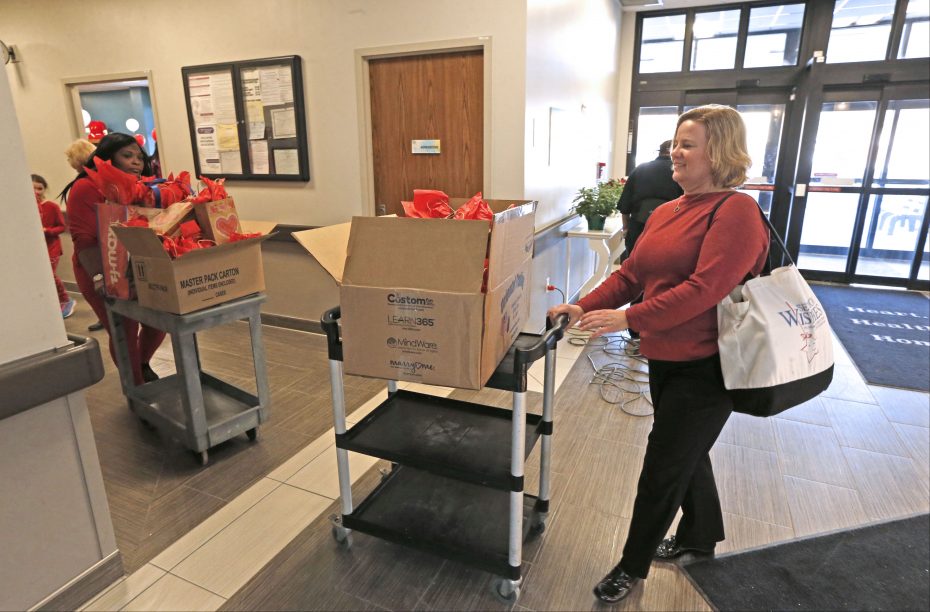 Wendy Miller Backman, executive director of Senior Wishes, visited the Ellicott Center for Rehabilitation and Healthcare, a skilled nursing facility in downtown Buffalo, with volunteers to distribute gift bags to 120 residents. The organization grants a variety of wishes to low-income senior citizens. This was on Valentines Day, Wednesday, Feb. 14, 2018. (Robert Kirkham/Buffalo News)

Through Senior Wishes, Backman is carrying on the UCHS’ centuries-old tradition of “serving God’s people and expressing our love and concern for one another.”

The UCHS was founded in 1877 when six German Evangelical churches came together to serve the needs of the elderly, regardless of faith, establishing its first home in Forks, a hamlet of Cheektowaga, before relocating to Amherst Street in Buffalo in 1954 and selling the property in 2003. It also partnered with the U.S. Department of Housing and Urban Development in 1985 to create the United Church Manor in West Seneca, where it still provides housing for low-income seniors and disabled residents. It opened Fox Run in Orchard Park, a continued care retirement community, in 2007.

Senior Wishes is headquartered at Fox Run and serves the qualified elderly throughout Western New York, concentrating on Erie and Niagara counties. Backman joined the UCHS staff in 2013 and founded Senior Wishes and fulfilled the first dream just one year later. She’s added a part-timer to her staff and sometimes relies on volunteers to help accomplish some of the group’s larger goals, as well. The Senior Wishes committee of eight meets every other month to review and accept wish applications.

Backman visits senior centers and assisted living facilities to spread the word about her organization – reaching out to anyone who works with the older population.

“I go anywhere and everywhere,” she said.

She started an offshoot of Senior Wishes this past holiday season, “Simple Wishes for the Holidays.” Learning of individual senior needs through local senior agencies, her group was able to provide such gifts as a pair of gloves, a hat, a blanket, even a frying pan or toaster to someone in need. It became clear that these small gifts had a big impact.

“Each senior received a wrapped present and card and one woman told me it would be the only gift she would receive this holiday,” Backman said. “We granted 62 simple wishes, many to the really poor in rural areas, and I hope to bump that number up to 100 for the next holiday season.”

How does her group finance these wishes? Through individual and corporate donations and through one large fundraiser each year, called “Sips, Suds and Sweets,” which is slated for 6 to 9 .m. April 19 at Fox Run, 1 Fox Run Lane, Orchard Park. Pre-sale tickets are $50 and may be obtained through the website: www.seniorwishes.org or by calling 508-2121. Tickets are $60 at the door. Senior Wishes is still accepting corporate sponsors.

Backman also encourages interested companies to engage in “Dress Down Days,” when employees make a donation to dress more casually on a set date.

“One company sent us $1,200 from a Dress Down Day, and it’s a great opportunity for us to expand knowledge about Senior Wishes, too,” she said. “It’s a win-win because it’s a great way for the community to find out who we are and what we do.

“I think we could help a lot more people if they knew about us,” she said. “These wishes are for things that these seniors and their families never could have had on their own.”

Applicants must be 65 or older, with an annual income of less than $38,000 for a single household or $44,000 for a household of two, and unable to fulfill the wish on their own.

“We don’t receive as many applications as one might think, so we haven’t had to turn many wishes down,” Backman said. “We just had the most requests we’ve ever had in one month in January. We approved 12 of the 14 requests. It’s because this population doesn’t want to ask for anything, especially those age 75 and older. They are very proud.

“We had one World War II veteran and he received our rack card through Meals on Wheels and threw it away,” she recalled. “His daughter saw it and asked what it was and he said, ‘Let somebody more deserving apply.’

“He had always wanted to get his whole family together in a box for a Bisons game and his daughter applied for him for the wish,” she said. “It was one of the best wishes we’ve ever had. I called the Bisons and they let him throw the first pitch and had a jersey made up with his name on it. He was the military hero of the night there, too.

“When he passed away I went to his wake and they had the photo album there we had made for him, and the family told me he had never stopped talking about that night,” Backman added. “That shows you how impactful this program can be.

“We’ve also worked with the Buffalo Sabres and were able to get three of our seniors to lunch with the television crew, get a tour of the Sabres’ locker rooms, meet some players and go to a game,” she said. “They are still talking about it. What a great thing to be able to do this for seniors!”

Backman recently took some time to chat about the program and the people it has helped.

“I love what I do and I want to help even more people,” Backman said. “It’s whatever brings them joy. Isn’t it cool to be able to do that?”

Q: How did this come about?

A: I started working for the United Church Home Society Inc. (UCHS)  in 2013. It’s the second oldest nonprofit in the Buffalo area, started in 1877.

I’m a social worker and I have always had an affinity for seniors. I did some research and there are wish-granting programs elsewhere in the country but the closest one to us was in Erie, Pa. We started Senior Wishes here and granted our first wish in 2014.

Q: What was that first wish?

A: There was a woman, Grace, who had been passionate about photography in her younger years, but had set it aside to raise her family. We had her work with a professional photographer, Katie Schneider, of Buffalo, for several hours one day at her studio and learn about lighting and composition, etc. Someone had given her a camera and she learned how to use it.

Q: Please give us some other success stories:

A: We had a 93-year-old Niagara County woman who plays Mrs. Claus and she always wanted a sleigh ride. Last March, there was a freak snowstorm and we got her to Kelkenberg Farm. We got her a sleigh ride and hired a bus to take everyone from her apartment complex, too, and had a little party and gave them favors in little buckets because the sleigh ride was on her bucket list.

We had a veteran in the Batavia Veterans Administration Medical Center who was very ill and he had always wanted to meet one of the Buffalo Bills. He had been a lifelong season-ticket holder. One of our committee members knew Thurman Thomas’ wife. It happened that Thurman was going to be at his restaurant in Batavia and he went over and visited with this man and just spent time with him and held his hand. The man passed away shortly after.

We had a woman on Grand Island a few years ago who hadn’t seen her son in nine years. He lived in Wisconsin and was a veteran who had been injured in Iraq and couldn’t travel and she was in a wheelchair here. She sent such a heartfelt application.

There were a lot of barriers, but we sent her for a weekend to visit with him and be reunited with her granddaughter, whom she hadn’t seen since she was 2. We got her a wheelchair-accessible room in a nearby hotel, where she could visit with family. When she got back, she was sobbing, I was sobbing, and she said she could never thank us enough. She didn’t know when she’d ever see them again. This is what it’s all about.

I could tell you lots of stories that would make you cry.

Q: Are these wishes expensive?

Some wishes are phenomenal and others are just average. This is just something that these seniors and their families could never have had otherwise. It’s what brings them joy.

Q: How can people learn more?

A: People love to follow us on Facebook and within a day or two of granting a wish, we post the people receiving their wishes in real time and everyone can see all of the fun wishes we’re doing. They can also go to our website, www.seniorwishes.org, to receive our newsletter or learn how to volunteer or donate or for a wish application.