The warm-again, cold-again roller-coaster is back to warm-again in Buffalo for Friday and the upcoming weekend.

However, it could be a little bumpy at times, especially toward the end of the weekend, the National Weather Service said.

Rain is likely across the Buffalo Niagara region today, with up to one-quarter inch possible during the day and less than one-tenth inch more tonight, the weather service said. Today's high will flirt with 50 degrees with overnight temperatures in the mid to upper 30s.

The weekend will start out relatively uneventful with a 20 percent chance for more rain late Saturday afternoon and highs in the mid-40s, forecasters said.

The next storm system is expected to approach the region late Saturday into Sunday, bringing wet, then windy, conditions. Up to one-half inch of rain is likely Sunday. The bulk of the rain is expected through the mid-morning with temperatures on the steady increase. It'll be warm with highs in the upper 50s expected during the late morning to early afternoon. 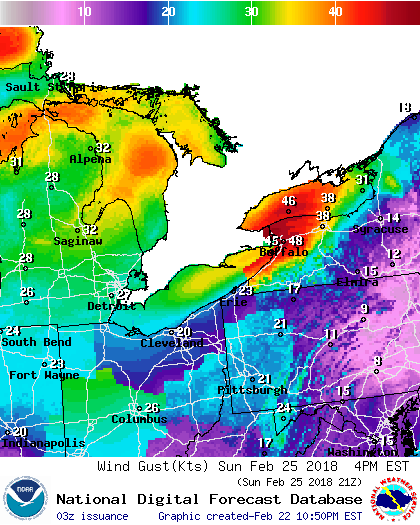 The highest wind gusts are expected across the Niagara Frontier on Sunday. They could gust between 50 and 60 mph, according to the National Weather Service. (NWS Buffalo)

"Strong to damaging winds are possible," the weather service said.

The watch runs from 9 a.m. to 6 p.m. with the highest winds expected between about noon and 5 p.m., forecasts show.

A high wind watch in Chautauqua County was added to the list today. It starts a little bit earlier at 2 a.m. Sunday.

"Unlike the recent warmup, there will likely only be a tiny window between the ending rain and imminent winds for one to enjoy the spring conditions," the weather service said.

Winds of the magnitude that are expected are capable of causing property damage from downed trees and power lines, forecasters said.

"Shallow-rooted trees may be downed more easily with the recently thawed and saturated soil conditions," the weather service said.