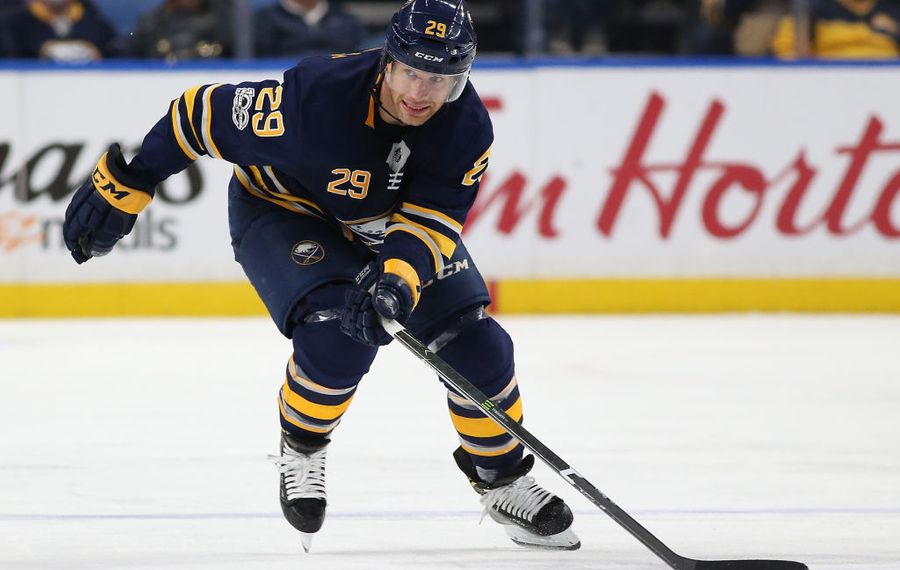 Blashill went off to Detroit reporters following the game due to the lack of a goaltender interference call against Jason Pominville on Evander Kane's wraparound goal that gave the Sabres a 2-1 lead in the second period.

Pominville skated directly into the crease and appeared to slightly impede the stick and movement of goalie Jimmy Howard moving to his left as Kane beat the goalie to the post and stuffed the puck home for his 20th goal of the season. The play was challenged and reviewed, but the goal was allowed to stand.

"I think Hockey Ops had done an unreal job for the first part of the year of making a grey rule as black and white as they could," Blashill said. "Basically, if you went in the blue on your own and you made contact with the goaltender and kept him from being able to play his position, it was going to be called back. I could go to my guys and say exactly what it was."

The league's ruling in conjunction with the on-ice officials was that "the position of Buffalo's Pominville did not by itself impact Howard's ability to play his position in the crease and therefore no goaltender interference infractions occurred."

During the MSG broadcast, analyst Martin Biron blamed Howard for the goal and not interference.

"If Howard wants to make the save on Kane's goal all he needs to do is go butterfly slide on the wraparound," tweeted Biron, the longtime Sabres and NHL netminder. "Pominville had no impact on the goal being scored. Howard played it wrong, simple call. Good goal."

"We've seen harsh interferences where they actually interfere and it's a goal," Lehner said after practice Friday in Kettler Capitals Iceplex. "They hang on goalies, push on goalies, lay on goalies and it's been a goal. That one yesterday, he never touched him. If we cross a line where you can't touch with the tip of your stick a goalie's stick, then we might as well put a rule in that the players can't be in the blue paint at all. If that's the standard, that would be ridiculous.

"Pommer didn't hinder him from going post-to-post whatsoever. If the coach thinks he hindered his stick, a goalie doesn't go with his stick to the post. No goalie in the league goes post to post and leads with this stick. The stick has nothing to do it."

Pominville said Friday he had no idea which way the call would go.

"I honestly had no idea. I kicked the puck to Kaner and drove the net thinking he might come back to me with it," Pominville said. "When I saw the replay, I wondered if my stick was there but I saw another angle and the stick didn't prevent him from sliding across. I can't say I wasn't in the crease. I'm standing right there but I don't think I preveented him from going across which was why they allowed it."

Blashill went on to say that this goal was an outgrowth of small-group meetings at the All-Star Game and Commissioner Gary Bettman's news conference that said goals should be wiped out only for obvious violations, and that referees needed to stop searching for reasons to disallow them.

"There was a feeling that too many goals were getting called back so they want to go back to this term 'egregious,'" Blashill said "Well, what's egregious mean? So now we're back to ultra-grey. All I know is Pominville had no reason to go into the crease, zero. He stood literally in front, right on the goalie. So I don't know what goalie interference is now. I don't know what egregious means. I know for sure that the player went in on his own, didn't allow our guy to play his position, kept our guy from making the save. I'm not sure what goalie interference is if that's not goalie interference."

Marco Scandella's overtime winner in Detroit came with 0.2 seconds left on the clock and was the second this season in the NHL to come at 4:59 of overtime. Los Angeles' Tyler Toffoli also pulled the trick Oct. 28 against Boston, a play that came off a faceoff with 0.9 seconds left and ended with the puck in the net at 0.4. The Sabres' last won in the final second of OT in 2016 against Carolina, when Jack Eichel scored on a breakaway to beat Carolina.

Center Johan Larsson had his first two-point game since October, with one of his two assists being a back pass to Scandella. Larsson said Friday he had no idea how much time was left on the clock.

"I knew we were inside a minute when I got on the ice," Larsson said. "I had no idea when I got the puck. I saw he was behind me and thought he might have a better view.

Larsson has just three goals -- two into empty nets -- in 59 games this season. He had six goals in 36 games last year before being lost to a serious elbow injury and 10 two years ago. He's also been plagued by penalties in recent games with seven minors, a major, a match and two-game suspension dotting his last nine games. His tripping penalty with 2:56 left Thursday allowed the Red Wings to tie the game on a power play via a Justin Abdelkader goal with 1:25 to go.

Declining to play safe with trade assets pays off for Sabres

"Obviously, it's getting a little ridiculous right now," Larsson said. "You feel like they're calling everything I do and that makes it hard. I dont want to take those. Yesterday was unfortunate getting a stick between his legs and he fell down but it's something I just have to clean up.

"It's a fine line because when he plays with emotion, he's really good, he's aggressive and he attacks the game," Housley said. "The penalites we can do without for sure and it's an area we continue to talk to him about. It's all stick position. He rides a guy out and just needs to get his stick back on the puck."

Based on Friday's practice, Nicolas Baptiste and Justin Falk will be the healthy scratches Saturday in Washington. Neither was involved in line rushes.

The Sabres are not expected to hold a pregame skate Saturday. Georgetown and Providence have a Big East basketball game slated for a noon tipoff in Capital One Arena, forcing the Sabres to again trudge to Virginia if they want to skate in the morning before shuffling all their equipment back downtown for the game in the arena.