When Dan Loncto first took over as race director in 1985, Buffalo’s stop of the J.P. Morgan Corporate Challenge Series had about 1,700 finishers. There were no tents crammed into every available space on the Delaware Park lawn. And there certainly was no electronic timing system.

The stories are plentiful and the memories entertaining. But after 33 years as the event’s race director, Loncto and his wife, Alice, decided to leave the post, transferring the duties to Melina Buck.

“I look at it the same way when Alice and I decided to sell the store. It was just the time to do it,” Loncto said from Florida. The two owned and operated Fleet Feet in Buffalo until selling it in 2014.

They stayed on as the race directors for the Corporate Challenge, bringing Buck in closely to work with them. The baton has officially been passed as J.P. Morgan Corporate Challenge Series announced their dates for the 2018 season with Buffalo hosting the 3.5-mile race on June 14.

“It really is a staple of the Buffalo running calendar,” Buck said. “I love this running community and there are great local races, but this one is really unique. It draws so many people from your serious runners to people who wouldn’t normally race. It gives those people a reason to participate in a running event.

“I’ve been working with Dan and Alice for the last few years and have taken on a bigger role each year. It’s been a natural progression, I would say. But it is a little scary. It’s a big job and Dan’s done it for 33 years – longer than I’ve been alive.”

And a lot has happened in those 33 years as the race has evolved from a small event in Delaware Park to one of the biggest parties, er, races of the year.

Buffalo is one of just 13 cities that are part of the series and the second oldest behind New York City. And my how the race has grown since Loncto became the race director in 1985. The first year in Buffalo had 1,712 entrants from 125 companies. Ten years later, it had grown to 7,308 runners from 284 companies. By 2015 there were 12,375 runners with over 350 hospitality tents in Delaware Park. 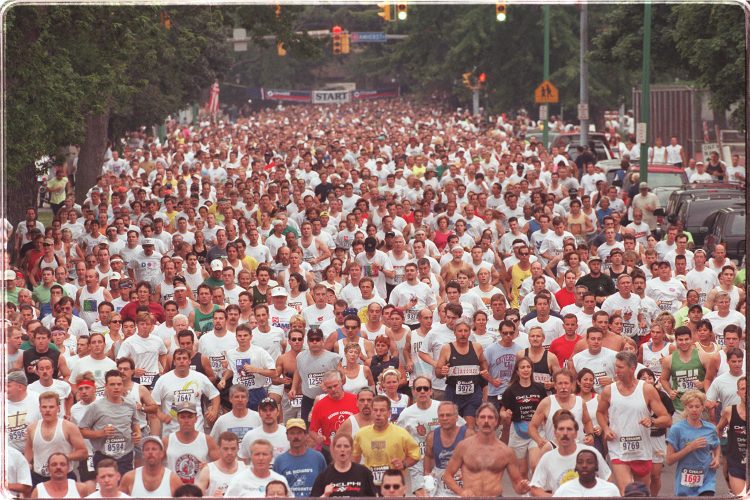 He credits the initial growth to a change in the series, which sent the winning teams to New York for the overall championship.

“That’s when the race took on a whole other dimension,” Loncto said. “It was a really big deal to in and get this free trip to compete on Park Avenue in New York City. That resulted in us getting every good runner that ever existed in Buffalo to run in, or even to have won, the race over time.”

And how things have changed over time. When the race began, all entries were paper entries (recall there was no Internet hence no on-line applications) and members of the Greater Buffalo Track Club volunteered to type runner’s information for the entry list. Packet pick-up was at the Loncto’s house.
Results were submitted by runners who filled out a race card with their finishing time. Yep. The race was basically run on the honors system, although Loncto had some help from Buffalo State to keep everyone honest.

“We got involved with the video department from Buffalo State and they came over with some high-end video cameras and recorded the finish,” Loncto said. “We’d spend days after the race, mostly me and Alice, in front of our TV, a 1995-quality TV with a VHS tape, reading bib numbers to verify race cards.”
Most of the mistakes were honest ones where runners used their watch time instead of the official clock. On occasion, they’d have to call someone to their house to find themselves on the tape and verify their result.

While the course hasn’t changed all that much and running is still running, the biggest change came when the company Computer Task Group set up a tent on the finish line in the late 1980s.

“They had made up their minds that rather than run the race and sit around with a cooler and some beers, they’d have a catered party. That was the first corporate hospitality tent that was ever set up at any Corporate Challenge anywhere. There were two or three tents the next year and by the early 1990s we had to try and control it.”

That’s right – the post-race party craze at the Corporate Challenge was invented, and perfected, in Buffalo. And to Loncto it’s not just because Western New Yorkers like a good party. It’s because they’re pretty competitive.

“In my opinion it became as much of a competition as the race,” Loncto said. “Companies would compete to see who could have the best tent, the best party inside the tent. As people moved from one company to another they’d say ‘Hey we did this. I think we can do more.’ It grew without us having to do a lot except to control it.”

That control got a bit easier last year when the event introduced a one-vendor hospitality system. But as the race continues to evolve with positive changes, Loncto decided it was time to step away from the organization.

Still, it remains one of the things he’s proudest of, including having the ability to hire cross-country athletes from the City of Buffalo Public Schools to help them buy shoes and travel to invitationals.
“There are three things I’ve done in my life that I’m exceptionally proud of,” Loncto said. “One was to marry Alice, one was to open Fleet Feet, and the other was that race.”