Peyton Manning made a memorable first impression when he went to the NFL Scouting Combine in 1998.

Manning walked into his scheduled interview with the Indianapolis Colts and demonstrated the fanatical preparation that would come to mark his great career.

"He sat down, opened up a briefcase and took out a legal pad and a pen," recalled Hall-of-Fame general manager Bill Polian in his book "The Game Plan." "On the first page of his notebook, he had about 25 questions he wanted to ask us."

When Manning left after 15 minutes, Polian recalls looking at his colleagues and saying: "He just interviewed us, didn't he?"

Meanwhile, the other quarterback the Colts were considering with the No. 1 pick – Ryan Leaf – blew off his scheduled meeting with Polian & Co.

The rest, of course, is history. Manning had a Hall-of-Fame career. Leaf is one of the great busts in draft history.

The Indianapolis incident is one famous example of why the NFL Scouting Combine matters.

How to watch the Combine
Breaking down the drills

Why do prospects run the 40-yard dash?

A total of 336 college prospects, along with hundreds of NFL coaches, scouts and executives, will converge on Indianapolis this week. The combine runs Tuesday through March 5, with on-field workouts starting Friday. It's the biggest single event in the run-up to the NFL Draft, to be held April 26-28.

Every on-field drill and workout at Lucas Oil Stadium will be televised live on the NFL Network. More than 6,000 fans will be given free tickets to watch the prospects run around in tight shirts and shorts.

Overblown? Without a doubt. But everyone involved acknowledges the combine still offers valuable information to NFL decision makers.

"It's really the verification and the confirmation of what you think you've seen during the fall season and during the all-star game schedule," said former Cleveland general manager Phil Savage, now the director of the Senior Bowl. "If you think a player's fast and he runs fast, you feel good about it. If you don't think a guy can run and he runs slow at the combine, then it sort of validates the reason you have him down the board a bit."

"The first and foremost benefit – and it doesn't get talked about much because it's not very exciting – is the medical examination," Savage said. "It's probably the No. 1 thing that can really derail a guy's draft status."

The medical is the most important of the four components of the combine.

Before the players step on the field or meet an NFL coach, they visit the Indiana University Health Methodist Hospital for an electrocardiogram. It's the first of a series of exams involving doctors from all 32 teams. It's the first time teams get a full medical review of prospects.

Are there any undisclosed major health issues? Teams need to know.

"If they did away with everything else but the medical tests, the combine would still be exceedingly valuable and worth the money we spend on it," Polian says.

Bills Hall-of-Famer Thurman Thomas is a famous case of a medical red flag at the combine, because he had a torn knee ligament that never was repaired. He dropped to the second round, where Buffalo took him with the 40th pick. 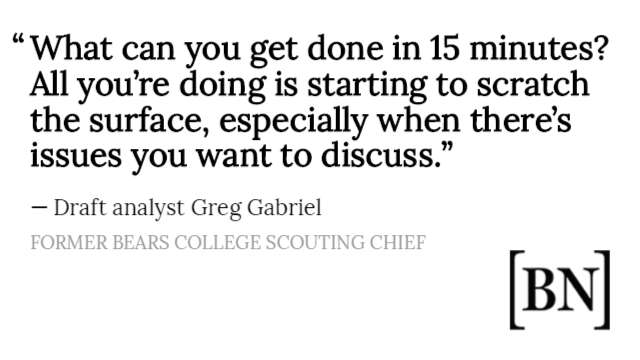 Every team is allowed to interview 60 prospects, at 15 minutes apiece, during combine week. Teams already have met many senior prospects during longer interview sessions at the Senior Bowl and the East-West Shrine Game. Teams also are allowed to bring in 30 prospects for visits to their NFL facilities before the draft. And some top prospects will hold private workouts at which teams can conduct interviews.

Given the speed-dating nature of the Indianapolis interviews, the session has limitations.

"What can you get done in 15 minutes?" says former Bears college scouting chief Greg Gabriel, now Pro Football Weekly's draft analyst. "All you're doing is starting to scratch the surface, especially when there's issues you want to discuss."

"If there's a young man who's an A-plus across the board, it's 15 minutes of an absolute coronation," Savage said. "We're all on the same page here, and this is a great young guy who we'd love to have on our team."

"If you have what you'd call the problem children," Savage says, "it might be a quick intro – kind of gauge where he is — and say look, we're going to have you back for one of our 30 visits but we wanted to make sure we met you here at the combine."

However, all teams are playing catch-up to some degree on the 123 underclassmen who declared early eligibility for the draft.

"In my experience, we really tried to steer those formal interviews – you get 60 of them – towards trying to get a feel for the juniors," Savage said. "We'd already had a good deal of exposure to the seniors. We'd seen them at the East-West Shrine Game and the Senior Bowl where you could get interviews knocked out. With the juniors just declaring in the middle of January, it truly could be the first time you have an exposure on a player from a personal standpoint. Our listing always leaned toward the underclassmen, especially ones we didn't have a very deep resume on."

As with any job interview, players make an impression in 15 minutes, and the teams take it seriously.

"Now is the time where the assistant coach takes over in those meetings," said former Bills coach Rex Ryan in Indianapolis two years ago. "Say there's 15 to 20 plays that the assistant coach is going to go over with those players. We're trying to get a grasp of their football intelligence. What they’ve been taught? What they remember about their schemes? You can tell a lot in those interviews."

Assistant coaches can maximize those sessions.

"There's a 15-minute time limit, and they blow a horn," Gabriel said. "But if you've got three coaches from three different teams sitting down with them, now that 15 turns into 45. Coaches, guys who know each other, get together and will get three or four coaches at a table." 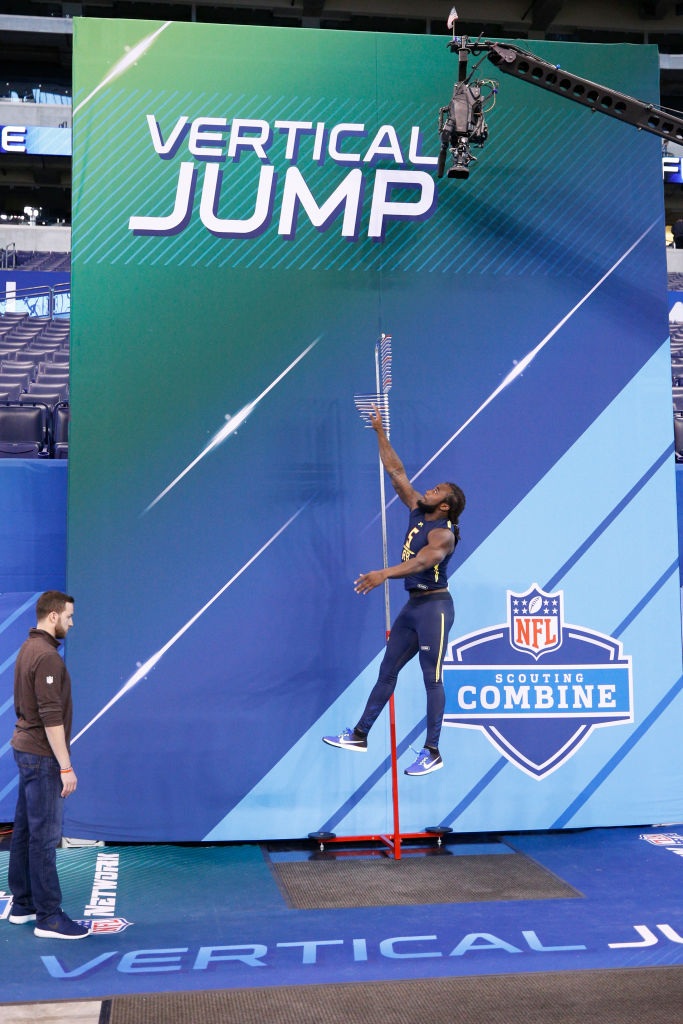 Each prospect is run through a series of seven measured drills: the 40-yard dash, the vertical jump, the broad jump, the bench press, the three-cone drill, the 20-yard shuttle and the 60-yard shuttle.

The NFL trash heap is filled with players who perform great in T-shirts and shorts but bad on the field. Still, if NFL scouts didn't think the tests had value, they wouldn't keep doing the drills. And they wouldn't ask the players to do them yet again at their on-campus pro-day workouts over the next six weeks.

"I think the biggest change and what you have to put into perspective is that all the drills have become learned drills," Gabriel said. "So these kids go to training schools for four to six weeks and they perfect the drills. So now are you getting a true test of his athleticism? Or are you getting a true test of how he learned to do the drill? That being said, it's the guy who has a bad drill who sets off a red flag, because what's he been doing the last four to six weeks?"

The vast majority of the time a player's speed and agility verify what scouts have seen during the college season.

Eagles offensive tackle Lane Johnson was viewed as a freak, 303-pound athlete in 2013. He proved it with a broad jump of 118 inches. By comparison Dallas star running back Ezekiel Elliott, at 225 pounds, broad-jumped 118 inches in 2015.

ESPN's Mel Kiper said the fact that teams compare players to each other makes the drills still relevant.

Breaking down the NFL Combine drills

Aaron Schobel was a top prospect coming out of Texas Christian in 2001. His 4.03 short-shuttle still is tied for third best among defensive linemen in the past 17 years. The Bills picked him 46th, and he had an outstanding career.

"Where it gets confusing is when you don't think a guy is very explosive and all of a sudden he shows up and tests great," Savage said. "Or the other situation where you think a guy really plays fast and then he doesn't test well at the combine. That's where it can get a little confusing and dicey to the staffs as they try to put their boards together."

After all the timing and measuring is done, players are run through a series of position-specific drills on the field. 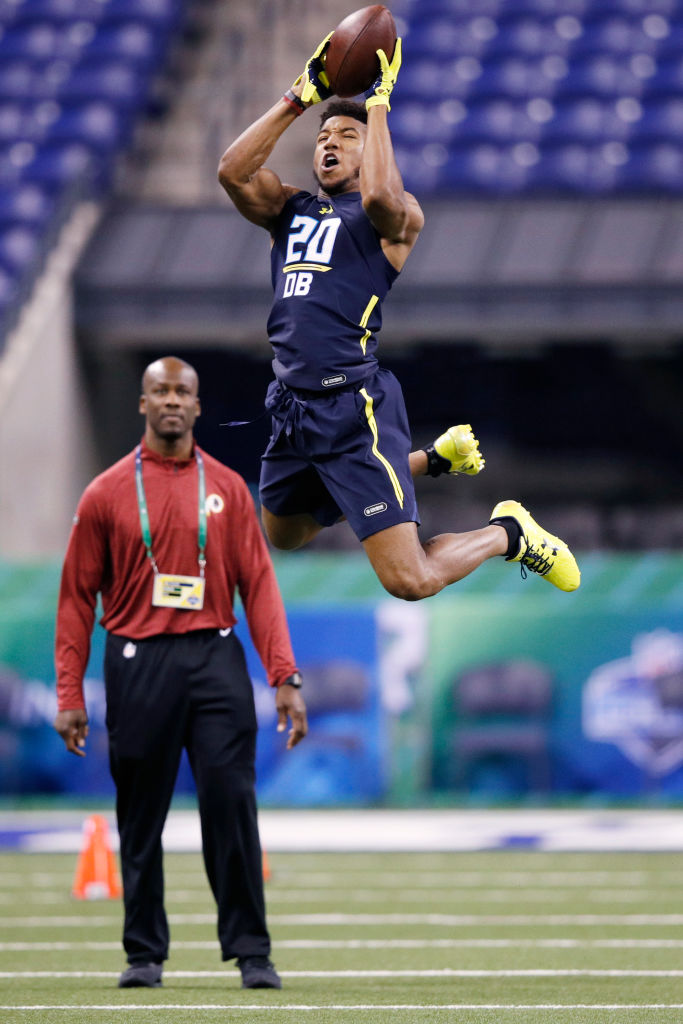 Defensive back Marlon Humphrey at the 2017 NFL Combine. (Getty Images)

Receivers and tight ends run a "gauntlet," in which they run across the width of the field and catch passes from five QBs, three on one side and two on the other. They have to pluck the ball out of the air, drop it and turn to catch the next pass.

Offensive linemen do a kick-slide drill in which they open up their stance at a 45-degree angle and kick-slide back against an on-rushing defensive en, punching with the hands against the defender. And so it goes at each position.

The general objective is to give scouts an direct comparison of body types and movement ability of players, one after the other.

"When I'm watching an offensive lineman in a game," Gabriel said, "first I want the end zone view and I'm looking at his stance. How does he look in his stance? Are his feet flat on the ground or is he up on his toes? Are his knees bowed out or straight? How does he come out of the stance? You add up all the little points to get the big picture."

Given all the information gathered, it is a giant picture.