When Mambrino King died in 1899, the East Aurora Advertiser hailed him as "the handsomest horse in the world." It was believed he was buried in a mahogany casket on Hamlin's Village Farm, a site which is now the lawn of a private home on North Willow Street in the Village of East Aurora.

The horse's reputation was the stuff of legend at a time when East Aurora was a horse-racing hot bed, said Aurora Town Historian Robert Goller.

"People would bring their horses to East Aurora and pay for breeding time" with Mambrino King, he said.

Dry goods magnate Cicero J. Hamlin had traveled to Kentucky to purchase the horse for $17,000, the equivalent of $389,500 today, said Goller. During the next 17 years Hamlin held Mambrino in highest regard.

"It was said that in his last days Hamlin would sit before a painting of his horse from Kentucky with tears streaming from his eyes," wrote Ken McCarr in "The Kentucky Harness Horse."

Mambrino King died 120 years ago, but his celebrity carries on today in East Aurora, spurred by the horse's streetside grave, a wine bistro that carries his name and the scores of residents who continue to make the village a destination for horsing enthusiasts. 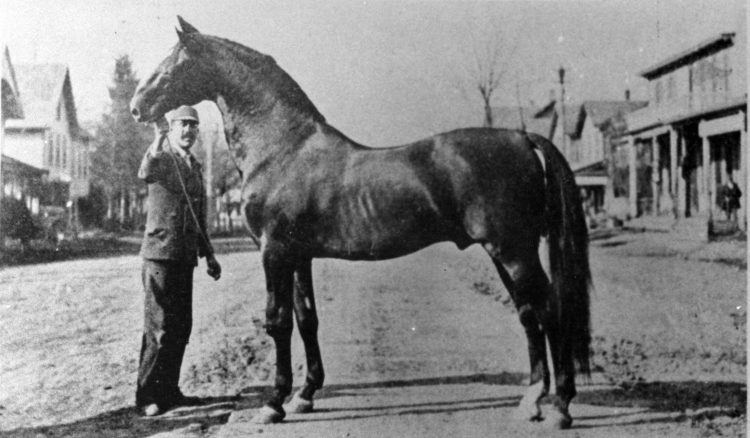 Mambrino King (circa 1890) towers over his handler on Main Street in the Village of East Aurora. (Aurora Historical Society)

In 1985, the Aurora Historical Society placed a marker on the property where Mambrino was buried. At the time, the property was owned by longtime businessman John "Jack" Dodge, who lived on North Willow with his family.

The exact location of the grave on the property was a mystery, said Dodge, who is now 84.

"It's supposed to be right there on the corner, but it could be to the right, or it could be 20 feet away," said Dodge.

In 2001, textile artist Sheila Petrocy Green moved to the North Willow home where she resides today. She believes the slope of the lawn indicates the likely resting place of the celebrity horse.

"There's a dip in the lawn about the size of a horse lying down," Green said. "We don't know exactly where the horse is buried, but maybe over the years the casket caved in and caused the ground to shift. None of this is fact, of course. It's all hearsay."

"Can you imagine building a casket for a horse?" Green asked. "The horse is clearly part of this town's history." 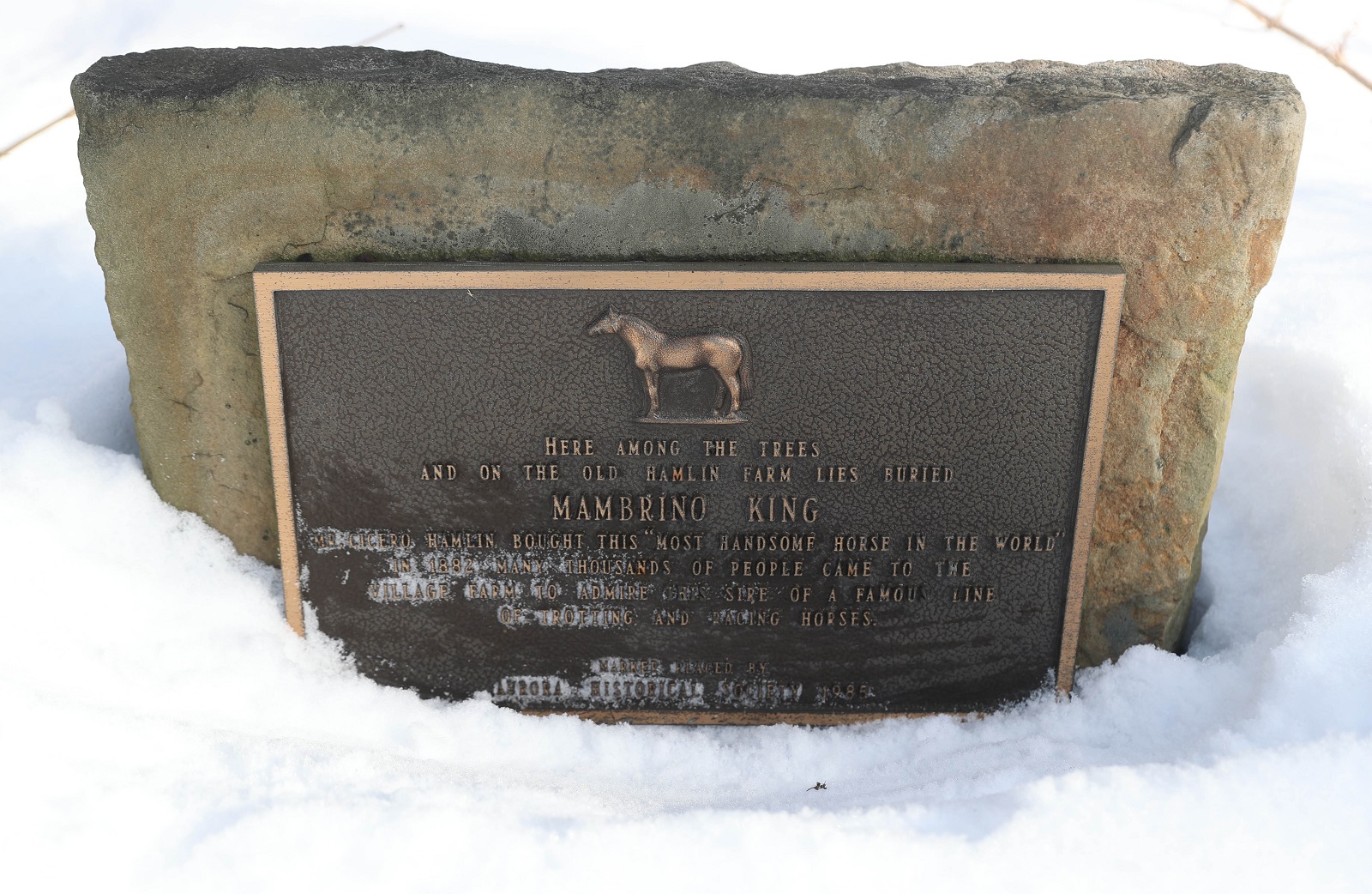 Horseracing took off in East Aurora during the late 1800s and early 1900s, said Goller. Its popularity was bolstered by two racing tracks built by two of the area's wealthiest residents — Hamlin and Henry C. Jewett.

Hamlin was born in New England and moved to Buffalo, where he built a home at 432 Franklin St. (today's Hamlin House). He made his fortune in dry-goods and manufactured glucose, but his passion was horses. 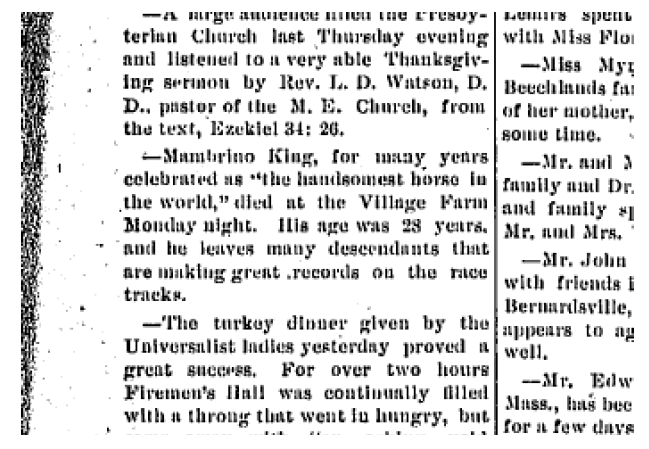 Hamlin may have owned a prized horse, but it was Jewett who built the better track, said Goller.

The Jewett Farm track was unique during its time, Goller said. It attracted people from throughout the country due to its completely enclosed design, which allowed training for horses year-round. Built at the southwest corner of Grover and Route 20A, the indoor track was dismantled in 1917, said Goller.

"It was never meant to be permanent. After it was taken down, the lumber and windows were sold to local residents," said Goller. "I had always heard that people bought parts of the track and incorporated it into their homes."

The two farms not only put East Aurora on the horseracing map, but they may also have played a role in attracting another East Aurora celebrity, Goller said.

"Elbert Hubbard came here for his love of horses," Goller said. "He owned horses. Because of these horse farms, perhaps he chose East Aurora for the Roycroft."

Carriage races filled the streets of East Aurora in July 1976 to help mark the village's sesquicentennial. The event continued each July through 2013, drawing hundreds of spectators to sulky races and the popular carriage parade.

"Think of it in terms of the last century, and you are out in the elements," said Liz O'Donnell, treasurer of the East Aurora Driving Society. "It looks traditional because the driver wears a contemporary suit, hat, gloves and driving apron. And he holds a whip in hand."

O'Donnell and her late husband, Mark, helped found the Driving Society in 1979 to promote the tradition of horse-drawn vehicles.

"The carriage races were fun," recalled Green of North Willow. "The first summer we lived here we had a party. The drivers would tip their hats when they passed our house in honor of Mambrino King."

The Driving Society continues today to sponsor clinics for drivers and trainers, and pleasure drives at the Chur Equestrian Center at Knox Farm State Park. The Driving Society also supports regional equine events such as Equifest, held March 26-27 at the Hamburg Fairgrounds.

"It's part of tradition," O'Donnell said. "We lost some of that over the years. People are not aware of the horsing tradition."

Drew and Anita Pfeiffer attribute the success of Mambrino King – their wine, chocolate and coffee bistro at 720 Main St. — to hard work and quality food and drink.

And a healthy dose of horse sense. 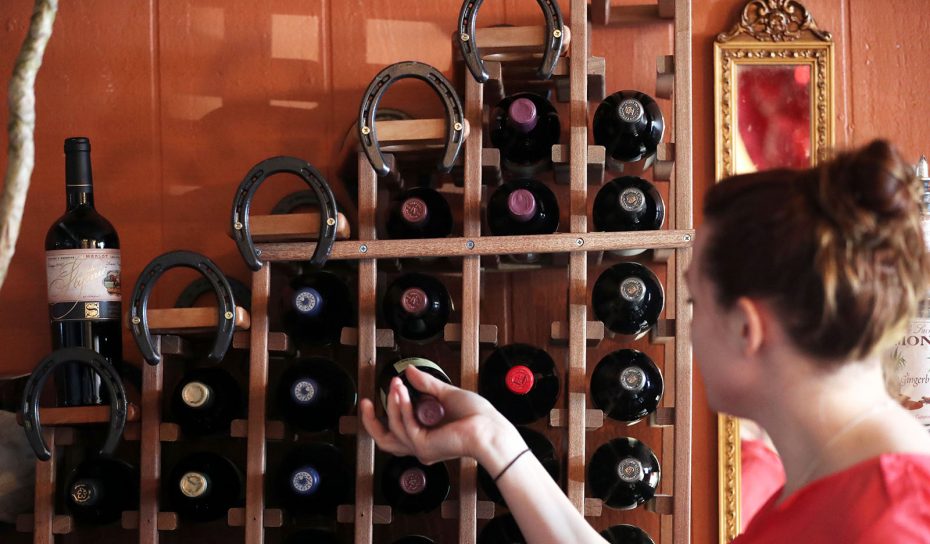 "People here still talk about the horse 120 years after he's gone," said Anita Pfeiffer. "Families came through from Pennsylvania looking to find out more about their ancestors, who were horse people."

Outside the wine bar, the first hint of the regal equine appears on a signboard over the entryway. Mambrino's presence continues inside where terra-cotta colored walls, cushioned seating and vintage photos give the bistro a homespun vibe. One photograph from the 1890s depicts the horse towering over its handler in the middle of Main Street, Mambrino's tail kissing the ground. A poster created by former town historian, the late Virginia Vidler, shows the layout of Village Farm, Mambrino's home. Subtle references to the bistro's namesake do not overwhelm, nor is there a menu item named Mambrino.

Interestingly, the Main Street location was not the Pfeiffers' first choice. They initially considered a former farrier shop on Oakwood Avenue.

"We were going to call it the Farrier, but we couldn't come to terms on the lease," said Anita Pfeiffer. "We wanted a place where people in the community could gather. We didn't think it would turn into a café."

But for East Aurora, a community that embraces and promotes the horse's past, a restaurant named for the famous resident who has been gone for more than 100 years seems like a perfect fit.

As Green put it: "The horse is clearly part of this town's history."