Ancestors of the shorebirds and the fish at Buffalo’s Outer Harbor would have known this place.

Before the big lake freighters, industry and pollution took over, the commercial slip near Wilkeson Pointe was a thriving marshy shoreline.

The site, which sits not far from the former Pier restaurant, could be returned to nature in as soon as five years, according to plans revealed this month by the U.S. Army Corps of Engineers.

The proposal includes using a series of stone breakwaters and dredged material from the Buffalo River to fill in the 23- to 28-foot-deep slip to much shallower depths.

The endeavor would become one of the first habitat restoration projects using river sediment that only five years ago was so toxic and chemical-laden that it was shipped to a confined facility near Lackawanna for permanent disposal.

The recent $200 million cleanup of the Buffalo River changed that.

The Corps of Engineers' first habitat restoration of this kind in Buffalo – and the Great Lakes – will happen later this year on Unity Island.

After that, sediment collected during the next Buffalo River dredging is planned to fill the slip near Wilkeson Pointe.

“It’s a big deal to have something like this constructed right in our backyard,” said Eric Hannes, a biologist at the Corps of Engineers.

Reusing dredged material for beneficial uses isn’t a new practice – so long as the fill is clean. The Corps of Engineers has done projects along the coast of the Gulf of Mexico using dredged sediment from tributaries there.

The Corps of Engineers estimates it could take 160,000 cubic yards or more dredged fill – the equivalent of about 50 Olympic sized swimming pools – to fill the Buffalo slip.

Once that's done, roughly 5.5 acres of natural shoreline habitat and wetland would be created in those shallows.

-- shorebirds stopping over for rest and food.

“Ultimately, we think it’s going to be a great place,” said Steven Ranalli, the vice president of waterfront development at the Erie Canal Harbor Development Corp. 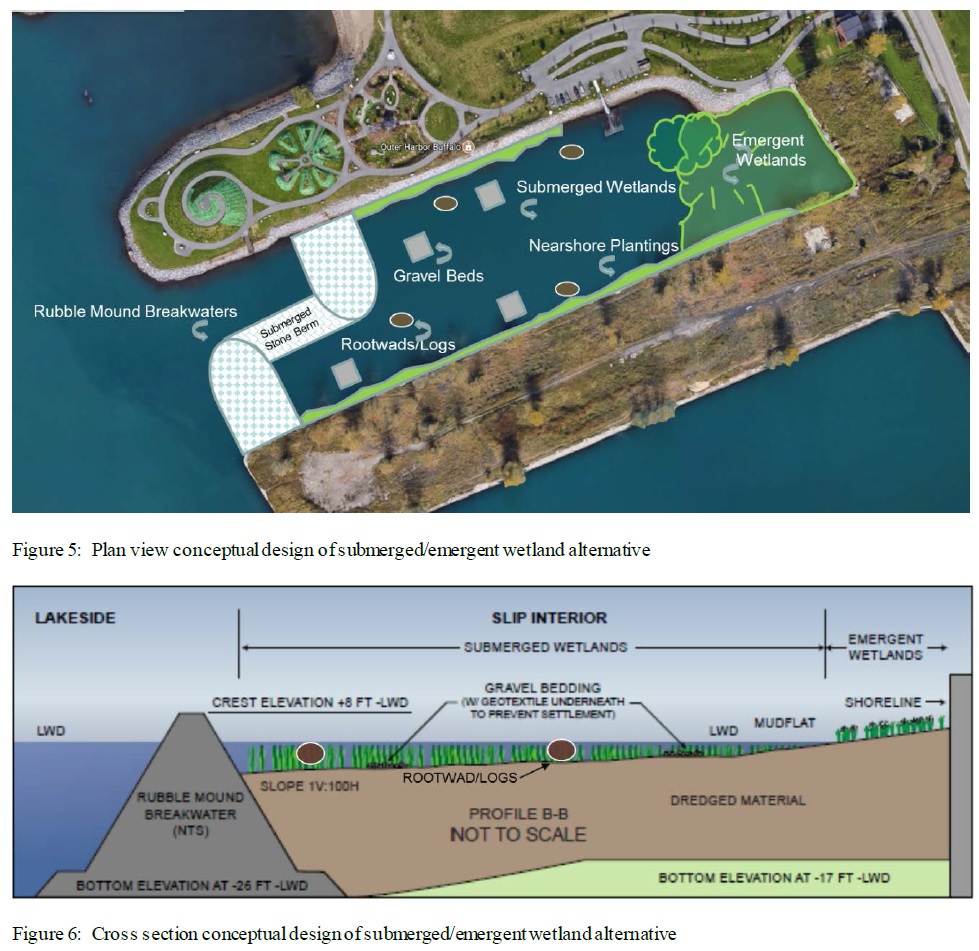 “This is really unique: to create a slip that was built for Great Lakes freighters and to create an ecological playground on the waterfront,” said Kerrie Gallo, deputy executive director of Buffalo Niagara Waterkeeper. “It’s definitely a step in the right direction.” 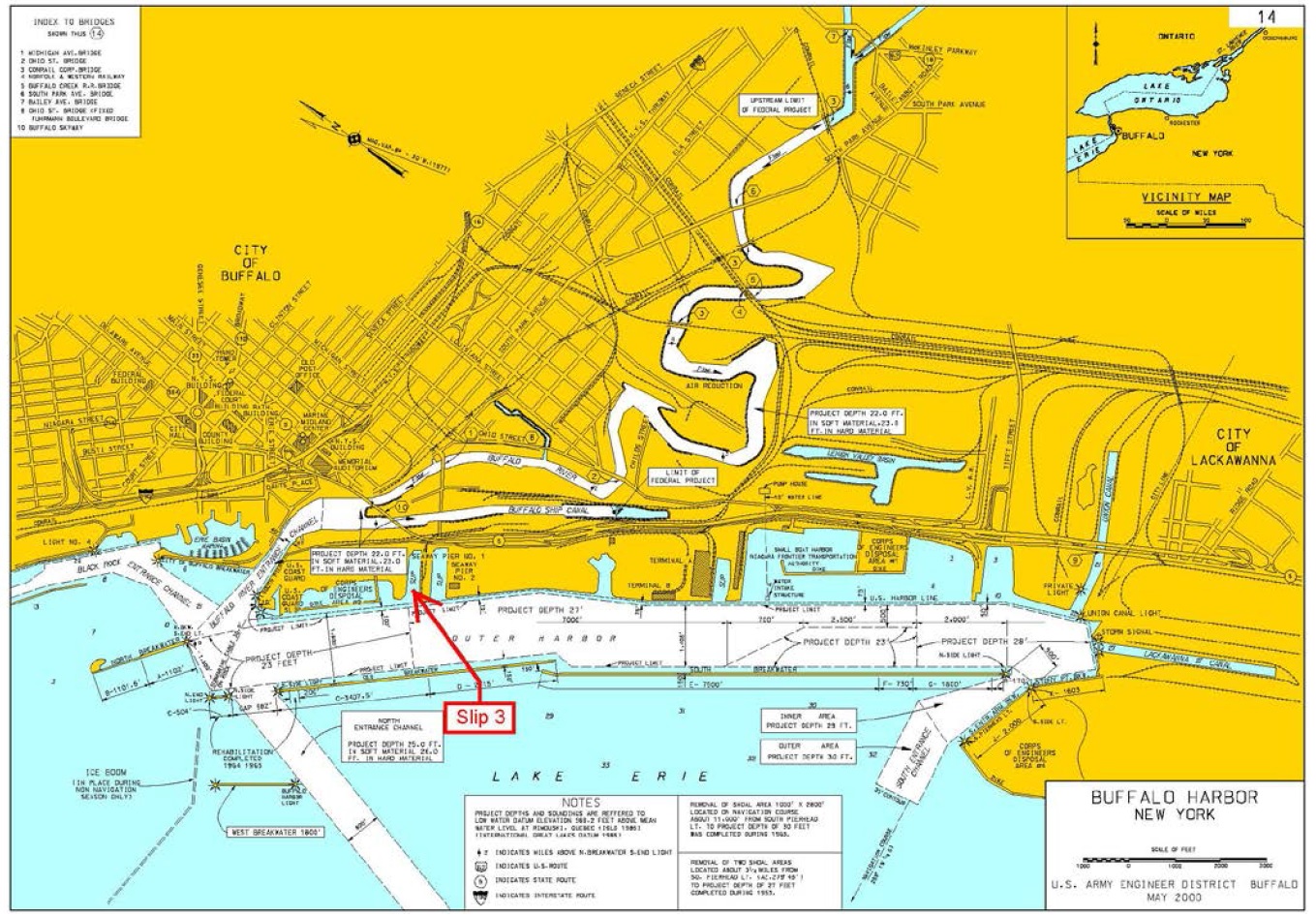 Gallo said the configuration and depths of the site make it hard to support much life or ecological function now.

Putting back a little bit of what was lost over the last century, and improving shoreline habitat, will bring environmental benefits as well as recreational and economic opportunities, according to Jay Burney of the nearby Friends of Times Beach organization.

“This is a very important project and it has the capacity to be a great project on Buffalo’s Outer Harbor,” Burney said. “This project will provide very important habitat for many species of fish, migrating birds and pollinators.”

Advocates said muskellunge, a sought-after sportfish whose popluations have dwindled, could benefit from the proposed project at the outer harbor slip.

Land and water birds that use the Buffalo Harbor and the Niagara River corridor as a stop-over during their annual migrations could also get a big boost from the habitat enhancements. The Niagara River is considered by the National Audubon Society to be a globally important bird area.

What’s more, officials said the proposal is another piece in the larger goal of revitalizing Buffalo’s waterfront for nature and recreation.

“This really gives us a chance to invest in that aquatic restoration,” Ranalli said. “It’s a win for everybody."

"When this project is complete, this is a place where people will go.”

A pair of rounded rubble breakwaters staggered near the entrance to the slip will help keep fierce waves out of the shallow wetland and the sediment in it.

“We’ve got to protect it,” said Richard Whipple, a plan formulator for the Corps of Engineers.

A submerged berm, running parallel to the slip, would connect the breakwaters but still allow for small boats, kayaks and canoes – and fish – to get into and out of the wetland.

On top of the fill placed by the Corps of Engineers will be a bedding of gravel. That will enhance habitat for fish spawning and nesting, planners said.

Rootwads and logs would also be installed along with submerged natural vegetation inside the newly-created shallow cove. Both features could provide shelter for fish.

“It’s just a beautiful area out there,” Whipple said. “Instead of just having grass and riprap everywhere, why not put some nice features in there...and create a wetland that was there a long time ago that’s been gone?”

The details were included by the Corps of Engineers in a scoping document released this month for public review.

One possible alternative proposes developing an acre of the 5.5-acre site into an emergent wetland and a mudflat area nearest Fuhrmann Boulevard.

That could “further diversify the project area and would provide suitable habitat to a number of wading birds and songbirds,” the Corps of Engineers said in its public scoping document.

Officials acknowledged, the benefits of creating an acre of out-of-water wetland may be impacted by the proliferation of invasive plants like phragmites and cattails and could require further study.

The Corps of Engineers said the public, organizations, advocates and other federal and state agencies can provide their input through March 5.

“If they’ve got a better idea, it’s all stuff we want to consider at this point,” Hannes said.