Lancaster throwers Jon and Natalia Surdej are in very different frames of mind when it comes time to compete.

Jon, a junior, doesn’t stress much. He called the Section VI track and field championships “just a warmup meet getting ready for the state meet next week. If I do good, I do good. If I don’t, I don’t.”

His best shot put landed at 58 feet, 2 inches. It wasn’t a personal best, but it was good enough to book a return trip to states.

Jon’s younger sister, Natalia, a freshman, gets nervous. But she’s alright with that, and it didn’t seem to get to her at all Friday afternoon. Her first toss in the weight throw went 51-1.5, which beat her own New York State freshman record of 49-11.5.

“I was really nervous at the beginning, but I use my nerves to throw,” Natalia said at Houghton College’s Kerr-Pegula Field House. “Emotion creates energy, and that’s what I did.”

The siblings are both headed to next Saturday’s NYSPHSAA Championships at Ocean Breeze Athletic Complex on Staten Island next Saturday for a second year in a row. But instead of cheering Jon on from the stands like the last time, Natalia will be competing right alongside her older bother as a sectional champion.

“I expect to win. That’s the bottom line,” Lancaster coach George Rak said. “Jon is ranked No. 1 in New York State and we expect him to win the shot put. Natalia is ranked No. 2 currently in the weight throw and anything can happen. The girl that’s in front of her broke the sophomore state record, and Natalia’s broken the freshman state records, so you’ve got two of the best-ever throwers for their age group going against each other one-two.”

Jon finished fifth in 2017 with a distance of 53-11.75 and was the only thrower in the top eight who wasn’t a senior. His best this season was a 58-9 at the Section VI Team Championships two weeks ago. 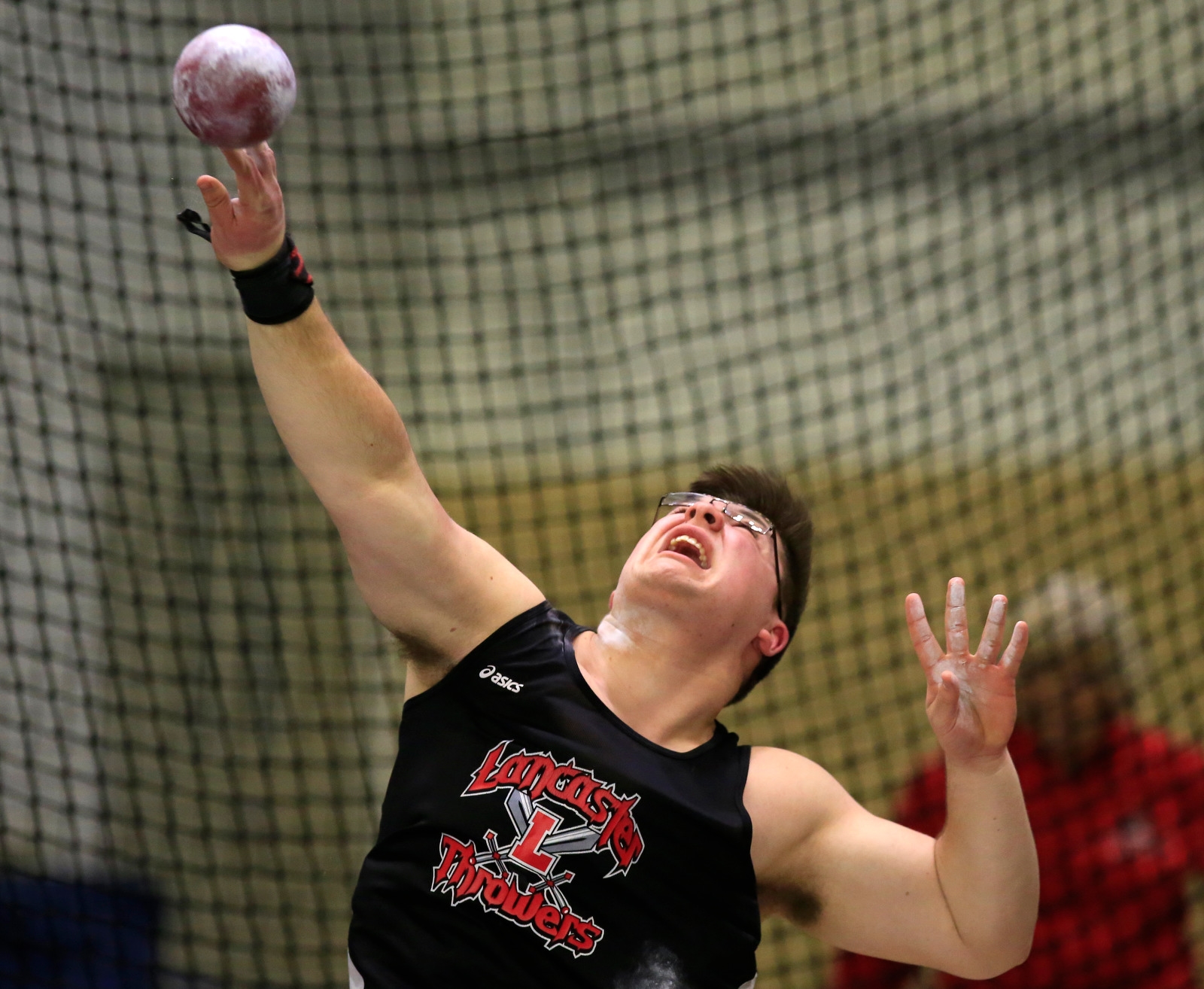 Natalia is following in the footsteps of a long line of standouts who have made their way through Lancaster’s program.

“She’s awesome. I got her into this two years ago and I don’t know why,” laughed Jon. “She’s always striving to beat me. She’s always working harder than me, trying to work harder than me – doesn’t always happen – but it’s good because when she took her 51-foot throw today I was the first one out to greet her. Of course she did walk past me, but it’s good because we’re siblings and we’re always there to help each other.”

“She had a great meet,” Blue Devils coach Mike Panepinto said. “She had her best time in the hurdles all year. It came down to her final jump in the long and she nailed a nice jump. Even with her legs not feeling 100 percent, she found a way to win. That’s what a champion is.”

In Panepinto’s 20 years with West’s outdoor program and seven years indoor, he can’t recall a boy or girl at the school who has won three individual events at sectionals. He added that Wende plans to compete in all of them at states next weekend.

“She’s done two, so she knows what that feels like,” Panepinto said. “I did ask her and she wants to do all three. She’s earned that right, and if she wants to do it then absolutely.”

This year’s championships were a bit of deja vu for Orchard Park junior Jenna Crean. The standout sprinter won the 55, 300 and erased a Lancaster lead on the final leg of the 4x200 relay, all for the second straight year. The Legends’ relay did still qualify for states. Tapestry’s 4x200 relay had the best shot at winning the school’s first indoor sectional title, but it was disqualified during the preliminary round for stepping out of the lane.

Lockport freshman Sydney Nowicki was the final double-winner on the girls side with first-place finishes in the 1,500 and 3,000 after coming into those races seeded second and third, respectively.

On the boys side, a pair of standout performances sandwiched an unfortunate misstep by Sweet Home’s Nathaniel Davis.

The senior first broke the Section VI record in the long jump on his final attempt with a leap of 23-8.25. The previous record was 23-8 by Amherst’s Jailyn Twitty in 2012.

Minutes later, Davis was called for a false start in the 300. He was the overwhelming favorite going in, having set the sectional record at the Dr. Sander Invitational in New York City nearly a month ago.

“I was bummed out like any person would be but I had just jumped a 23-8 previously, like right beforehand in the long jump, so I couldn’t get too mad at myself there,” Davis said. “A lot of people came up to me from my team, other teams, parents – there was a lot of support.”

The added rest turned out to be a blessing in disguise for Sweet Home’s 4x200 relay team of Anthony Williams, Eric Johnson, Thomas Rivera and Davis. The Panthers were neck-and-neck with Hutch-Tech up until Davis took the baton for the final lap and pulled away for the win.

“It for sure helped me in the last run. Since I didn’t run that 300, I was going to put everything I had out in the 4x2,” Davis said. “I just wanted Tommy to get the baton around and run what I normally do. Just do the best I can and hopefully come out with first.” 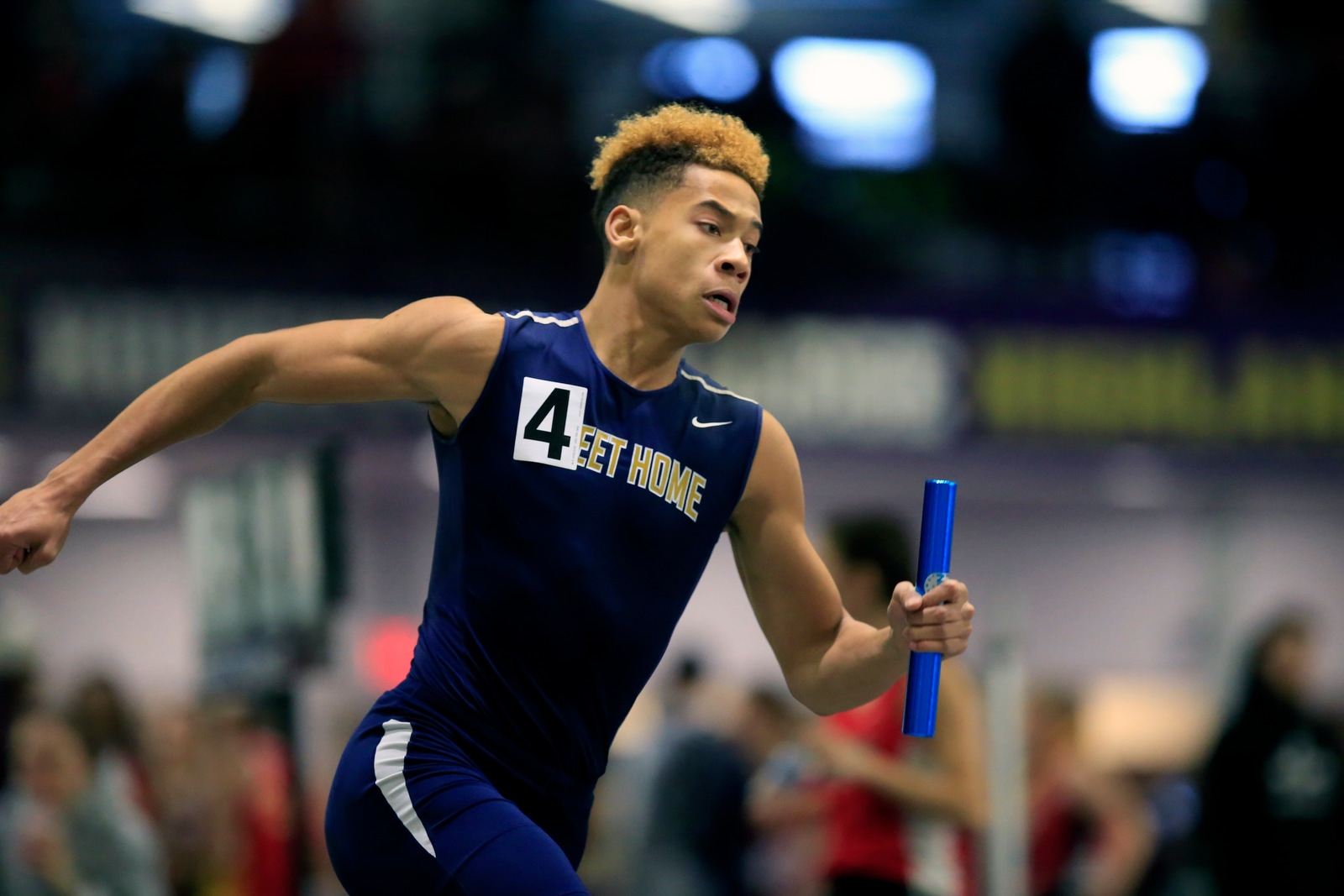 Davis’ disqualification opened the door in the 300 for Lancaster junior Elijah Kerner, who beat out Johnson, last year’s sectional champ, by .04 seconds for first place.

The only double-winner on the boys side was Orchard Park senior Cal Puskar in the 1,000 and 1,600. He made up a considerable amount of ground during the last lap of the 1,600 to beat Sweet Home’s Ray Sambrotto by half a second.

The closest finish of the meet was in the boys 55 hurdles. Hutch-Tech junior Aaron Jones ran a 8.11 to beat out Cheektowaga senior Andrew Reichert by .004 seconds for first place. Reichert ended up winning the pole vault with a height of 12-6.

Cheektowaga may have finished second to Lancaster in the 4x400 relay, but the majority of the post-race excitement came from the Warriors because their relay shaved nearly seven seconds off their previous-best time to qualify for states by .02 seconds.