For more than 45 years, Dennis Penman has been a fixture in Buffalo's real estate community, primarily in housing development.

The Western New York native focused his efforts on building up residential development projects, affordable housing and single-family homes in Buffalo and its suburbs, particularly through M.J. Peterson Corp. That's where he spent most of his more than 40-year career.

Much of his work centered around low- and moderate-income housing development, including in the inner city, where he led M.J. Peterson's development of the Pratt-Willert and Ellicott houses. He also expanded into urban revitalization and broader economic development through his volunteer work with the Buffalo Urban Development Corp. agency and Erie County Industrial Development Agency.

He also led the company's higher-end work, including its involvement with the city's first waterfront housing efforts that created Rivermist at Waterfront Village more than 30 years ago.

Six years ago, he left M.J. Peterson to join up with Paul Ciminelli at Ciminelli Real Estate Corp., where he was tasked with both staff development and expanding the firm's expertise beyond commercial office space to include the multifamily projects that are now in vogue. That led to projects such as Bethune Lofts, Sinclair Lofts and most recently The Mentholatum, as well as the firm's plans for 134 single-family homes at Muir Woods in Amherst.

Now, he's moving out on his own, forming his own firm that will focus on economic development, neighborhood revitalization and affordable housing – both new construction and rehabs. He's already teamed up with a longtime partner, John McClutchy of JHM Group in Darien, Conn. Together, they've submitted a bid to the city to convert the former School 78 on Olympic Avenue into affordable apartments, but they're waiting for the city to make its decision.

Q: How did you get into the real estate business?

A: My uncle and my father were in the lumber business and delivered all the lumber to M.J. Peterson for all the houses they built postwar in the Tonawandas. The families became close. My cousin, Donna married Lee Peterson, and we all kind of grew up together around the business.

After college, Victor Peterson invited me to work for the company and basically said, "I'll give you less money than anybody else wants to offer you, no company cars and less benefits, but a huge opportunity if you want to be entrepreneurial and work in that environment." The rest is history. I bought into it with Victor. He was a real estate mentor to me for 40 years. We did some exciting things together.

Q: So after 40 years, you decided to leave Peterson and join up with Ciminelli?

A: Paul and I were friends. We had a couple of investments together, and it was an opportunity for me to do something with a different footprint to it, which was to help him work towards building a more robust development team, and then work on some bigger projects like Conventus at the Buffalo Niagara Medical Campus, which kind of fit in with some of the other things I was doing in the community.

Q: And now you left Ciminelli?

A: The plan always was for me to be with Paul for five years. I stayed six based on the momentum that we had on certain projects that had to be completed. But it was always my intent at this stage in life to do some things that were important to me.

I wanted to refocus on urban revitalization, economic development in the community and to really get back to the affordable housing footprint that I had worked in for many years, and to adjust my schedule accordingly so I had a little more flexibility and time to devote to those things, not just in the context of core profit part of it, but also to participate in some of the volunteer things that go along with that to support it.

And also, I have a second home in Charleston, S.C., that I've had for 10 years, and I'd like to do some things in the Charleston marketplace and have the flexibility to go back and forth to do both.

A: I have a new company. It's called Penman Development Partners. It's my intention to bring together people I've worked with successfully over the last 45 years on specific projects.

Our focus is going to be in that affordable, mixed-income type of housing ... There's a significant amount of affordable housing out there that's 15 to 30 years old. A lot of it's out of the compliance period. And the trend in the country is a lot of that goes back to market-rate, because the neighborhood comes up around it. Our intention is to seek out properties like that and rehabilitate them and continue to keep them in the affordable program.

Q: What do you think of the changes in Buffalo?

A: It's interesting, because it's incremental, so it's not a big gestalt for me. But when I step back or fly in or you've been away for a week or two, and you really look at the changes, it really is fairly dramatic.

And it's not just physical, but contextual in terms of government and collaborations that didn't exist in the past that are now working to begin building the future. We've pushed really hard as a community to get to the space we're in.

Q: Would you have envisioned this 10 years ago?

A: I'm a glass-half-full guy, so I always anticipated something that would be better than what we had. Would I have seen it play out exactly the way it has? Probably not. 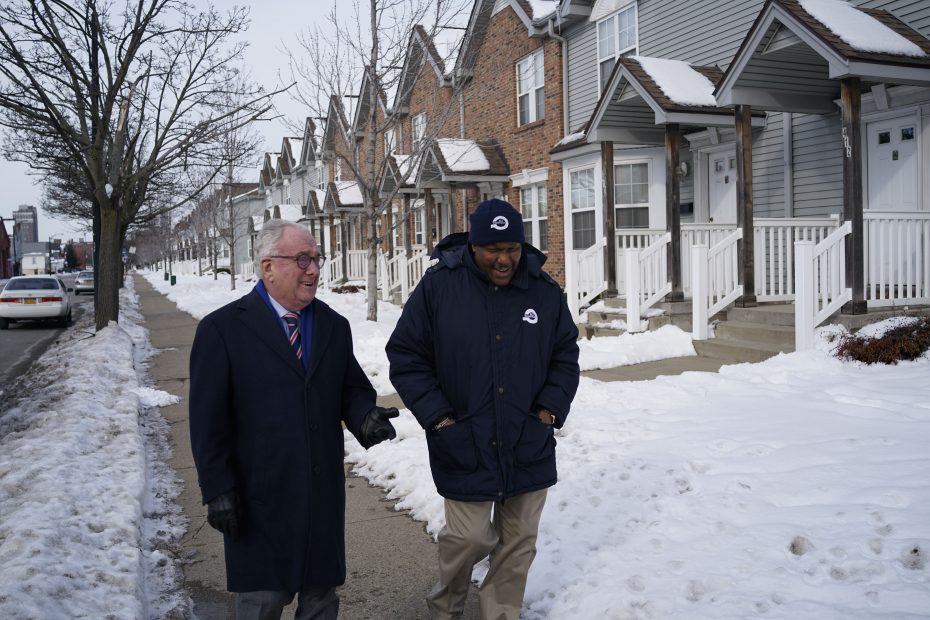 Q: What does it mean to have new players in the market now?

A: You hit on a very critical thing. It's the turn of the next generation now to step up to the plate, to really take advantage of this momentum.

If you're 40 years old in Buffalo today, you can own a city, and there's not many places you can go and say that, because you have a canvas you can build on for the next 30 years that will accommodate some more creative and exciting projects. The snow has been plowed and you can drive down that road.

So the engagement of a younger profile of people who are totally committed to the community is really one of the more exciting parts of it to me.

To have people come in from outside the community because now they see the value in it is also is accretive to the future. It brings additional momentum and additional investment to the region. And again, it comes with a collaborative spirit and engagement from government to allow that to happen.

Q: What about the role of government in what has happened?

A: I think it's totally critical in terms of what has transpired.

The population of people who work in government now are professionals. They're not somebody's cousin or uncle or sister who got a job from a political appointment. They're now qualified people who really are professionally trained in the spaces they work in. And they brought in a huge dynamic to be a business partner with the development community, to cause things to happen.

I see more of a bipartisan focus on the bigger picture. There's still the party bickering and that type of thing and that will inherently always go. But more and more, there's more of a focus on what are the goals for the community, and without regard to what party you're with, how do you achieve those goals. And you can't do that by being against things.

Q: What opportunities do you see for the region?

A: Building on what's happened at the Buffalo Niagara Medical Campus is critical. I think that is a huge opportunity moving forward, and not just in the context of what's there. It's what spins off from there.

I've been very lucky the past couple of years to work with the people at Albany Molecular Research and also the people at Athenex at the highest level ... Some have come from Europe, some from San Diego, but they're all mutually happy with living here with their quality of life. And that gets out. That's a national phenomenon that's happening.

The other thing is we're looking at transition. We have a terrific labor force here that's been in the automotive space for a long time. Those folks, in that training and that culture, when you open up a Panasonic-Tesla facility, even though we still haven't seen the value of that, that is the future. Nano and high-value manufacturing is going to be a space that is going to be important for us, and we have that rich legacy of that type of labor that is going to make those companies successful.

We have a real opportunity in this community, because we have a lot of people that are underemployed that can be brought up and plugged into those new manufacturing spaces.

Q: What are the risks?

A: The risks are that we don't get complacent. It's like putting a fire in your fireplace in January. You build it up, and you start the fire going, but you've got to keep putting logs on it.