GANGNEUNG, South Korea – It happens every four years. The United States and Canada play for Olympic gold in women’s hockey, and the game usually goes down to the wire.

This one did that and more. Jocelyne Lamoureux-Davidson scored the game-winning goal in a shootout on Thursday to give the United States a 3-2 victory against Canada, the four-time defending Olympic champions.

Down a goal with seven minutes to play, the United States got an equalizer from Lamoureux-Davidson’s sister, Monique Lamoureux-Morando, and matched Canada through overtime, even staving off a power play through the last 95 seconds.

Then it was on to a shootout, which also went into overtime, with both teams netting two of their first five chances. Under Olympic rules for the gold medal game, it came down to sudden death.

Lamoureux-Davidson scored first against Canada goaltender Genevieve Lacasse. A minute later, U.S. goaltender Maddie Rooney stopped a shot by Meghan Agosta of Canada to give the American women their first gold medal since 1998, when women’s hockey debuted as an Olympic sport.

Rooney said that before the shot she looked over at the bench and saw her teammates pointing to indicate she needed just one more save, against Agosta.

“To have their support made it a whole lot easier,” said Rooney, 20, who is at her first Olympics. “I just reacted to her, and then everything kind of went into a blur.”

Four years ago at the Sochi Games, Canada beat the United States in overtime, 3-2, to win gold. The scene at the end of these Olympic tournaments has almost always been the same: the Canadian women throwing sticks and gloves across the ice in celebration, while their American opponents wipe away tears, beginning the four-year countdown until their next shot at the sport’s biggest prize.

But their roles were reversed this time as Rooney turned Agosta away, and American sticks and gloves went airborne.

The win was especially poignant for this group of American women. A year ago, they battled USA Hockey for better pay and work conditions, including by threatening to boycott a world championship tournament last year. Only a last-minute settlement that included hefty pay raises got them back onto the ice. The Lamoureux sisters were two of the leaders of that fight.

This year’s gold medal game had it all – lead changes, slick passing, game-saving goaltending, a healthy dose of contact and a raucous crowd that traded dueling chants of “Canada” and “USA” all afternoon. 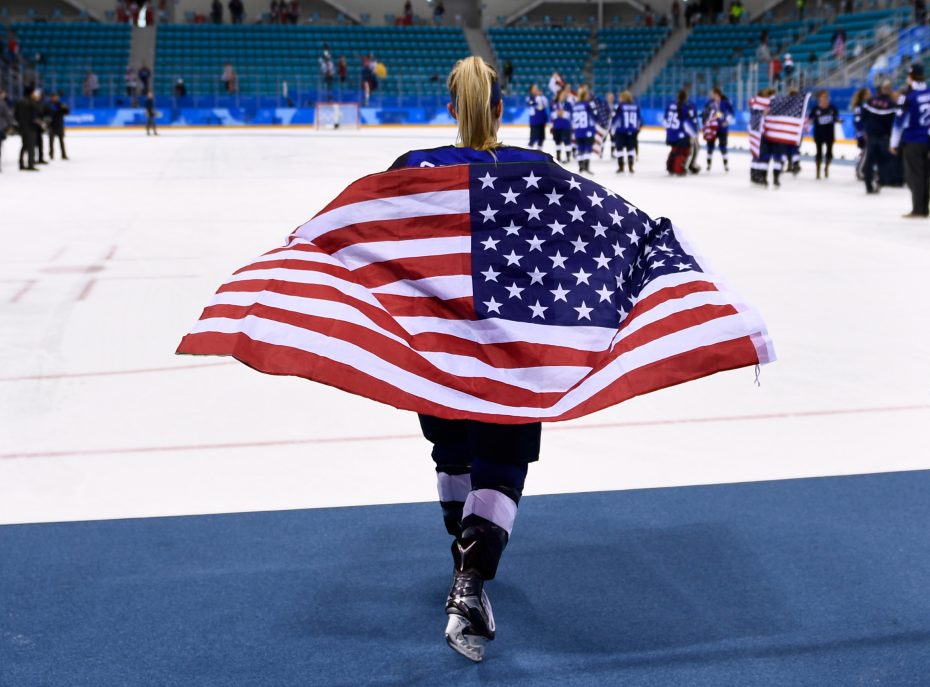 Western New York native Emily Pfalzer is draped in the U.S. flag after the U.S. women were awarded the gold medal after the women's ice hockey event during the Pyeongchang 2018 Winter Olympic Games at the Gangneung Hockey Centre on Feb. 22, 2018. (Brendan Smialowski/AFP/Getty Images)

“This is a very classic example of how hard it should be,” said Robb Stauber, the U.S. women’s coach.

Canada’s women played a classic Canadian-style game, using their skill and physicality to bully the Americans around the ice, raising their elbows and even a fist or two.

In one instance, as the Americans battled for an equalizing goal with 16 minutes left, forward Brianna Decker was trying to get on the other end of a centering pass when she took a fist to the face from Marie-Philip Poulin, captain of the Canadian team, and crumpled to the ice. No penalty was called.

“I’ll have a good scar, but it’s a pretty good one to have,” Decker said after the game.

Forward Hilary Knight put the United States on the scoreboard first, deflecting a shot by her teammate Sidney Morin past Lacasse with 25 seconds to play in the first period. Knight’s power-play goal came during the third man-advantage of the night for the Americans, but the lead didn’t last for long.

Two minutes into the second period, Blayre Turnbull of Canada beat a lunging Lee Stecklein of the United States down the right boards and threw the puck in front of the net. Just as the puck got there, so did Turnbull’s teammate Haley Irwin, who redirected it past Rooney to tie the score.

Five minutes later, the Canadians took the lead as Agosta grabbed a loose puck near the blue line, skated deep into the U.S. zone and found Poulin for an open chance. Poulin didn’t waste it, beating Rooney with a bullet into the upper shelf of the net.

The Americans have tried to bring a new style to the ice in these Olympic Games, focusing on puck possession, creativity and slashing attacks through the seams in the opposing team’s defense.

While it worked against everyone else here, and even produced a world championship last year, Canada looked for much of the afternoon as if it had figured out a very effective answer to it – muscle.

From the drop of the puck Thursday afternoon, the Canadian women banged hard against the Americans. They had five penalties during the game – for illegal hits, interference and slashing, among other things – compared with three for the United States.

When Knight, Dani Cameranesi and other slick-skating Americans tried to burst into open spaces, Canada’s big defenders like Jocelyne Larocque were there to bump them off their stride.

By the end of the second period, the Canadians had won the style battle, baiting the Americans to join them in the scrum.

It worked until overtime, when each team uses only four skaters at a time, the ice opens up and speed takes over. That figured to favor the United States, which had wanted to play this way all along.

The Americans controlled play in overtime, though Kacey Bellamy, Cameranesi and Megan Keller missed chances at the doorstep of the net.
In the shootout, Knight had a chance to win it on the last shot of the first round, but Lacasse stopped her with a pad save. Then it was up to Lamoureux-Davidson, who pulled the puck from backhand to forehand and slipped it past Lacasse.

“I’ve seen her make that move plenty of times,” Lamoureux-Morando said of her sister. “We’ve played this game in our minds a thousand times and won it every which way.”

With a save needed to win it, Rooney delivered, and the Americans had the gold.

“I’m digging the new necklace,” Lamoureux-Davidson said after the game, with her medal around her neck. “Don’t think I’m going to take it off for quite a while.”