Visual art and music share these as prime creative concerns. It made sense, then, when News Arts Critic Colin Dabkowski and yours truly hatched the grand plan to attend "Matisse and the Art of Jazz" at the Albright-Knox together, we'd riff off of each other in real time and perhaps shine some light on the 20 colorful, evocative, circus-themed, war-informed works that Henri Matisse unveiled in book form in 1947 beneath the title "Jazz."

We were off to, as I said later in the day, "hang out and babble profusely in the presence of profoundly great art." When we got back to the office, we interviewed each other about what we'd seen and felt. Here is how it went:

Colin Dabkowski: Jeff, as a musician and someone who has spent a lot of time writing about music, have you thought at all about the connection between visual art and music?

Jeff Miers: I have, pretty much from the beginning of my painfully earnest attempts at becoming a pretentious teenager, ha ha! I've always been interested in synesthesia, or more specifically, the way we can "hear colors" and "see sound." Joni Mitchell, for example, is said to have told the musicians she worked with, "Play a bit more of a mellow blue here, and this section should be azure," and so forth. It's not at all surprising, then, that Joni is a serious painter.

I've always experienced music in this manner, and the same is true with visual art.  When I'm moved by a piece of art, I hear harmonies in my head.

CD: That's amazing to me. I sometimes catch myself looking at art and music in isolation, more the way a scientist would approach a topic than an artist. That's why it's fascinating to look at someone like Matisse, who saw no such distinctions, or at least totally disregarded them. Thanks, Henri.

JM: That was definitely the initial appeal to me with Matisse. Particularly "Jazz," because I feel that it consciously blurred the perceived lines between art forms, but it did so subtly, by implying the connection between improvisation in visual art and improvisation in music. Or extemporization on a theme, or a collection of themes.

With "Jazz," you get the sense of the man cutting the paper and assembling it into something that previously existed only in his mind. It's visceral, in that way. Think of Charlie Parker or John Coltrane approaching music in the same way. In this case, the thematic material -- the color palette, if that isn't too pretentious -- is a set of chord changes, and the improvisation over those chord changes is what Frank Zappa used to call "air-sculpture."

Matisse and the Art of Jazz

More about the exhibition: Henri Matisse crafted the images that comprise "Jazz" while enduring a prolonged convalescence that encompassed most of the 1940s, and ultimately lasted until his death in 1954. The images marked a decisive move away from oil painting and embraced the collage and cut-out methodology the artist would favor during his last decade. Beyond the title Matisse chose for the collection, there is an innate musicality in Matisse's designs, one noted by the Art Gallery of New South Wales, which claimed the work "evokes the idea of a musical structure of rhythm and repetition, expressed through the handwritten text, which is broken by the explosive improvisations of the color plates."

CD: The thing that struck me the most about the "Jazz" series was his use of a predetermined "vocabulary" of symbols. He repeats those throughout the entire series, and actually across his whole career, and if you know what you're looking for, you can spot them. It's the same way an avid listener can spot a Clifford Brown lick from a mile away. They're ingredients in the whole, and they can be rearranged in infinite permutations. 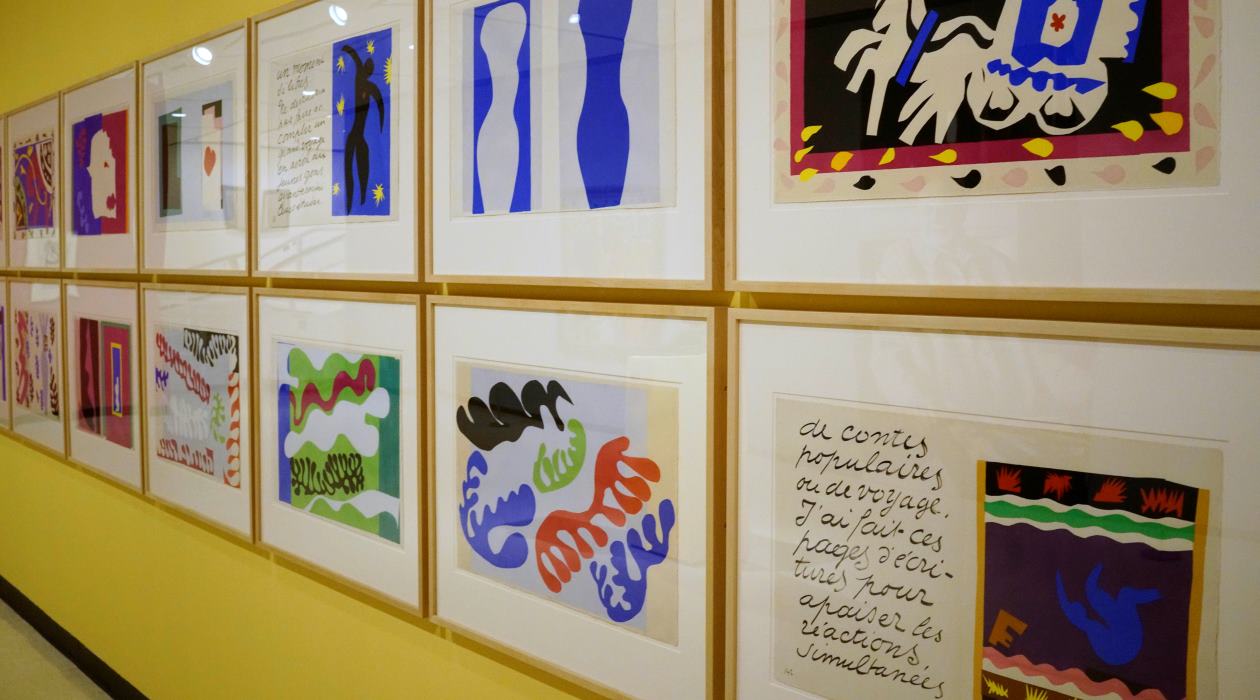 The "Matisse and the Art of Jazz" exhibition at the Albright-Knox includes 20 colorful, evocative, circus-themed, war-informed works. (Derek Gee/Buffalo News)

JM: Yes. In jazz -- or in any music, really, but for the purposes of our chat here, jazz specifically -- there are certain lines, scales, turnarounds, licks, riffs and so forth, that everyone uses, though the best players always make them sound like they own them, by adding their own twist to the tale. That feels like a parallel to what Matisse did with "Jazz," and also, the Joan Miro and Norman Lewis pieces we looked at together.

You said something that stuck with me, in regard to all of this. "Constraint equals freedom." I love that concept. Absolute freedom devoid of any fencing, framework, constrictions -- this would look and sound like a complete mess. There is the sense that the most incisive abstract art and the most incisive improvisation-based music has earned the right to be abstract, by doing the work that is necessary to develop technique. There's no shortcut. You've just gotta do the work. If you don’t, it will be obvious. Thoughts?

CD: That's the paradox. Here's what Matisse wrote in "Jazz": "In art, truth begins when one no longer understands what one is doing, what one knows, and until there remains in you an energy all the stronger because it is constrained, compressed and repressed."

Why is it that rules and parameters free up an artist to create his or her most original work? In Matisse's case, though he apparently hated how "Jazz" came out, the constraints -- his physical limitations and the scissors and paper he was forced to use while bedridden -- paved the way for some of his purest and most highly regarded work. It applies to every art form -- theater, poetry, dance, music. Not journalism, though. Journalists should be given total freedom to do whatever they want, right?

JM: Ha ha, yes. For a free press to live up to its mandate, journalists must have total freedom. (Crickets.) My experience of music bears your theory out. In my case, as a self-taught musician who'd lost most of the hearing in one hear at a young age, the limitations were thrust upon me from the outside. It was an uphill battle to become a proficient musician. I did an awful lot of things that a music educator or a schooled musician would consider "wrong." The limitations made me want it all the more, however. Out of that struggle came something flawed but unique. Mine, for good or ill.

Matisse was not in good shape -- he was dying, essentially -- when he created "Jazz." He couldn't move much, so obviously, he couldn't paint in his former method. Out of those limitations and his apparently unquenchable desire to create came this new method, this new approach, this new work. I always see any artistic creation as a form of raging against the dying of the light, because I'm Irish, melodramatic, and quite likely delusional. Whatever, I'll own it. In "Jazz," this is what I feel Matisse is doing, in part.

Also, Stevie Wonder. That is all. 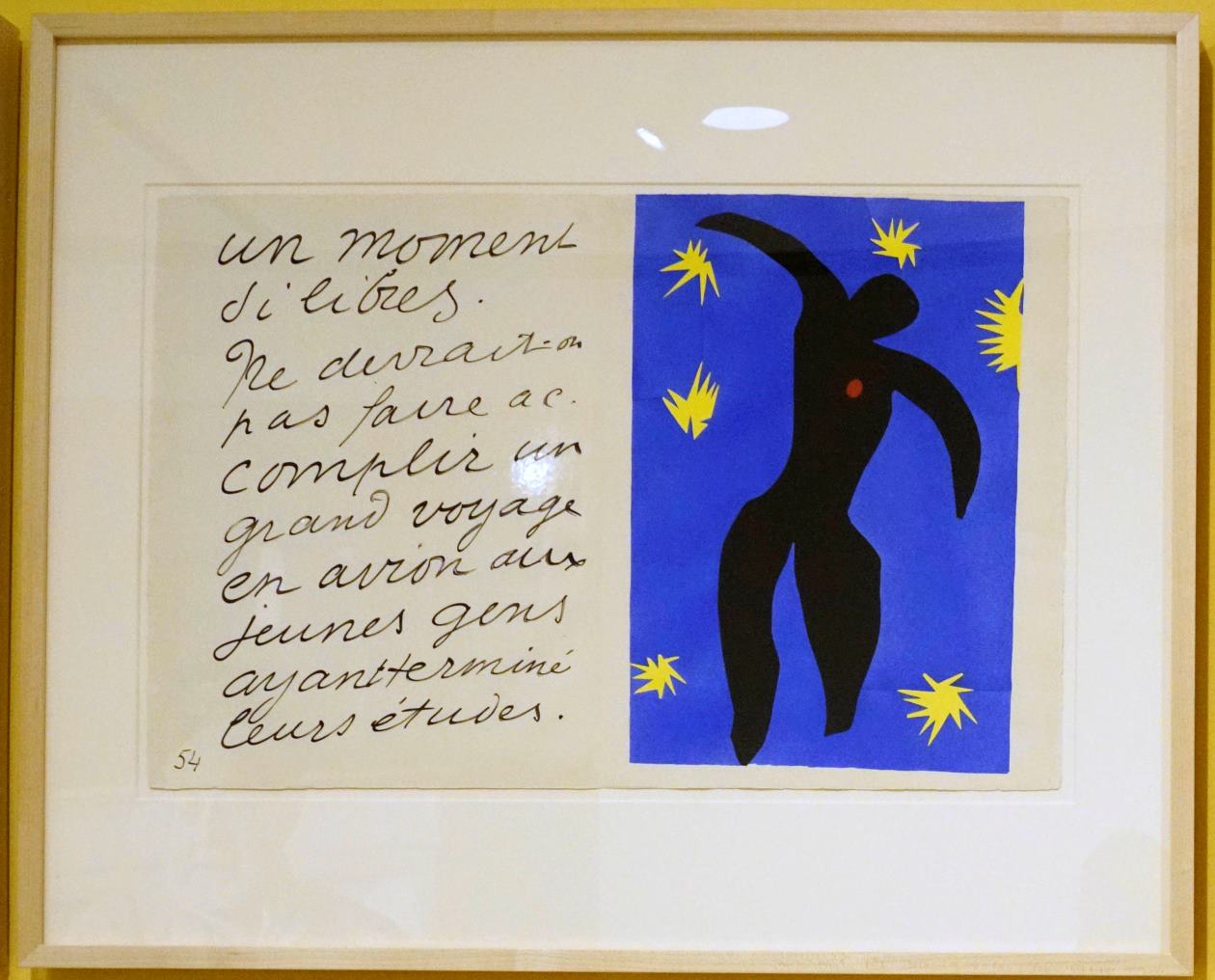 CD: Stevie's existence makes that argument better than either of us blowhards can. I am also Irish, melodramatic and totally delusional, but I saw many of the panels in "Jazz" as uplifting, whether or not they were intended to be that way.

That was even true with the famous "Icarus" panel, which shows a black figure falling through a sky of exploding shells, which I saw as a figure rising through the stars to his true potential. Even if he was falling, I don't think it was toward something terrible, but toward what Matisse called in the book, "our modest, pedestrian condition," where we can remember, "the splendor of the sun, and the perception of limitless space in which we felt, for a moment, so free." A little grandiose, sure, but that was the sense I got.

JM: It was so interesting to me that we stood side by side looking at the same piece of art, and I saw, "Icarus falling from the sky, shot through the heart, a victim of his own dreams and a world that wanted only to place weights around his ankles and bind him to the earth," or some such twaddle, while you saw the image of a spirit being elevated -- or a phoenix rising? And all along I thought I was the optimist and you the pessimist! Ha.

CD: Well, you were technically right. That is actually Icarus, mid-descent. (Serves me right for not reading the text in advance.) But to me this is one of the main appeals of abstract art, that it can evoke thoughts and emotions the artist had no intention of evoking. It creates a space for you to have reaction, rather than preaching something to you. It's the same way certain pieces of music mean completely different things to different listeners. In some ways that seems like a cop-out, because then art or music doesn't have to mean anything. But -- back to paradoxes -- I think the stronger an abstract artist's concept is and the better it's executed, the more possibilities it offers to the viewer.

JM: This is surely a big part of what makes art of any variety resonate with us. Our relationship with it is personal. What the artist was actually intending is almost beside the point. 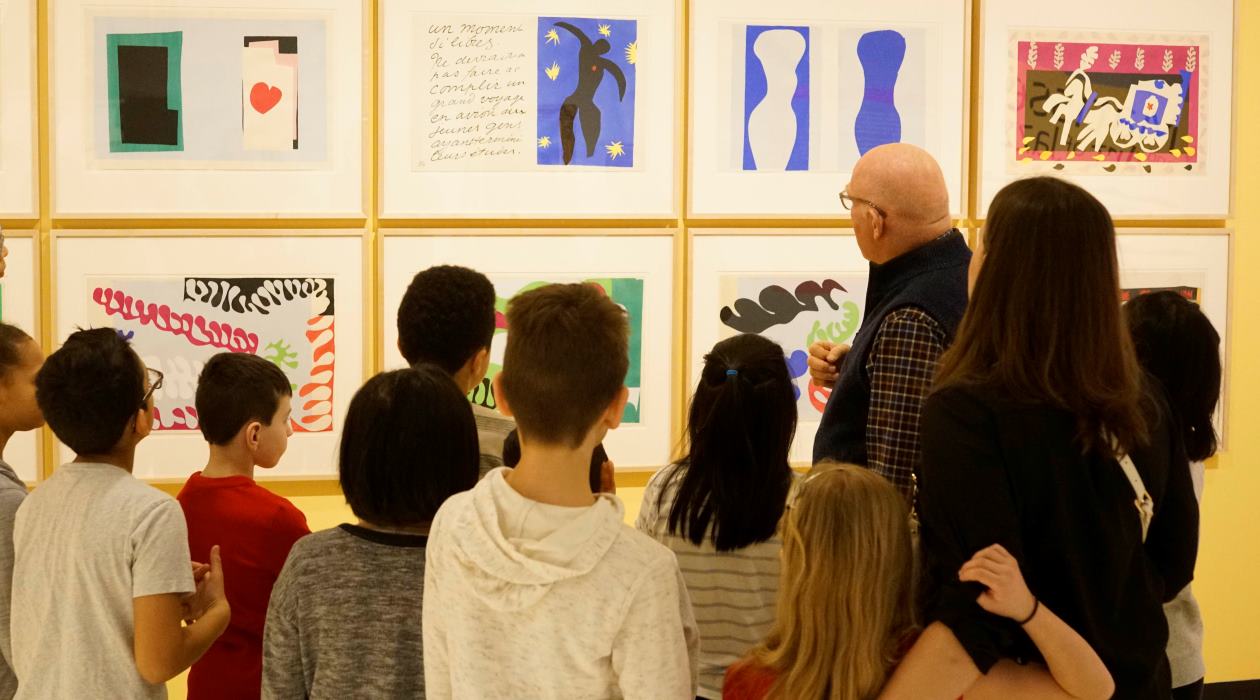 A school group discusses the "Matisse and the Art of Jazz" exhibition. (Derek Gee/Buffalo News)