Shelley Looney woke up Thursday morning feeling groggy and sounding like she had finished chugging a 12-pack of gravel. She was working on little sleep after tossing and turning before finally drifting off after 3:30 a.m., knowing the U.S. women's hockey team beat Canada for the gold medal in the Olympics.

Twenty years after she scored the winning goal that lifted the Americans over Canada for gold in Nagano, Looney and her teammates from the 1998 team reunited via cellphones Wednesday before the gold-medal game in Gangneung, South Korea. Three hours later, Looney was going, well, loony while watching the game.

No wonder why she was so hoarse.

"Just sitting on my couch by myself yelling at the TV," she said Thursday with a laugh. "I was watching it by myself at 2 in the morning. It was an amazing game. We had a text group going on the whole game. Even A.J. Mleczko, who was doing the color commentary, would jump in between periods."

Looney and her former teammates had their fingers into overdrive while texting before the game, and crossed during the game, while pulling for the Americans from afar and pulling together once again. They were excited but nervous, knowing the firepower Canada unleashed while winning gold in four straight Olympics.

Plus, the Canadians had beaten the U.S., 2-1, in the preliminary round. But the Americans had won three straight world championships. But there was their agonizing loss four years ago in Sochi. And they were down a goal with seven minutes remaining in the third period. Wait, Monique Lamoureoux just scored to tie the game.

Overtime seemed appropriate for both teams considering how closely the game had been contested. It was bonus hockey for fans inside the building and people like Looney back home as the Americans killed a penalty for the final 1:35 of overtime, as the clock ticked past 2 a.m. in Buffalo.

Still, it came down to a shootout, a coin flip. In a perfect world, with a gold medal at stake, overtime would have continued until someone scored. Take it up with the International Olympic Committee. Say what you will about shootouts, but they cranked up the drama going into the wee hours.

Both teams scored twice on five shots in the first round. Jocelyne Lamoureux was inserted for the second round. If she shared something with Looney back in '98, it was that neither was expected to be placed in that situation. Looney scored on the power play while playing out of position on a different unit.

Did you see the goal Wednesday night – actually, Thursday morning?

"Finish!!!" Gretchen Ulion-Silverman, who scored the first goal for the Americans in '98, texted to the group.

Lamoureaux faked right, made a subtle move toward her backhand and pulled the puck back to her forehand, leaving Canadian goalie Shannon Szabados leaning in the wrong direction and pleading for mercy, and finding the open side. Maddie Rooney stopped Meghan Agosta with a pad save to seal the win for the United States.

For Looney, the hardest part was watching. The Brownstown, Mich., native has been living in Buffalo for the past four years while serving as director of hockey for the Bisons youth organization. She was the first coach of the Beauts. She has coached the past two years at Nichols School. Last year, she coached in the World University Games. 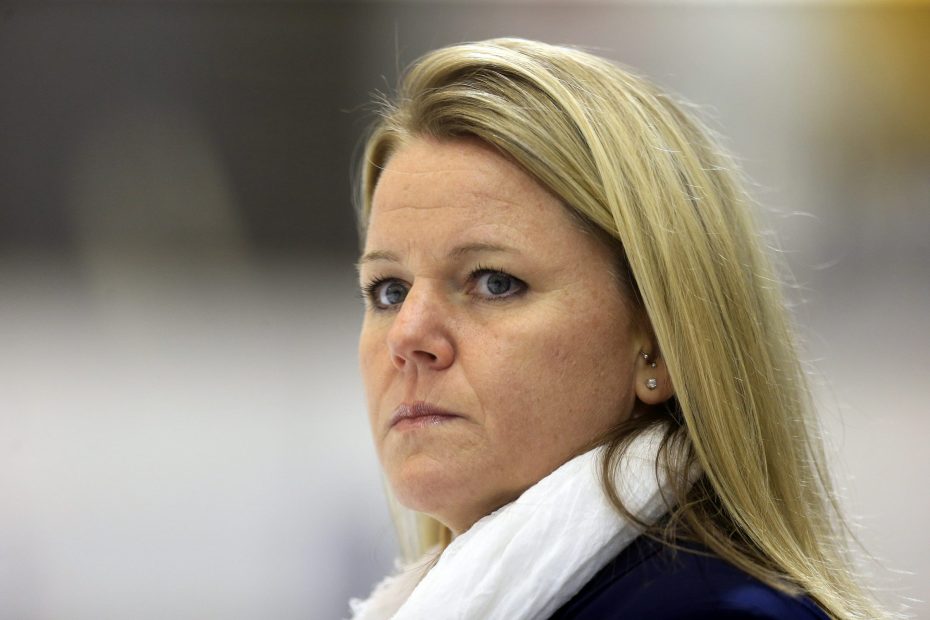 As any player would attest – or any parent or coach, for that matter – it's always easier to participate while knowing you can make an impact rather than watching without having any control over the outcome. Most players are so caught up in the action that they don't fully digest the pressure of the moment until later.

"You don't think about it when you're playing," Looney said. "You're in auto-mode. It's a job that you have been preparing for. You could tell that's what these girls had done for their entire life, before they knew they would be on the Olympic team. It was a beautiful moment for them."

It was a beautiful moment for Looney and her former teammates, too. The game sent them on a trip down Memory Lane to a time when they showed up with less talent than the Canadians but more competitive spirit and just the right chemistry. It doesn't happen often, which is why it's special when it does.

The 2018 team will be linked the way the '98 team has been for the past 20 years and counting, like the 1980 U.S. team that celebrated the Miracle on Ice on the same date 38 years earlier. Nothing in sports is better than a team coming together and winning the whole thing on a big stage.

Looney may have been screaming at the television from her couch, but her heart was halfway around the world with another generation of women. When the tears of joy began streaming down their cheeks, they began streaming down Looney's cheeks, as they often do when she speaks about the 1998 team.

Twenty years from now, members of the 2018 team will understand.

"You can't help it when you see the emotions on these athletes' faces, not just the women's ice hockey team," Looney said. "You personally know what they've been through and the grind to get where they are. It hits you hard. I know because I've been there, too."