“The past is always present,” the narrator says in the opening of the harrowing play “The Auction Block.”

The challenge is reaching those who’d prefer not to believe that pithy summation of history’s lingering impact.

The conclusion was hard to escape for anyone attending last weekend’s performances of the short but affecting play in which a slave family having Sunday dinner recalls the destruction of the black family on the auction block just before them. They recount the brutality as it’s re-enacted on stage beside them, with the father already killed and young brothers torn apart from their older brother and mother as she wails in anguish beneath the lash of the auctioneer’s whip.

The intact family that conservatives love to hold up as model? African-Americans never had a chance. And as this month’s Olympic events make clear, once you start out too far behind, it’s almost impossible to catch up.

Hence America’s wealth gap that sees white families with a median net worth 10 times greater than that of black families, according to a Federal Reserve 2017 analysis, giving them much greater ability to finance businesses and college educations, buy homes and pass it all down to their children.

That didn’t happen by accident.

The miracle is that blacks in America have achieved as much as they have after overcoming as much as they have. It’s a lesson many patrons who participated in the “talk back” after the play’s performance wanted young blacks to learn because it is taught inadequately, if at all, in the schools.

“I wanted them to know where they came from,” Lavonne Johnson said later, explaining why it was important to bring her 13- and 17-year-old sons.

The scene, more arresting than any TV depiction, had the requisite effect on the older son, Jalen.

“That was something I never, ever saw before,” he said, before putting it in perspective for his classmates who think getting an education is an ordeal. “You think you have it hard ... (until) you see the stuff other people have gone through.” 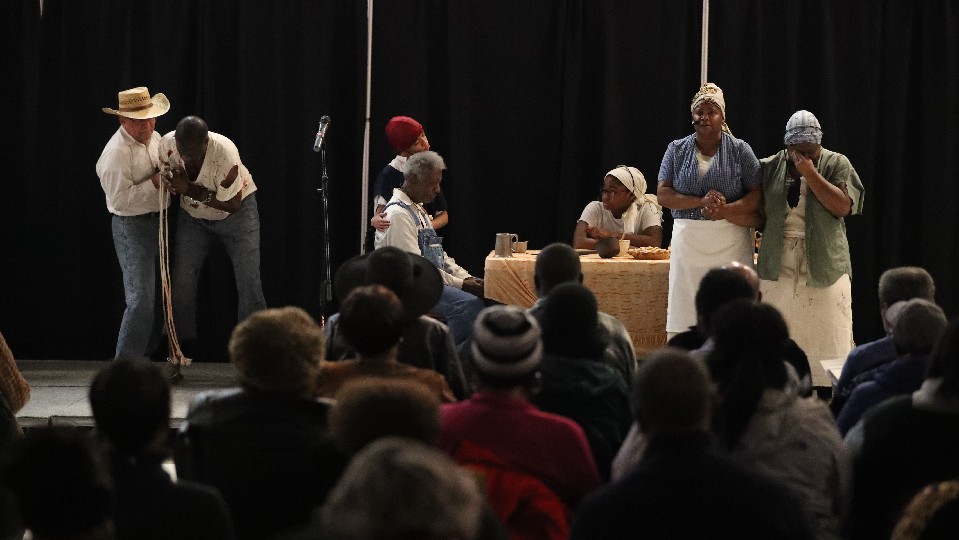 Slaves having Sunday dinner recall seeing the family before them torn apart and auctioned off as that scene is replayed on stage beside them in “The Auction Block” at Mount Olive Baptist Church. (Sharon Cantillon/Buffalo News)

Local playwright Marie Hall Mullen’s depiction, presented in Mount Olive Baptist Church by its Theater Ministry, was obviously important for African-Americans to see. That’s particularly true when gangbangers have as little regard for black life as slave owners did.

“If those kids had been here when they were little, they would respect life more now,” Mullen said in explaining what she hopes young people take from the play.

But as important as the Black History Month presentation was for African-Americans, what’s really needed is white history month for that segment of the population that still doesn’t recognize the role that the past – from slavery to Jim Crow to redlining to New Deal and GI Bill advantages targeted to whites – played in creating today’s structural inequities.

A start would be taking a scene like “The Auction Block” to a more diverse venue than an East Side church. Mullen tried that, but said a performance at Erie Community College’s City Campus the night before was sparsely attended.

A more direct means would be having Mount Olive partner with white churches. Mullen is open to that, but said she may start that outreach with a summer production of a “Tom Thumb Wedding,” a fundraiser in which in which children engage in faux marriage ceremonies.

She’s probably right to start with something more innocuous to establish a rapport. Delving into racism and its legacy is fraught with pitfalls when so many think the Civil Rights Era and putting blacks in some prominent positions solved everything.

But at some point, we need that discussion, and it needs to be across racial lines. Politicians have failed miserably, as the current racial climate and resurgence of hate groups attests. But maybe art like “The Auction Block” can spark the dialogue our political leaders can’t bring themselves to lead.