While 1977 is famous in these parts because of a certain blizzard, it was also one of those rare years a Yale Cup team failed to win a Section VI boys basketball title.

So too was last year.

In fact 2017 was the first time since '77 a Yale Cup team didn't get to hoist a championship plaque at the conclusion of the tournament.

Can any of the 15 Yale Cup teams in this year's tournament get into the postseason winner's circle and start a new streak for the Buffalo Public Schools league?

Still the tournament is a gauntlet in every classification, especially the two Class B brackets, which have nine of the Yale Cup representatives.

What does local basketball guru and Buffalo News basketball pollster Chad Andrews of The View From Centercourt website think about the Yale Cup's chances?

It will be fun finding out the answer as the playoffs continue in Western New York for the Section VI and Monsignor Martin teams.

Once again, it's time to break down the Section VI and Manhattan Cup tournaments with an assist from Andrews.

Contenders: No. 2 Lockport, No. 3 Williamsville North

Top quarterfinal: No. 5 Clarence at No. 4 Jamestown

Potential sleeper: No. 6 Lancaster suffered two close losses to Williamsville North – its quarterfinal foe. However, the Legends have made it to at least a Championship Week semifinal game three straight years. It's also, in theory, tough for one team to beat the same foe thrice in one season.

Prep Talk: The Wolverines of Niagara Falls look to make it three straight championships. In a class where it appears the Niagara Frontier League champions have slightly more in the cupboard (balanced scoring, height, speed) than the rest of AA field, is there anyone that can prevent Falls from advancing to Far West Regionals? Is there any team that can thwart a Falls-Lockport final, for that matter?

Chad Andrews: "I think the two teams that match up the best to do that are the two and three seeds. Lockport has familiarity with playing them twice. And North is a big, physical team that could try to make Falls play their game. Those are the kind of games and all of the sudden you're in the third quarter and everyone starts believing.

I think the potential Williamsville North-Lockport semifinal is going to be a war. I would definitely not count the Spartans out and with their size and the way they defend, you could argue they matchup as the favorite.

PT: Guard play could be the key in that one and could that be the 'X' factor for the Lions?

CA: Devon Darrell is the kind of guard who can hurt you in a couple different ways. He always seems to make an impact. He can score for them and he's such a good facilitator.

Top quarterfinal: No. 6 McKinley/No. 11 Kenmore East at No. 3 Sweet Home

Prep Talk: The elephant in the room. West Seneca West is the only unbeaten team in the field. The Indians earned the No. 1 seed by winning a division featuring mostly Class AA teams. Can they get to the final?

Chad Andrews: I think they will.

PT: I too think they will because of their guard play with Juston Johnson running the point. He has taken over games when necessary to will his team to victory, including the comeback from 15 points down at Williamsville North in which he scored 42 points. Alex Wayland is a threat from downtown. Adrian Baugh is a unique big man who can also drain the three.

I think West gets there and gives folks the matchup they've been longing to see all year with the Indians facing a Greg Dolan-led Williamsville South crew in the final. Dolan leads Section VI in points-per-game average at 31.1. 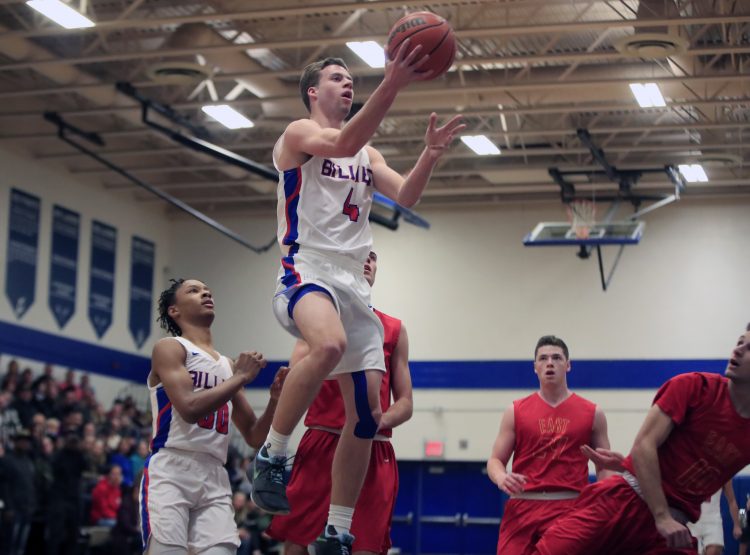 Potential sleeper: No. 6 Amherst. The two-time defending champion Tigers own wins over top-seeded Maryvale, No. 2 Cheektowaga and No. 4 Lake Shore.

PT: A very good Maryvale team has quietly handled its business and has players who like to get after it on defense, including Ray Blackwell, Rashad Law and Dylan Casey – key members of the football team who helped the Flyers reach the sectional final last fall. Flyers (17-3) have held nine foes under 50 points. That said, they still are in perhaps one of the toughest brackets and there are two teams in it that defeated them during the season (Amherst and Pioneer) along with a South Park crew that dropped a one-point decision to them.

CA: Class A-2 seems so wide open. I said East had the best shot of the Yale Cup teams to win a sectional title (in Class D) and that was 50-50. You might want to argue the same odds for South Park.

I predict that Maryvale will win because when it comes to playoff time a very important aspect is coaching and guard play, and Maryvale has that on both fronts.

PT: Let's not forget Maryvale has reached at least the semifinals 11 times the past 15 seasons under veteran coach Mark Kensy, who just surpassed 400 career victories.

Potential sleeper: Newfane. The Panthers own nonleague wins over City Honors, Nichols, I-Prep and Ellicottville. They also have two players who can control the game in Kyle DeVoogel and Max Weber -- both 1,000-point scorers for their career.

PT: Interesting bracket. Medina won the coin toss with MST Seneca and Newfane for the No. 3 seed, yet the Niagara-Orleans League co-champions seem to have the much tougher road to get to the final. If the Mustangs survive Quarterfinal Friday, likely against a good Dunkirk team that entered Wednesday's pre-quarterfinal having won eight of its last nine games, big bad Olean awaits.

PT: I know the seeding says Lackawanna should be favored as the No. 1, but it's hard to ignore Olean's past history of success – especially as a Class B school.

CA: Olean all day. With no disrespect meant to anyone else in the B-1 bracket. There are nine seasons Olean has been in Class B since 2002 and the Huskies have advanced to regionals each of those seasons, including the run to the state title in 2016.  They are as well drilled a program as there is, and I don't see that streak stopping. 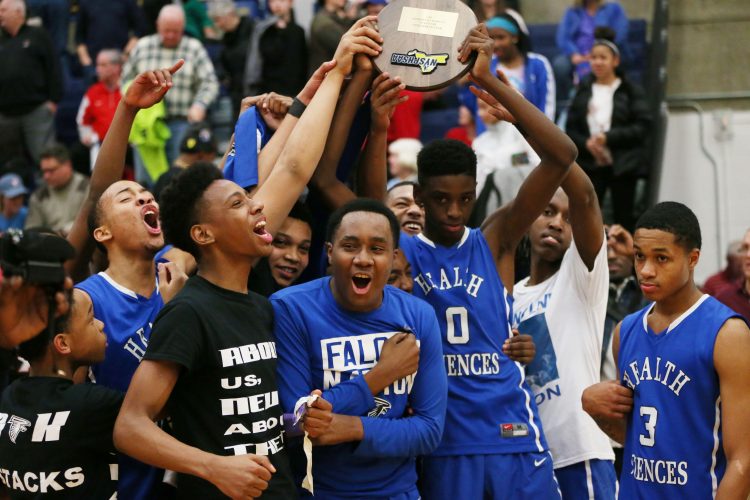 Top quarterfinal: No. 8 Gowanda/No. 9 Roy-Hart at No. 1 Middle Early College

Potential sleeper: Gowanda. Panthers won 14 games, and four of their six losses came against the top two seeds in Class C (Randolph and Allegany-Limestone). They also lost to division champions and sectional contenders Olean and Ellicottville. In other words, beware of Gowanda.

CA: It's going to be who wins that 1-4 game. … I would expect a somewhat competitive final, but let's face it. The winner of that semifinal is an overwhelming favorite to win the title.

PT: Middle College has that tough league schedule, while Health Sciences played a difficult nonleague slate – the same approach it used last year when it won the crown as a No. 4 seed. I think one of these two faces Olean in the overall Class B final March 6 at Buffalo State.

Contenders: No. 2 Allegany-Limestone, No. 3 Tapestry, No. 4 Chautauqua Lake

Top quarterfinal: No. 9 Buffalo Science at No. 1 Randolph

Potential sleeper: In such a wide-open bracket, I'm going with No. 5 Silver Creek. The Black Knights won 15 games during the regular season and split with Randolph (including a one-point loss) and Allegany-Limestone.

PT: There is not one team in this bracket I can see as a clear-cut favorite. Maple Grove served up a friendly reminder of how anything can happen when it closed the regular-season beating contender Tapestry in a nonleaguer. Defending champion Chautauqua Lake has perhaps the best player in the bracket in Devin Pope (31 ppg). A/L lost the coin flip for the top seed.

CA: Most wide-open bracket. There are at least six teams that can't be counted out. Maple Grove beating Tapestry to end regular season proves that.

PT: So too does Buffalo Science then beating Maple Grove in the pre-quarters.

Contenders: No. 2 Sherman, No. 3 Franklinville

Top quarterfinal: No. 5 Frewsburg at No. 4 Ellicottville

Potential sleeper: Ellicottville. The Eagles have Elliot Bowen – a double-double machine (20 points per game, 13 rebounds per game) with the ability to take over a game.

PT: While the semifinals at Jamestown CC figure to be must-see action will fans from East and Franklinville get what they want: a championship-game pairing?

CA: If we get East-Franklinville final, is that like an early Christmas gift? There are two games all season I've been most excited to see: They are East vs. Franklinville and Williamsville South vs. West Seneca West. … If for some reason that doesn't happen, the team that spoiled that party will be the hottest ticket in town. 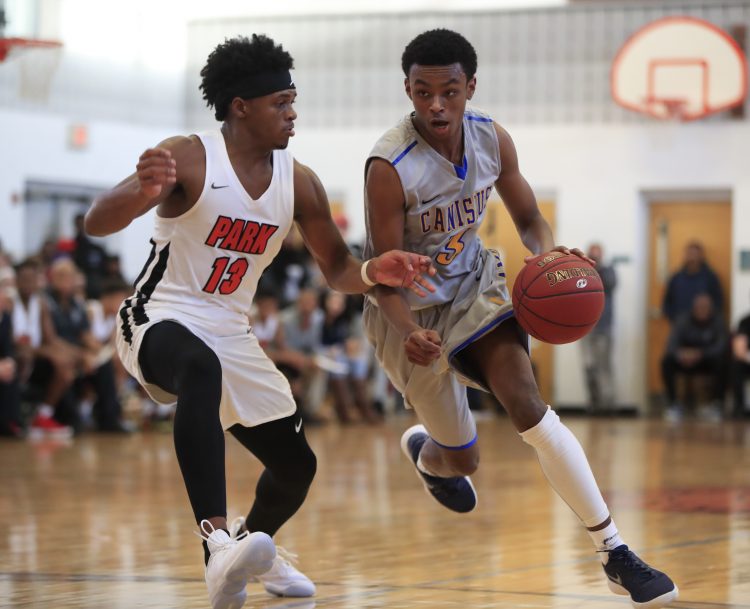 Park and Canisius split two regular-season meetings. If the teams wind up meeting for a third time this year, it will be for the Manhattan Cup Class A title. (Harry Scull Jr./ Buffalo News)

PT: The Manhattan Cup playoffs resume with semifinal action Friday. Canisius lost to just one league team all year, Park, although St. Francis pushed them to double overtime last week. Will the final feature the third meeting of the season between Park and Canisius?

CA: Yes that's what I think will happen. I think anything can happen and that's what makes this league so interesting. But I'm not going to pick against a Park-Canisius final.

Potential sleeper: Nichols, which has reached the Manhattan Cup final either in Class A or B each of the past four seasons – winning Class A in 2014 and Class B in 2016.

PT: Cardinal O'Hara beat St. Mary's twice during the season but Lancers are defending champion. Of course, Nichols has a knack for rising to the occasion in the postseason. Niagara Catholic, which lost in the final two years ago, can't be forgotten about either with its young talent. Who's winning this championship?

CA: This could be interesting. This whole bracket, it's tough to pick a winner. If Nichols wins in the semifinal you have full on hysteria and it's not something that's impossible.