Two Frank Lloyd Wright-designed homes in Buffalo – the ones that don't get all of the attention – take center stage Thursday when the Buffalo Preservation Board will propose designating each a local landmark.

It would seem like a slam-dunk, given the historic importance of the William R. Heath House and the Walter V. Davidson House.

Except for one thing: Neither of the owners wants the designation.

"They should not do this against the owner's will unless they feel there is an imminent danger to the property," said Russ Maxwell, who owns the two-story, wood-and-stucco Davidson House at 57 Tillinghast Place. "I have been a very careful and very thoughtful owner of this property, and it's in better shape than it's been in 50 years."

"We've owned the house since 1969, and we're not changing anything," said Nancy Elwood Schmid, who owns the 1908 Heath House at 76 Soldiers Place. "We're doing a good job, we appreciate Frank Lloyd Wright and feel we reserve the right to our privacy."

Maxwell and Schmid successfully opposed a previous landmarking attempt by the Preservation Board several years ago.

McDonnell stressed the landmark designation – reserved for protecting buildings of historic and cultural importance – has to do with the future.

"We want to publicly recognize that these are extraordinary houses, and to ensure for future generations that they will be protected long after the present owners are gone," McDonnell said.

"Talk about houses worthy of being on the National Register," he said. "I think most people would be surprised that they aren't locally landmarked."

The board is likely to call for a public hearing as early as March 8. They could at the same meeting vote to recommend the designations to the Common Council, which would have final say. The homes meet all of the criteria for landmarking, McDonnell said.

The Heath and Davidson houses have long been overshadowed by the Darwin Martin House, now in its final stage of a $50 million restoration, the most comprehensive ever undertaken of a Wright-designed building. Wright's Graycliff residence, the Derby summer estate also commissioned by Larkin Soap executive Darwin Martin, is also near completion.

Maxwell said he has spent a lot of money to restore the 4,600-square-foot Davidson House, a two-story stucco prairie house with wood trim painted in corn yellow and steely gray. He fears the historic designation will attract even more attention to the house than it now receives.

"I already have busloads of people get out in front of my house, and it invites people or regulators to think they have a role to play in how I manage my home," Maxwell said.

"I'm not saying I'm opposed to it forever," he said. "That time may come, but it's not that time now."

Maxwell estimates at least 7,000 people have walked through his house in the past 10 years. He calls himself a proud steward of the Frank Lloyd Wright house.

"I know it is an ambassador property in Buffalo, and I want everyone to enjoy it," Maxwell said. 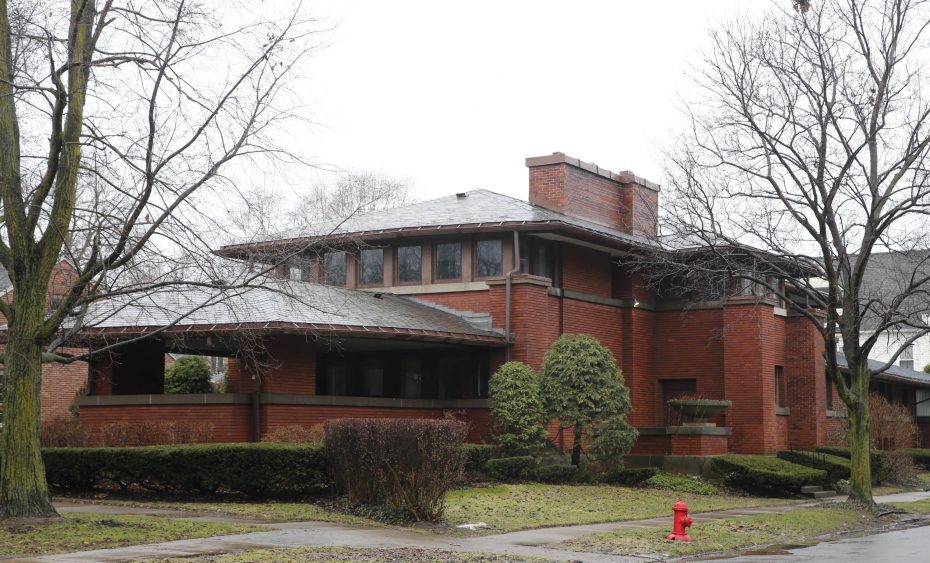 The Heath House's brick-and-concrete exterior is marked by continuous horizontal lines, with entrances along Bird Avenue. Schmid is marking her 5oth year of ownership of the 15,500 square-foot-house, having bought it in 1968. During that time, she said, she has never sold any of the Wright-designed objects or art glass windows.

McDonnell said protections are needed because there are many instances of Wright homes changing ownership and becoming imperiled.

"I think everyone is convinced they will always be maintained and protected, but that's not always the case," McDonnell said. "Around the country there have been Frank Lloyd Wright houses threatened and demolished."

McDonnell said he believes the time has come to convey the same local historic importance on the Davidson and Heath houses that has been applied to the Martin House, noting both Heath and Davidson were employees of the Larkin Soap Company whom Martin introduced to Wright. Heath was the advertising director, Davidson a company attorney and vice president.

"All of the Wright houses in Buffalo are the result of probably one of the greatest patrons Buffalo has ever seen, Darwin Martin," McDonnell said. "He probably gave Wright the largest collection of projects in Buffalo he had ever had."

McDonnell said the designations would bring deserving attention to Tillinghast Place's collection of arts and crafts homes, Sears catalog homes and Georgian style homes. Likewise, the Heath House designation would put into relief the rarity of a Wright-designed house on a circle designed by Frederick Law Olmsted.

"You have two masters in Wright and Olmsted," McDonnell said. "It doesn't get much better than that."

But Schmid, who lives in Williamsville, said she doesn't want the added fuss she fears the designation could bring.

"I'm so angry that they are still trying to do this against our wishes," she said.