Deer seasons are currently closed in the Empire State. However, nothing is stopping you from pursuing another popular pastime – chasing the antlers that adorn the heads of whitetail bucks each summer and fall. It’s a great way to continue the hunt … looking for the antlers once they’ve fallen off or “shed.”

Yes, the antlers fall off every year, only to grow back, a process repeated process annually. Antlers on whitetail bucks are the fastest-growing bone material in the world, blossoming to racks of up to 200 inches or more for special mature animals. Starting some time the end of March or beginning of April, the antlers will begin the growing process through a circular spot on the skull called the pedicle. The main part of antler development will take it into August, roughly four months of growth.

As the antlers grow they are soft to the touch. The velvet on the outside supplies the blood that carries the nutrients and oxygen that allows the bone to develop. It can grow as much as a half-inch in a day.

As the amount of daylight diminishes and the antlers start to harden late summer, the velvet on the outside of the antlers will start to come off, with the help of some rubbing by the buck against small trees and brush – buck rubs. Things will start to intensify internally for the bucks as they prepare for the annual rut – breeding time for the deer every fall. After the rut is over, the drop in testosterone causes the antlers to drop off. It could be in December or it could be in March. Every animal is different.

Just like the regular season hunting pursuit every fall, though, there are tips and precautions that you should take into consideration before you start tramping through the fields and forests seeking a bony treasure that could lead to further rewards. 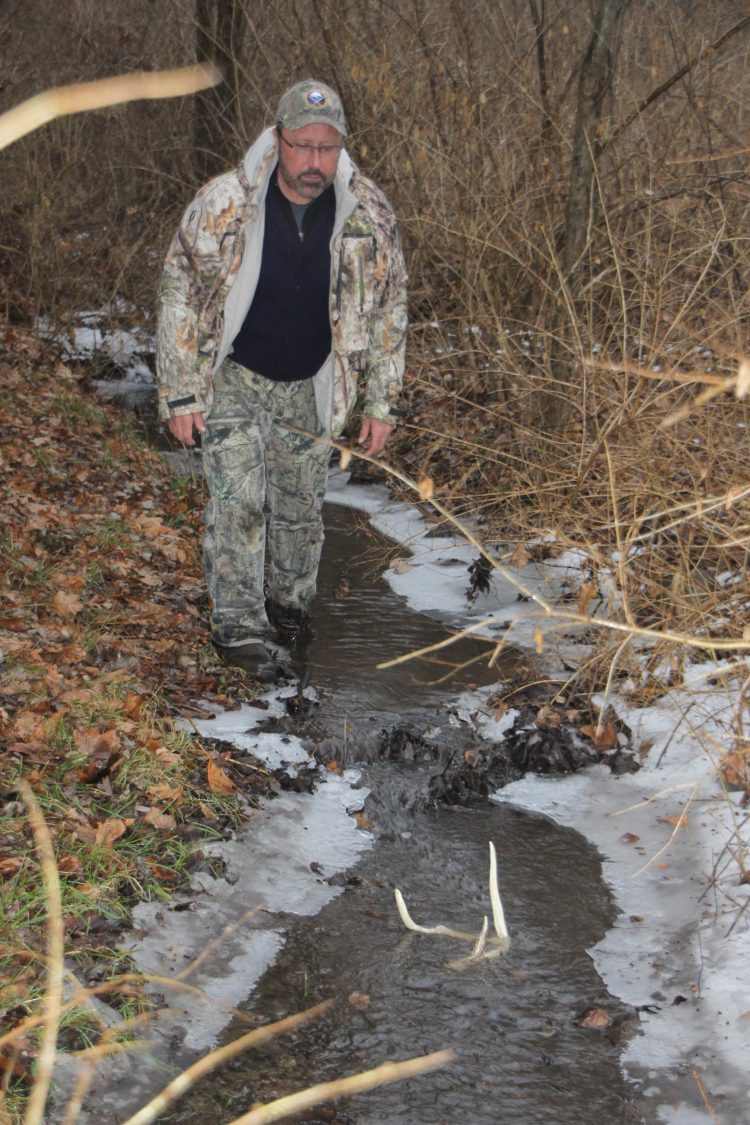 Arnie Jonathan of Lockport finds a shed on the ground walking along a stream.

“I look forward to antler shed hunting every year,” said Arnie Jonathan of AJ’s Guide Service out of Lockport. “It creates a certain level of excitement and accomplishment when you find a set of antlers or even a small spike.”

With the current age of technology at our finger tips, Jonathan takes full advantage of equipment like trail cameras. “They are a great way to monitor animal movement in certain areas even after the season is over. They even have them so that you can monitor by phone or computer. I physically must pull the memory card from the camera to see what I have. I can see when a buck drops his head gear. It also lets me know that a particular buck has made it through the season if it’s an area you hunt regularly. And if those deer still have antlers, I’m not going to be exploring early and take the chance of pushing that deer into another area.”

The same logic would apply to high-traffic areas where no hunting is allowed and there are plenty of deer. “I personally stay away from high density deer areas like Lockport, North Tonawanda, Amherst and Hamburg,” Jonathan said. “I don’t like running into people when I’m shed hunting. Even shed hunting in residential areas can be tricky. Too much pressure can send the animals behind someone’s house or business, to an area that you won’t be able to recover a trophy.”

The best spots to look for sheds? If you know where there are areas that deer frequent, that’s always a good spot to start. “I’ve found that antlers are generally found in or close to a buck’s core area if he hasn’t been pushed out,”  Jonathan said. “Look for food sources like apple orchards, corn and soy bean fields. Clover fields are good to check out as well. Pay attention to the trails. If you find a well-worn game highway leading from the bedding area to the food source, pay close attention.” 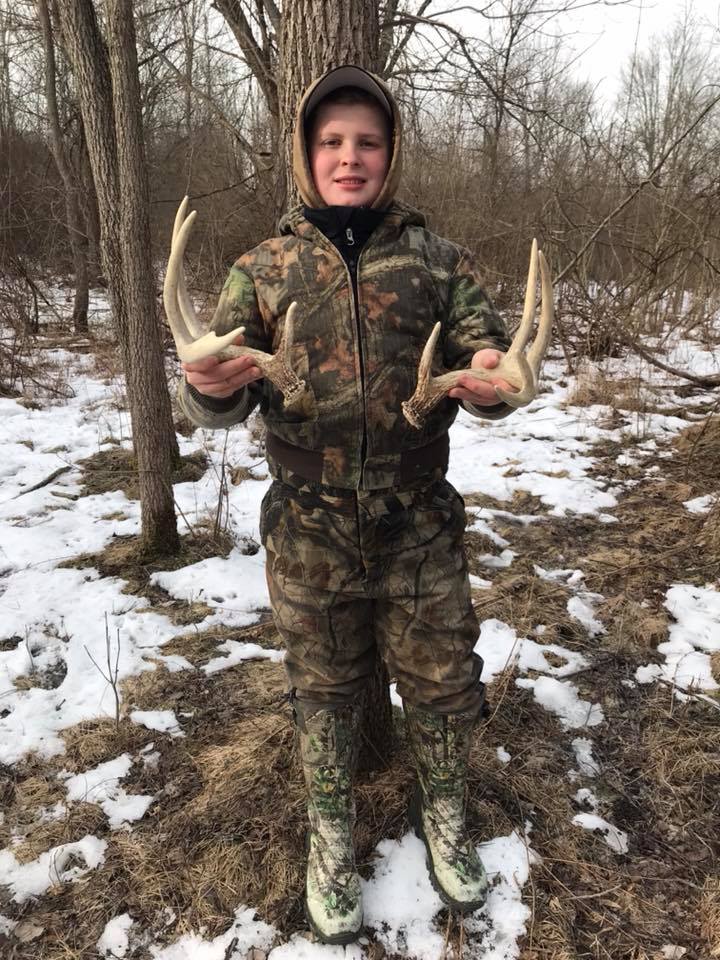 Keegan Walczak of Amherst shows off a double matching set of antlers - a lucky find.

Antlers could fall off at any time and any place. Jonathan recommends looking around ditches, logs, streams or other obstacles that could cause a deer to jump. When they do, they just might knock off their antler jewelry. Look for an antler shape when scanning the ground, be it a single point or the base of the antlers.

“In my younger days I trained my yellow lab to actually find sheds,”  Jonathan said. “At first I brought him along for the walk but it wasn’t long before he got the hang of it. We would play fetch with a shed and he would retrieve it at first. I would praise him over and over when he picked the antlers up. It wasn’t long before he found some on his own. He got better and better. His best day he had a triple but could only carry two sheds at a time. That particular day he found nine sheds.” 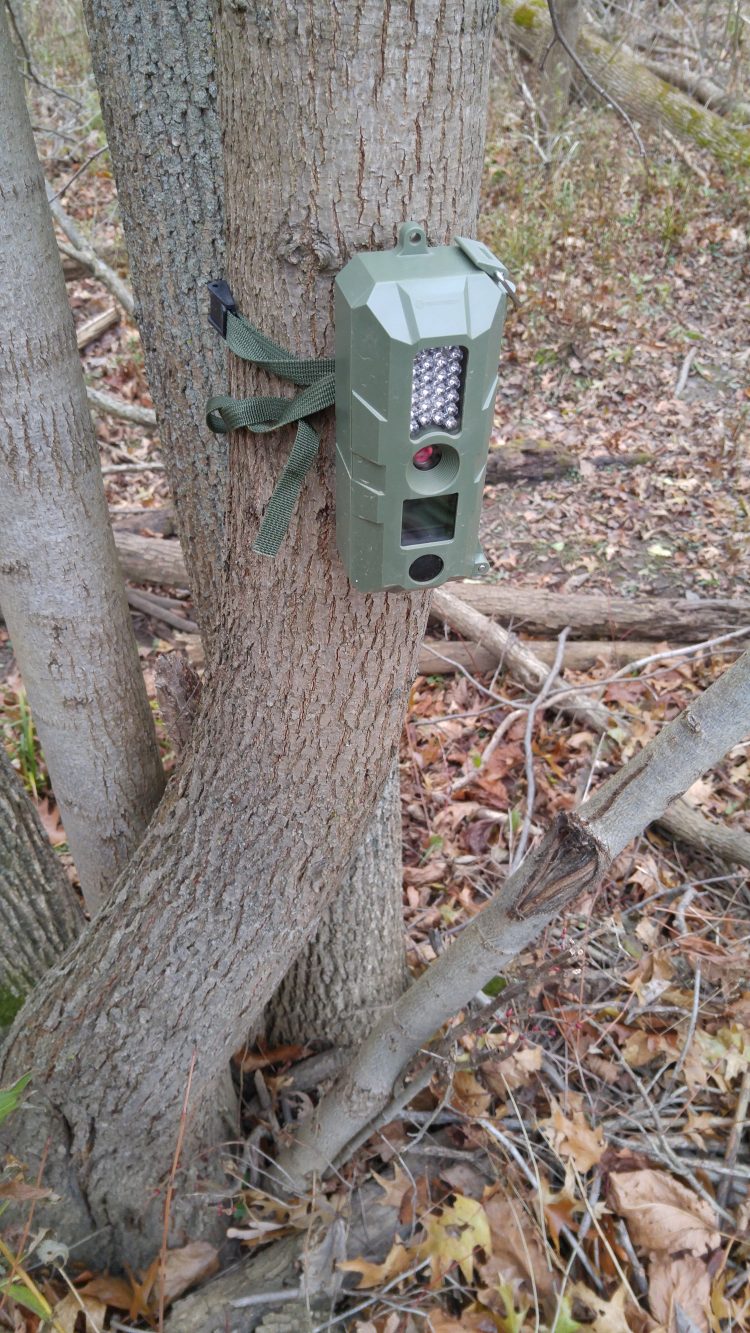 Trail cameras can be used to help identify when a buck finally drops its antlers.

“There are companies now that sell shed-finding kits for your dog. I never had to use one. Nothing beats good old-fashioned time spent afield.”

If you know an area that has rubs and scrapes from bucks, those can also be a good location for finding sheds. “I’ve found quite a few like that,” Jonathan said.

Big bucks offer a very special prize every year. If you happen to be lucky enough to collect both sides of a deer’s head gear, you can give it a rough score and see how big a particular deer is.

Of course, you don’t have to be a hunter to enjoy a shed hunt. Some people will use found sheds for lamps, knife handles and other household items. Jonathan loves to polish them up and make key chains (or other small items) from the tines, using them as little gifts – a piece of something that he’s connected to.

Antlers don’t last very long in nature. Rodents and other small mammals will seek out the bones and gnaw on them for calcium and other nutrients. They also gnaw on them to manage teeth growth. The race is on. First come, first served on deer antlers. Join in on some of the fun. You may even find a surprise rack from a buck you didn’t even know was hanging around.