When investigators arrested Andre Jenkins for the murders of two fellow Kingsmen, they overlooked the real killer, defense lawyers told a jury Wednesday.

They also missed the boat on who was behind the effort to turn the Kingsmen into a “one-percent” club capable of competing with other outlaw biker gangs engaged in criminal enterprises, the attorneys argued.

But over and over again, the defense used its opening statements in the trial to suggest that, yes, a terrible double murder took place, but the wrong Kingsmen Motorcycle Club members are being prosecuted.

More than once, Connors suggested that the FBI investigation into the murders of Kingsmen Paul Maue and Daniel "DJ" Szymanski fell short, an allegation echoed by others on the defense team.

Collectively, they pointed the finger at other Kingsmen, most notably Filip Caruso, a co-defendant in the case scheduled to go on trial later.

To hear the defense tell it, Caruso was a drug dealer and a "one-man crusade" in support of the move to a one-percent club. He also had an ax to grind with Maue, who had recently shot and killed Caruso's dog, the lawyers said.

At some point, Caruso left the club to join the Nickel City Nomads, another local biker club, but continued to "wreak havoc" on the Kingsmen.

"He's a violent character," said defense lawyer Barry N. Covert. "He was out of control." 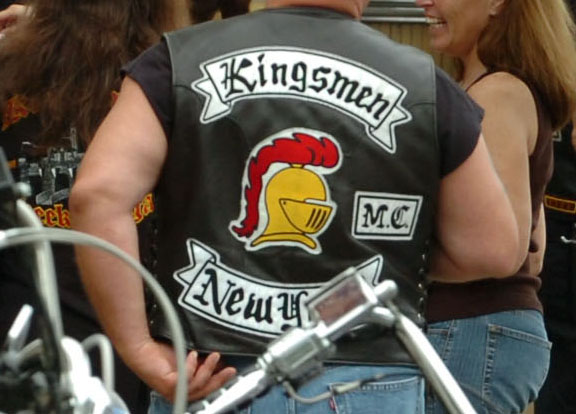 The Kingsmen patch — the well-known knight's helmet — used to be a common sight on local roadways. (News file photo)

Caruso's defense attorney, contacted by The Buffalo News, dismissed any suggestion that his client was involved in the killings or the move to become a criminal organization.

Even more important, perhaps, federal prosecutors claim Caruso was Pirk's initial target and that, when that effort failed, Pirk turned to Maue and Szymanski.

"The evidence will show that Filip Caruso was an intended victim," said John P. Pieri, his defense lawyer. "It was only because he was able to outsmart Andre Jenkins that he's still alive today."

Pieri told The News that Pirk's defense is rooted in his earliest statements to the FBI when he and Enix suggested Caruso might be the killer.

The defense strategy is also in sharp contrast to the prosecution's claims that it was Pirk who ordered the 2014 murders of Maue and Szymanski outside the club's North Tonawanda clubhouse to send a message to members opposed to him.

Prosecutors also claim it was Pirk, who became national president in 2013, who led the effort to turn the Kingsmen into a "one-percent" club. They claim his goal was to expand its national reputation and footprint by competing with the Pagans, Outlaws and other one-percent clubs engaged in crime.

Defense lawyers claim the government's case depends greatly on the testimony of Kingsmen who have already pleaded guilty and agreed to testify against Pirk, Jenkins and Enix. They claim many of those witnesses have already testified falsely before grand juries.

"Their stories change over time," Covert told the jury. "And you will see that. You're also going to learn that the witnesses have their own motivation."

All three attorneys suggested that their clients were dead set against the move to a "one-percent" club and, to the contrary, fought to keep the Kingsmen clean.

"He was a peacemaker," Meyers Buth said of Pirk. "He was just trying to hold the club together."

Connors said the government's investigation into Enix missed a number of important facts, including his 30-year career as an auto worker or time as a volunteer firefighter.

"Why didn't they tell you that?" he asked the jury. "Shouldn't you know the entire picture of a man? We'll make sure you do."

Founded more than six decades ago, the Kingsmen have been a constant presence in the community, their gold knight's helmet with the red plume on top a frequent sight on local streets and highways.

In 2016, a federal grand jury indicted 16 members, charging them with drug dealing, gun sales, acts of violence and operating a criminal conspiracy and, since then, the local Kingsmen chapters have been dissolved.