LEWISTON – Canisius got the best of Niagara Wednesday night in a rematch of MAAC championship contenders, using depth, defense and a second-half surge to earn a 95-88 win that kept it alive for the conference’s No. 1 seed.

But what Canisius really wants is the No. 1 seed, which comes with an auto-bid to the NIT. To do that, Canisius needs at least one loss from Rider (14-2). Then it would come down to tiebreakers: If both schools end up with the same record, Canisius takes first place if Iona finishes third and Rider would win the tiebreaker if Niagara finishes third, due to their head-to-head results against those teams. Rider closes at Monmouth (10-18, 6-10) and versus Iona (16-12, 10-6).

For Niagara (18-12, 11-6), the message from the loss was not to get too down on themselves, even with Scott out. The Purple Eagles have already clinched a first-round bye with one game to go.

“If everything plays out – they do their thing, we do our thing – hopefully we see them again,” an emotional Prochet said he told his teammates after the game. “We’re good. That’s it. That’s from me being a captain and letting them know that nobody be down off this loss. We’re going to be good. We just need to work harder, Matt’s going to have to get, you know, healthy – we’re relying on that, but we’re not really relying on that because we believe in each other, every player on our bench can play basketball." 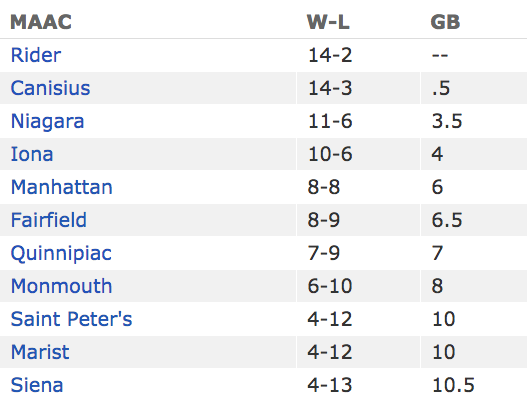 What Canisius learned about itself Wednesday was how deep it can go. Point guard Malik Johnson played only three minutes in the first half due to foul trouble as four of the Griffs’ five starters picked up two fouls in a tightly whistled first half. Canisius coach Reggie Witherspoon fought the urge to roll with his studs, trusting backups Spencer Foley, Jibreel Faulkner, Jonathan Sanks, D.J. Heath and Marcale Lotts to keep the game close.

Niagara led 40-37 at halftime, but the Griffs starters opened a gap with a 13-2 run midway through the second half, fueled by eight points and an assist from Reese. Niagara never recovered.

“I wouldn’t consider them bench guys,” Reese interjected during a question about the importance of the Griffs’ reserves. “We’re all on scholarship for a reason. They’re capable of playing the same game we are. They got their opportunity and stepped up. I think we went into the half down three, so they did an excellent job. Credit to them.”

Canisius shot 50.8 percent in the game while scoring 58 points in the second half. Teams combined to shoot 63 free throws on the night.

Scott out: Niagara’s Matt Scott, who ranks second on the team and third in the conference in scoring at 19.5 points per game, missed his second game due to a sprained ankle. He wore black Nike joggers, a white “friends don’t let friends go to Canisius” T-shirt, one Jordan sneaker and one walking boot, along with a pair of crutches.

Niagara coach Chris Casey was asked if he’s expecting Scott back for the conference tournament.

“I don’t have any expectation either way. He’s day-to-day,” Casey said. “He’s going through his (physical therapy), he’s been cleared to start that. He’s making progress. So he’s got to go through the process and hopefully he’ll be back sooner rather than later. But like (Prochet) said, the roster right now is the roster. So every guy in our room can make plays too. We were right there. We make a couple more shots, make a couple more stops, we have a chance to win the game. So we’ll have that attitude when we go to practice tomorrow and that attitude when we play on Friday.”

Road warriors: Coach Reggie Witherspoon, who turned 57 Wednesday, has now earned wins in every away gym in the league in just his second year with Canisius.

Griffs domination: The win sealed a ninth straight Canisius victory in the Battle of the Bridge, the all-sport, season-long competition between the two schools. The win increased the Griffs’ lead to 21-3 lead, putting it out of reach before spring sports meet.

Next: Both teams have one game left before the MAAC Tournament. Niagara closes the regular season Friday with a home game against Marist, and then the Red Foxes head to Canisius Sunday.