The warmest day since October arrived Tuesday in the Buffalo Niagara region -- and it broke a record.

The 1 p.m. reading broke a 63-year-old record for the high temperature on a Feb. 20 and tied for the sixth-warmest temperature for any February day in the city's recorded weather history.

By Tuesday afternoon, 1.36 inches of rain fell over a 24-hour period in Buffalo.

The precipitation resulted in more than 50 sewage overflows from wastewater treatment plants across the region, including in Dunkirk, West Seneca and the Niagara Falls outfall at Falls Street, according to reports from the NY-Alert system.

But even with all the rain, there was no significant flooding reported across the region because most of the ice and snow had already melted.

"A lot of the rivers are just open, there's no ice jams on them," said Aaron Reynolds, meteorologist at the National Weather Service. "If we would have had a snow pack around here, and this rain and warmer weather, it would have been a different story."

It was a different story east of the region in the North Country where flood watches were posted. There was still a lot of snow on the ground in Jefferson, Lewis and Oswego counties, Reynolds said.

Tuesday's unseasonably warm weather, which was more than 30 degrees above normal, was spurred by a southerly flow of air from the Gulf of Mexico. 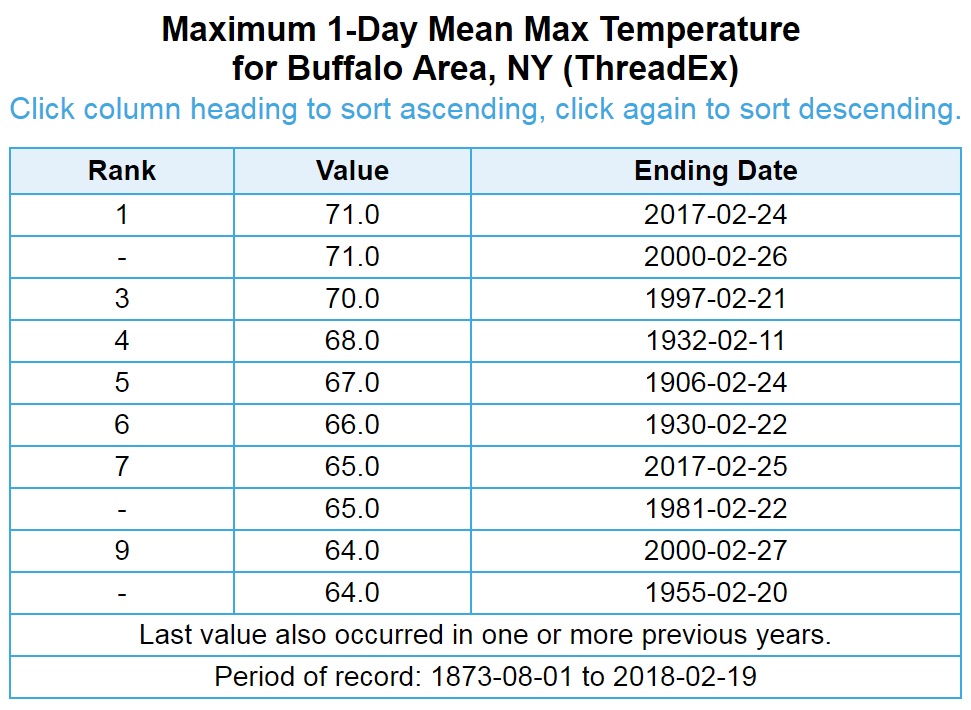 A strong cold front will send the region back to winter later on Wednesday.

Temperatures are forecast to drop from the 60s in the wee hours of the morning down to the 40s by lunchtime and 20s again by midnight, the weather service said.

There's a 40 percent chance of snow showers again Thursday with highs in the upper 30s, but Reynolds said a more moderate weather pattern is expected to persist through the end of the month.

"In the long-range, there's no significant Arctic air outbreaks," Reynolds said. "The trend is even going to be a little bit above normal for the rest of the month."

Because of that, Cheektowaga announced Tuesday it suspended the town's overnight parking restrictions.