LEWISTON – Short of making a Cinderella run through the conference tournament, the best way for a middling college basketball team to feel like it made something of its season is to win the rivalry game.

The Canisius women’s basketball team checked that box Tuesday night by keeping Niagara star Victoria Rampado in check and overcoming 20 turnovers to beat the Purple Eagles at the Gallagher Center, 72-66.

But given the logjam in the conference standings, Canisius isn’t ruling out that tournament run, either.

“Our league is not great this year,” veteran Canisius coach Terry Zeh said after his team improved to 10-18 overall and 8-9 in the MAAC with one game remaining.

“Nobody won nonleague games, except for Quinnipiac (which is 22-5). So we sort of have to throw that out," Zeh said of their overall record. "We’re in the thick of everybody else in the league. After Quinnipiac and Marist, I think nine wins is third place right now; some people have a chance to get to 10. So, we’re in the thick of that. I’m proud of how we’ve battled and got ourselves in good places.” 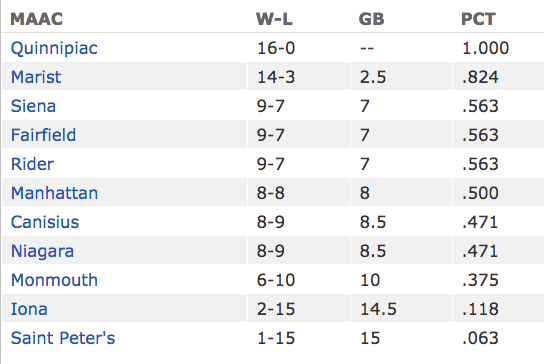 Canisius and Niagara (11-18, 8-9) are currently tied in seventh place and look bound for the play-in round at the conference tournament, though they could sneak into the MAAC’s top five depending on the results of other games this week around the conference.

“It’s going to come down to the last day,” Niagara coach Jada Pierce said. “Terry and I were talking about that before the game. It’s one of those things where we’re not going to know until Sunday night where we are. Whether we win or lose on Saturday at Marist, we’re still not going to know because there’s more games to be played on Sunday.”

Canisius shot an unusually high 47.1 percent from the field Tuesday – well above its season average of 35.8 percent, which ranked 327th nationally – while Margret Halfdanardottir and Sara Hinriksdottir, Canisius’ Icelandic duo, scored 19 points each. Junior guard Maria Welch had 10 points, six rebounds and four assists in 23 minutes in her return to action after missing five games with a concussion.

Jai Moore matched a career-high 20 points for Niagara, though Canisius did a good job limiting its top two scorers. Rampado, the NU career scoring leader, was held to 16 points on 5-of-14 shooting while Kaylee Stroemple scored 12 points on a 2-of-7 night and was held without a field goal until the final minute.

“I think I beat myself,” Rampado said. “I didn’t make the layups I usually make. I mean, they did have great help-side (defense) – well, I mean, every team has good help-side – so I think I just need to capitalize on my layups.”

"If you let those two get going," Zeh added, referencing Rampado and Stroemple, "you can't beat them. You just can't. They're that good."

Rampado watch: Rampado, who broke the program scoring record on Sunday by passing Eva Cunningham’s 1,753 points (2005), entered the game ranked 18th nationally in scoring at 21.0 points per game and was one of only 30 players in the country to average at least 20 points. Tuesday's game dropped her average to 20.9; the Niagara record for season scoring average is 21.6 ppg, set by Samantha Davis in 1993.

Next: Canisius closes out the regular season Friday at Siena while Niagara wraps up Saturday at Marist.