She was with her 3-year-old son, Rayon, at their home on Wyoming Avenue, a block away from the headquarters of AMR Medical Transportation on William L. Gaiter Parkway.

"Was it a gunshot?" she thought.

Then she heard the second explosion.

Vives looked out her back window to see black smoke and firetrucks.

An AMR ambulance that had been idling by the maintenance bay had caught fire late Tuesday morning, and then tanks of compressed oxygen inside the burning ambulance blew up, sending shrapnel hurtling through the air in a 100-foot radius, Buffalo fire officials and AMR representatives said.

The force of the explosion threw a maintenance worker who was outside up against a wall and set off an airbag inside the pickup truck of a second AMR employee who was trying to move it away from the burning ambulance.

Incredibly, they were the only injuries. 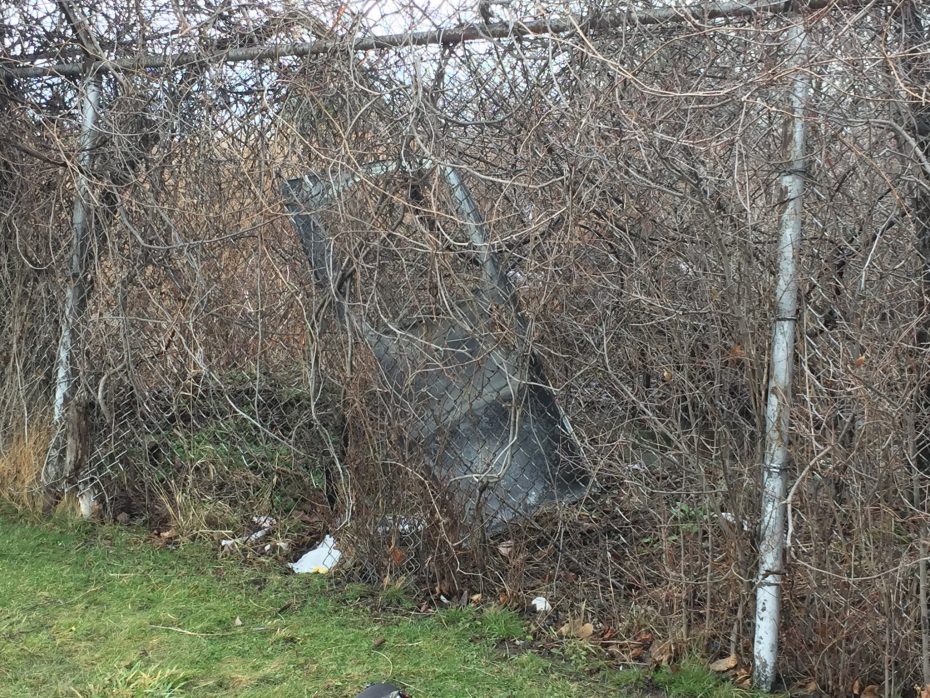 The door from the ambulance was blown 50 feet away and over a chain link fence. (Maki Becker/Buffalo News)

Flying debris damaged 20 to 30 cars in the lot. Shrapnel shattered windshields and rained chunks of metal, safety glass and medical gear all over the worker's cars. One of the ambulance doors flew about 50 feet away, ending up in a crumpled mess on the outer side of a chain link fence that surrounds the lot.

Neighbors who live on Northumberland Avenue, a block away from the scene, later reported that pictures fell off their walls.

Firefighters were en route when hey heard explosion and saw plume of black smoke. “We are very lucky no one was more seriously injured.” pic.twitter.com/rc2x7yoXpQ

Initially, one ladder truck and one engine truck were dispatched to the scene, Bossi said. But as the crews were headed to AMR headquarters, an explosion was reported. Then the firefighters heard a boom and saw heavy black smoke. Additional crews were brought in.

Firefighters battled the blaze which spread to the exterior of the AMR building. Meanwhile, the AMR building was evacuated, although dispatchers stayed behind to continue taking emergency calls, said Tom Maxian, regional director for AMR.

Lt. James Otwell, commander of the Buffalo Fire Investigation Unit, said the cause of the fire had not been determined but that there was no reason to suspect that it was anything other than an accident. 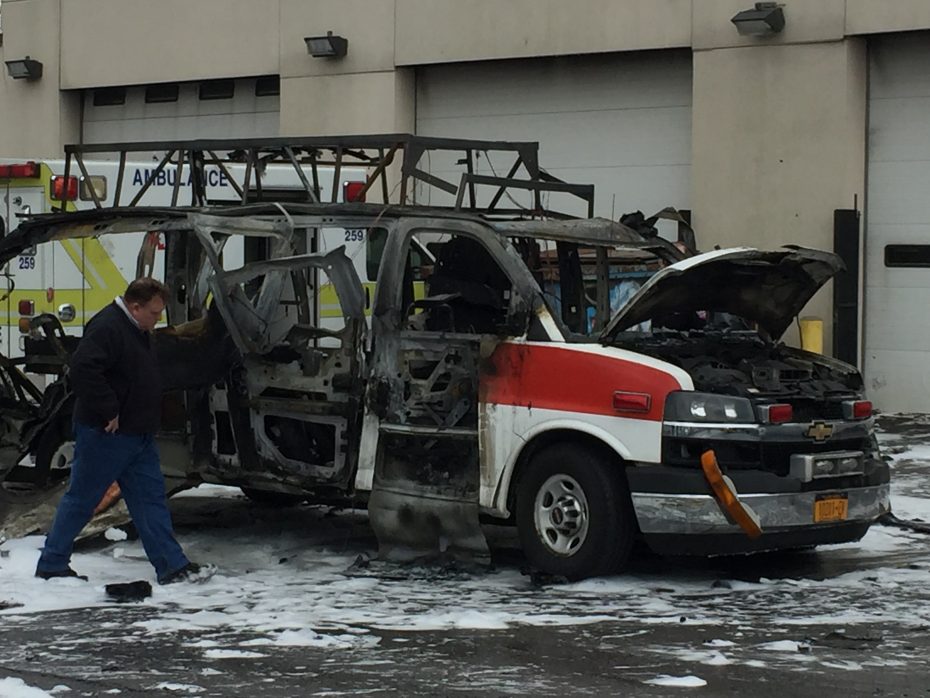 James Otwell, the commander of the Buffalo Fire Investigation Unit examines the charred remnants of an AMR ambulance that exploded in the headquarters parking lot Tuesday. (Maki Becker/Buffalo News)

Once the fire was out, he and his investigators probed the blackened remains of the front of the ambulance, a Chevrolet valued at about $100,000.

He pointed to a blackened shard of metal sticking out from the outer wall of the AMR building. There also was a puncture hole in the wall. The mangled remains of what looked like an air tank lay on the ground amid a thick layer of firefighting foam on the ground.

"The potential for fatalities was seconds away," Otwell said.