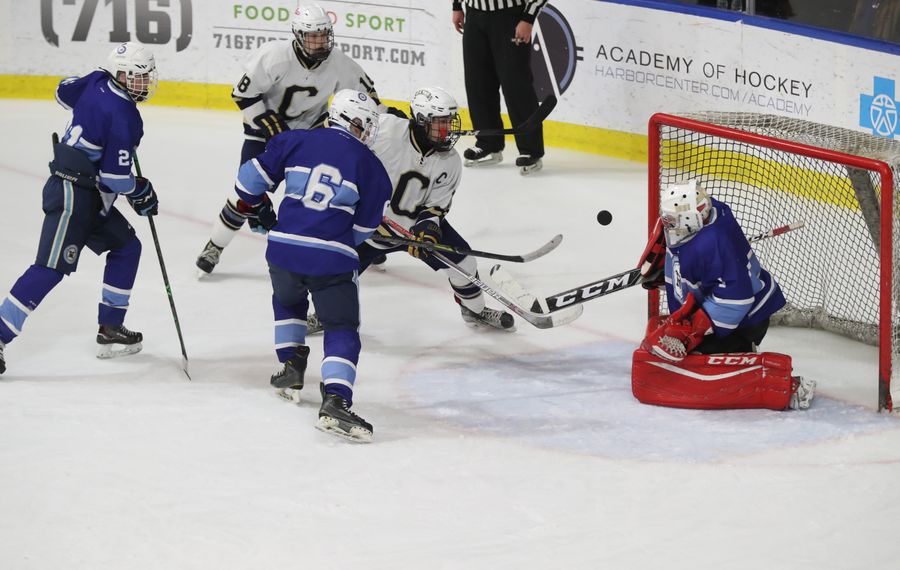 The team that's supposed to be done playing hockey by now has at least one more game left, and it's a mighty important one against a St. Joe's program that almost always seems to be playing in the big game.

St. Mary's, the lowest-seeded team in the Niagara Cup playoffs, will get to play for a championship in its return season to the Western New York Varsity Hockey Federation. The Lancers will do so against the winningest program in the history of the league.

St. Mary's, the upstart No. 5 seed, took down top-seeded Canisius, 4-0, in the first of two Niagara Cup semifinal contests Monday night at the HarborCenter.

Daniel Pfalzer scored two goals, while senior goalie Cameron Ruggerio stopped all 36 shots he faced in securing the Lancers' spot in the 8:30 p.m. championship game next Monday at KeyBank Center.

"It's a dream come true," said Pfalzer. "First year in the Fed, we're in the finals. We're the underdogs. We're not supposed to be in the final."

They are and they get to face two-time defending state Catholic champion St. Joe's. The second-seeded Marauders defeated No. 3 Bishop Timon-St. Jude, 8-0, in a contest that marked the return of senior defenseman Shane Scheeler to the St. Joe's lineup.

Scheeler had been sidelined since suffering a severe injury in a Dec. 2 game on a freak play. On a simple dump-in play near the boards, another player's skate sliced the tendons and an artery near his wrist while trying to follow through on a check.

"It felt good being out there with the boys," said Scheeler, who earned an assist on the Marauders' last goal. "It's always good to get on the scoresheet. Overall it felt good to be back out there."

That first Niagara Cup semifinal, though … who saw that outcome happening?

The Lancers, who dropped hockey after the 2014-15 season and returned to the ice as a club team last year – winning a championship at Super Sunday along the way.

"That was a great hockey league and that prepared us for here," Lancers coach Mark Dantonio said of St. Mary's brief time in the Western New York Club League. "I told the boys. This is history in the making. Two years ago we didn't even have a hockey team. We sat idle. We got a bunch of kids to come together and believe in what we're preaching."

Ruggerio tracked pucks through traffic and simply playing big. The Crusaders held a 15-3 edge in shots after the opening period. The Lancers fired the first two shots of the second period. Brendan Krawcyzk's found the back of the net as he scored off a goal-mouth scramble just 53 seconds into the frame.

It stayed that way for a while because of Ruggerio. The 5-foot-8 senior's biggest save came with 7 minutes, 7 seconds left when he denied Cole Beiter's breakaway chance with the rebound chance trickling toward an open net yet somehow staying out long enough for Ruggerio to reach back and freeze it.

"I just tried to be quick side to side," Ruggerio said. "After it went off my pad, if my defense wasn't able to get a stick on it, it would've headed straight into the net."

"He stood on his toes on that one," Pfalzer said.

Twenty seconds later, Pfalzer's wrist shot from the right dot off a rush snuck through the arm and body of the Canisius goalie to make it 2-0. The Lancers made it 3-0 off a 3-on-2 with 5:15 left as Robert Stoklosa received a pass of a give and go from Brent Casillo but instead of skating behind the net, quickly moved to the front and stuffed in a backhand shot.

Pfalzer's empty-net  goal with 59 seconds left capped the Lancers' first win against Canisius. It prevented the Crusaders (14-7-3) from reaching their fourth straight final.

"They believe in each other," Dantonio said. "I can't say enough about our kids."

While St. Joe's coach Rich Crozier was thrilled to see his team score eight times, it was even better for him to see Scheeler, an alternate captain and returnee from last year's championship outfit, back on the ice with a chance to end his final season on a positive note instead of as a spectator.

"To be perfectly honest with you … In my mind I always kind of thought it was a long shot (he'd return)," Crozier said. "The kid was so determined.

"For me, I've been involved in hockey a long time. This is my 10th season at St. Joe's and there's no better comeback story for us. We were worried we almost lost him. There are a lot of blessings on this team and we thank the Lord for that one."

Scheeler, who did not start, received applause from fans and a "We've got Scheeler" chant from St. Joe's student-section known as The Rowdies when he took the ice for his first shift. "I deeply appreciated that," Scheeler said.

Seconds after he stepped off after his first shift, Patrick Gilbert broke a scoreless tie just 1:22 into the game. The Marauders (16-5-5), unbeaten in their last 10 games, struck four times in the second period and thrice in the third to put it out of reach.

Max Wopperer had two goals and had an assist, while CJ Goss, David Matthew, Will Redding, James Grable and Jayden Baldinelli also scored. Ben Weppner made 11 saves for the shutout.